What sort of blog about France would this be if we didn't include the occasional post about snails? The French do eat snails, and we periodically catch some old lady collecting her supper by torchlight under the château ramparts.

Sea snails are also popular, and frankly, tastier in their own right (as opposed to being something for your garlic butter to stick to). In France they are called bulots, in England they are whelks, and in Belgium, where they can be bought cooked in bouillon as street food, they are escargots de Bruxelles. In France they are most often served cold, and you can encounter them as one of the choices at lunchtime in restaurants that serve a buffet style entrée. 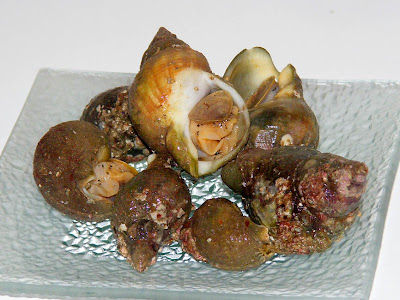 Like most seafood they must be cooked for a very short time or they turn into the most dreadful rubber. You also need to scrub them well before cooking to remove grit and growths that might fall off in the cooking. To eat them hook them out with a fork or toothpick, pop them in your mouth and bite off the hard 'foot'. At this time of year they seem to be producing roe at the other end, which is delicious - rather like liver in texture and flavour.

Hi Susan, The first time I had 'bulots' was in the little harbour village of Etaples on the Northern French coast. They came straight of the boat, were freshly cooked and simply sublime. During that same stay we had some more which we bought at a fish shop in another seaside village. They were, chewy, slimy and utterly disgusting. I haven't eaten 'bulots' since!

Martine: yes, I've had some fairly chewy ones in my time, but never disgustingly slimy thank goodness. The ones above I bought fresh from the market in Preuilly and cooked myself. They were good.

My worst meal I ever had in France involved bulots. It was in Gigondas. Bulots were the entree and the plat du jour was "pacquets" - sheep cooked in its own stomach.

In two or three words : NO THANK YOU!

Roe from the other end is truly the proverbial straw!!

I'm pretty good with trying anything once but these are just too big and don't look like very appetizing to me. But I'd still try them given the chance.

I've eaten bulots often in Normandy and I like them. With mayonnaise. They can be a little rubbery but if prepared correctly not overly so.

The word escargot is funny in French. When I've described bulots (small whelks) or bigorneaux (periwinkles) to French friends as escargots de mer, they have looked at me strangely. Escargot is not the generic term in French that "snail" is in English. The bulot or bigorneau is not an escargot de mer but a gastéropode marin. I think.

Ken: Bulot = escargot de mer on this French website http://www.marmiton.org/recettes/recette_caricoles-comme-a-bruxelles-traduction-escargots-de-mer-ou-bulots_4, which also gives them another name - caricoles. Maybe it varies from region to region.

VdV & Jocelyn: you wimps :-) I don't really blame you though. So many people have bad experiences with this particular dish. It is easy to cook them badly I think.

Susan, I think the escargot de mer term might be Belgian. Martine can tell us. My reading says the term is more often applied to the bigorneau than to the bulot. But it's more descriptive and comparative than a name that people actually use in France.

Anyway, I like bulots but I don't know if I've ever eaten bigorneaux (periwinkles). I wonder how they compare. They are much smaller.

By the way, the link in your comment above doesn't work for me.

Ken: I don't think I've ever had bigorneaux either.

Definitely not a bulot or bigorneau. This 'SDF' (Sans Domicile Fix = homeless creature) bears no ressemblance with the above mention bulots. Sorry I can't help you out :).

BTW, I just love 'bigorneaux', especially if they have been cooked in a spicy broth with lots of hot little red peppers! They make a great apéro dish.

Martine: Hmmm...since the very nice picture of a sea slug in your link is also listed with 'reptile' as a key word, I don't think we can trust this as a source :-)