This morning, up from the south-west, came not a tempest like Xynthia, but an entirely different, and entirely welcome phenomenon.

The cranes* are on the move, from their winter homes in Spain, and they are now flying over central France on their way to their staging post lakes on the French-German border where they will rest up before heading to Scandinavia and nearby countries to breed in the summer.

I was just about to start the washing up when I heard the unmistakable racuous calls. I picked up the camera and rushed outside. Simon, who had been down at the orchard putting stay wires on the trellis, came roaring up the driveway at well over the speed limit, beeping the horn. They had flown right over him and he was worried I would miss them. Also, the batteries in his camera had gone flat just at the most inappropriate moment and he was looking for a fresh set. 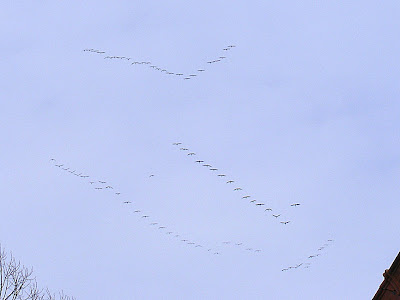 This first flock was close to 200 birds and had flown quite low over the orchard. Simon had been hearing the calls for about thirty minutes as they approached, but assumed it was crows mucking about in the poplar plantation, because he couldn't see anything. Luckily they then spent quite some time over Preuilly, wheeling and milling about as they rose on a slight thermal. I was so excited all my photographs are rubbish but fortunately, a second, smaller flock came over later in the day and I got some shots which are presentable. They fly so high it is impossible to get really outstanding photos without a proper professional camera (I just have a Fuji Finepix, which I love, but I must accept I will never win wildlife photographer of the year with it). 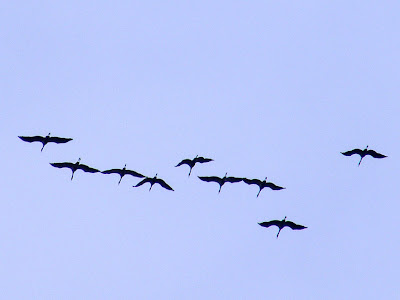 I told the baker when I went to buy bread at lunchtime that the cranes were here and she said 'Super!' (and then asked me what the English word for zéro was). Then I ran into Mme C. in the street and told her. She said 'Ah, une bonne signe! It means winter is over!'

It's true. The cranes are the very best harbingers of spring, and everyone looks forward to their arrival. Preuilly is on the fringes of their migratory route, so a couple of hundred is good. Places which are squarely underneath the main traffic will see (or hear) thousands go through. To emphasis the coming of spring, Simon saw the first butterfly (a yellow Brimstone) and I saw the first Violet Carpenter Bee.

That is good news. I think I saw a small flock yesterday flying in that familiar V formation. They were very high and I just assumed they were geese. Maybe they were cranes!

I love hearing this story and imagining that someday I might live where the cranes fly over.

At home in the UK, alerted by sound, I sometimes run outside to scan the sky. There it is the sound of a Merlin engine and the silhouette of a Spitfire. This mid-morning rivals appeared as other groups of Cranes repeated yesterday's thermal hitching technique before heading off north. Marvellous: I now have another reason to run outside with childish (or is it more adult?)anticipation and delight.

Susan, Thank you for sharing that dear moment.

We saw the cranes today, too, flying over Pontlevoy. I stopped the car and took some pictures. I could hear their calls, and they were riding thermals up and over the land between Cher and Loire.

Walt: I've discovered that quite a few people who didn't grow up here think they are geese.

John: I'm glad to hear you saw them - they were right over your house today :-)

Ken: I'm glad you saw them too.

Paulita: it is remarkable how everyone looks forward to their arrival.

Jenny: they are lovely, so I am pleased to share.