Actually, if you are French, or a purist, you'd better stop reading here, because this post isn't really about rillettes de Tours, it's about making a reasonable facsimile from meat used to make stock.

The pork for true rillettes is cooked very slowly in its own fat, making a rich sludge that surrounds the meat. You can read about proper rillettes de Tours in Martine's recent post on Wishing I Were in France.

Potted pork in aspic for lunch. 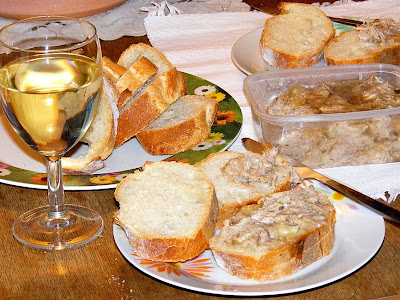 My version is a simple, cheaty recipe that makes tasty use of leftovers and cuts down the amount of fat dramatically. Rillettes from the supermarket are about 40% fat - that's a higher fat content than butter cream.

The other day I made a light, gelatinous stock from some pork shoulder. The stock was for a Ukrainian soup I wanted to make, but it called for cured pork in the soup, so I was left with a lump of moist, tender and still flavourful pork.

There's a lot of nonsense written about how all the goodness from the meat used to make stock transfers into the liquid, and the meat should be tossed after the stock is made. People are prepared to eat factory raised chicken, or tofu - they are just 'blotters' to take up what ever flavour you drench them in, and to provide bulk and texture. So why not use the meat from stock making in a similar way? Often it still has quite a bit of flavour in its own right too.

So, I put the traditional flavourings for rillettes de Tours in a saucepan – some sweetish white wine, a dash of red wine vinegar, some white pepper, garlic, salt, quartre épices and thyme – and allowed it to reduce until syrupy. I shredded the pork, added a ladleful of the jellied stock and the wine and flavourings syrup, mixed thoroughly and packed it into two plastic boxes. I left it to 'cure' for a couple of days so the flavours would balance and develop, then I froze one and we had some of the other for lunch yesterday. It looks more gelatinous and less fatty than the real thing, but the texture and flavour are both very acceptable.

Since I posted this, Ken, over on Living the Life in Saint-Aignan, has written one of his knowledgeable pieces on rillettes, including a recipe for doing them properly. Click the link to read it.
Posted by Susan at 09:00

Wow, Although I love rilettes, I would never take the trouble of making them myself. Congratulations, you did a great job, and I bet they were very good too!

this is what i think jane grigson, in her very french Good Things, calls brawn. also similar method for jambon persille. yum!

Ken: You are quite right. I've just checked the block of butter in my fridge and it's 80%. I must have been thinking of cream! Of the rillettes pots I have, one is from our local charcutier, and doesn't specify a fat content, one is U and has 42% lipides, of which 16.9% are saturated fats and the third is Onno, also with 42% lipides (which presumably for all practical purposes, means fats).