Bastille Day is on Tuesday.

This gives the French (M. Chaboisson the menuisier included) the opportunity to "faire le pont" and take Monday off work as well, creating a four day holiday. This makes a lot of sense, because Bastille Day itself seems to be used for recovering from Bastille eve, which is the traditional day for public Bastille Day events. On Monday we have our annual "retraite au flambeaux", a re-enacting of the mob descending on the Bastille with flaming torches, followed by fireworks and a dance that lasts well into the morning. Last year on Bastille Day Preuilly was the quietest I have ever known it. This is quite an achievement. 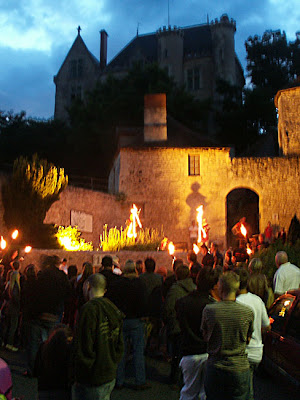 The storming of the Bastille is quite interesting: when it was stormed in 1789 there were only 7 people in the prison: four forgers, two lunatics and one deviant aristocrat (the Comte de Solages). The Marquis de Sade had been a prisoner in the Bastille but had been transferred out ten days earlier, and the prison was in the process of being closed.

Of course, in reality the day isn't called Bastille Day. Officially it is the Fête Nationale, a name which arose from the debate about when France's national day should be. One hundred years after the events of 1789 (do the sums yourself) there was a series of debates in the Senate, where the proposal for 14 July to be the national day edged out the 4th August, the end of feudalism on the date in 1789. There was even a debate as to whether it should be the 14 July 1789 storming of the Bastille or the 14 July 1790 Fête de la Fédération (a celebration of the start of the constitutional monarchy of Louis 16th which at the time was considered the end of the revolution) which should be celebrated. 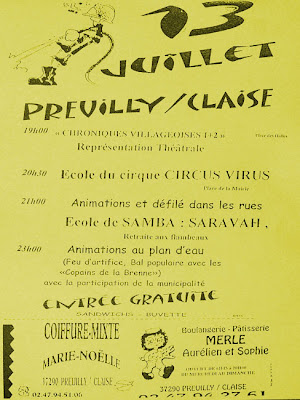 Either way - we will be walking the streets of Preuilly (behind a samba band, of course...), symbolically storming the Chateau du Lion, before dancing le rock and roll way into the night.

Email ThisBlogThis!Share to TwitterShare to FacebookShare to Pinterest
Labels: Events, Pictures of Chateaux, Pictures of Preuilly

Thanks for all that history! We have the same program here in Les Bordes.
Bonne Fête and don't eat too many merguez.

All I can say that all over France and other countries they are having fantastic celebrations..and as you come from the UK, need I say no more!!