Tomettes are traditionally laid either directly on the soil or on a dry sandy lime mortar, allowing them to 'breath' ie to absorb and release moisture just like the soft tuffeau stone walls should in these old Tourangelle houses. No grout is used. Instead, the tiles are laid butted up so that they touch one another and the homeowner relied on the dirt underneath and the soil on peoples' boots to fill the fine joints over time. The little room at the end of our entrance hall has tomettes laid in just this way.

When choosing our tomettes we decided to opt for new tiles because we were using them in a kitchen, with all its potential for wear and tear and staining. Old tiles can be purchased from reclamation and salvage companies, but they are more fragile and porous, being prone to delaminating and drawing liquids in through hairline cracks. They can also be very uneven in thickness and have disconcerting bows and waves. After much agonising over whether we should lift the existing floor, install a damp proof membrane and / or lay the tomettes on traditional lime mortar, we decided to lay them on the existing cement tile floor, using a modern mortar. Rather than get a jackhammer in and rip the existing floor out, we felt that it presented a stable and well laid and most importantly, level, substrate to bed our new tiles onto. Goodness only knows what we might have found under the existing tiles.

There was also considerable agonising over exactly how we should lay them in terms of where to start and what pattern to adopt. It took us all morning to decide, then we went to lunch at the Regional Trompes de Chasse selection event that was being held at the Plan d'Eau, without laying a single tile. After our return home, we managed to lay the tiles at a rate of about 1m² per hour. In hindsight, we think we may have made both the wrong decision about which tile to lay first, and have positioned the first tile we did lay incorrectly so that executing what we had decided became impossible. Hopefully no one but us will ever notice.

Note the seriousness of this enterprise – as indicated
by the wearing of an AGI2006 Information Team T-shirt. 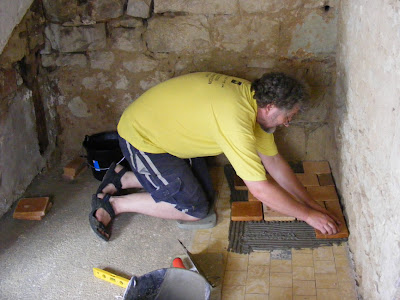 Pierre-Yves and Sylvie had mortar powder (or colle) left over from their tomettes and offered it to us. It only has a lifespan in the bag of 12 months, as it eventually absorbs moisture and sets. The instructions on bags of mortar are aways rather vague seeming, with suggested ratios of water to powder that have an enormous range. In the end, we mixed successive batches of what seemed to be a practical amount at a time (about a third of a bucketful) into a stiffish paste with the drill operated whisk. The mortar was stiff enough that it would hold its own shape (think beating eggwhites). I was surprised how little water was needed – not much more than a litre per batch. The man at Terres Cuites de la Lorne had advised us to dip the tiles in water before we laid them. This is to stop the extremely porous tiles sucking all the water out of the mortar and turning it back into a useless powder. Then we were to use plusieurs de colle (plenty of 'glue'), and to set them a minimum of 4mm apart. We bought a special trowel with 10mm teeth which is used to comb the mortar out and ensure an even depth. 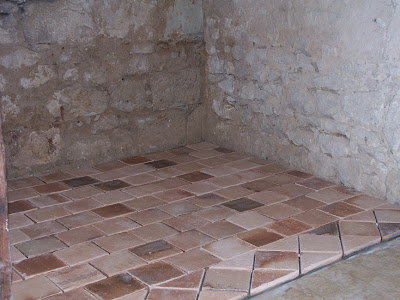 At the time of writing this, the tomettes have been down for 28 hours. They all appear to have stuck and be firm. None have become stained by absorbing the dark grey mortar. We did have one rogue tile that took far longer to set than the others. This was a bit mysterious, but we think it may have been sitting on a film of water, which was squeezed out eventually by persistent concerned prodding.

Word verification is telve, the W fell through the cracks!

Nice job! You are courageous.

Very nice job! Do you grout them?

(by the way, this is Walt, using Ken's account because he's signed in on the laptop. Don't ask.)

CHM: Thanks -the tomettes look pretty good too :)

Dedene - We were feeling uncomfortably courageous

Walt II. Stiing on the verandah and surfing? Grouting epic is coming up...

Did Simon use a tile cutter for his diamond-shaped design?

The tomettes do look beautiful. Looks like they need grout, don't they? Seems like modern vacuum cleaners would have made that old "sand in the interstices" practice obsolete. I had tomettes in my apartment in Paris back in the 1970 & '80s and they were definitely grouted.

OOOOh! AAAHHH! Those look great. My husband and I laid the tiles throughout our home and I loved the whole mixing, spreading the mastic, laying the tile and tile cutting process. It is definitely a job, once done, that gives you a feeling of great satisfaction.

Hi, We have tomettes in our house in the Loire but are struggling to get a nice finish. What is the best product for cleaning that leaves a nice finish for a busy floor. Look forward to any tips. Kate

We didn't apply a varnish to ours, but used hydrofuge as a water and oil repellant. http://daysontheclaise.blogspot.com/2009/07/finishing-tomettes.html