Tomettes are terracotta (in french terre cuite) floor tiles. They come in a variety of sizes and shapes, dependent on location; the traditional shape in Provence is hexagonal, but around here the standard is for square tiles about 20cm (8 inches) across for the ground floor, and 7 inches across for upstairs. At one time every large town had its own tomette (and roof tile) producer, with the result that every town had tiles of slightly different size and thickness. This can make repairing an old tomette floor very difficult - finding a match for your old tomettes can take a long time and you may have to be content with the next best thing.

We don't have that problem. The floor of what will one day once again be our kitchen is covered in fairly modern glazed tiles, but we have decided that tomettes would look a lot better and be more in keeping with the general age and appearance of the house. 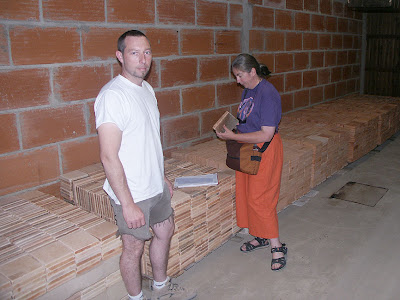 After talking to John and Jill and Pierre-Yves and Sylvie we decided to visit Terres Cuites de la Lorne, a traditional tile making concern about 40km away from Preuilly sur Claise just outside of Ruffec le Château in la Brenne. This factory is an accredited supplier of traditional artisanal terracotta floor and roof tiles and bricks for historic buildings. They make a range of less expensive machine made floor tiles as well as handmade carreaux vieillis and these square tomettes come in three sizes, priced at €45 per square metre for machine made and €61 per square metre for handmade (which is much the same price as for salvaged tomettes). The clay they are made from is sourced locally at Ruffec or Pouligny.

After much discussion - in hushed English between ourselves and in broken French with the staff from the factory - we decided to buy the old style handmade tiles. This was the most expensive option, but we felt that it would be more in keeping with the character of the house. We placed an order for 30 square metres of the 16cm (7 inches more or less) square tiles, with 4 metres to be collected within a week, and the rest to be delivered.

Empty tile boxes waiting to be loaded from the kiln 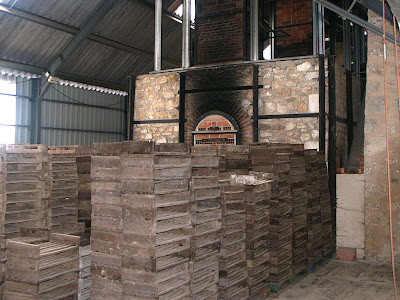 When we placed the order we asked for the 16cm tiles because the waiting time for the 20cm tiles is 6 months. Only later did it occur to us that as we will be laying the main body of tiles after the mason has been in April next year a six month wait wasn't the issue it might have been.

Roof tiles being stacked in the kiln 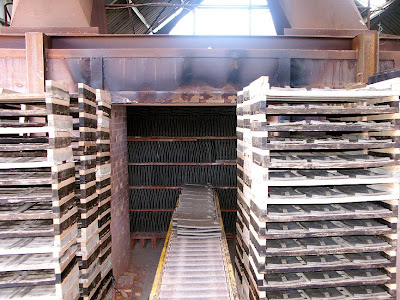 Last Thursday after visiting the decheterie we returned to la Lorne and picked up 4 metres of 16cm tiles for the area under the stairs and changed the rest of our order to 20cm tiles. The area under the stairs has to be laid before the staircase goes in, and we decided that if we are slightly creative with laying the smaller tiles the change in size will be a bit of a decorative feature rather than a sign of not being able to make up our minds... 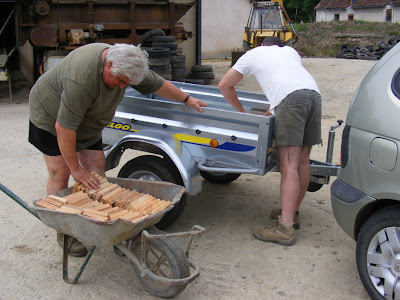 The factory is really interesting: big lumps of machinery and huge ovens, stacks of tiles waiting to be fired, tiles in between firings, and tiles baked and waiting to be sold. It would be great to visit there when production is underway, but the first time we visited they were stacking the kiln with roof tiles, and the second time they had just finished a firing and were letting the oven cool.

The unbaked tiles are grey, but after firing the colours
range from soft pale peachy pink to brick red and brown. 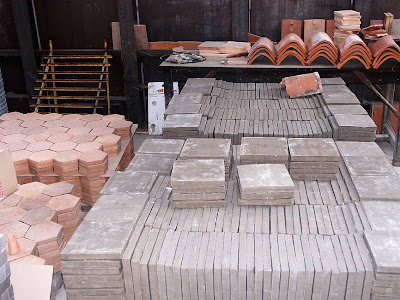 Email ThisBlogThis!Share to TwitterShare to FacebookShare to Pinterest
Labels: Our house in Preuilly, the Brenne

Fascinating. We must go and have a look.

Très intéressant. Makes me wish we had some in our house!