Work Starts on the Staircase

We were planning to visit M.Chaboisson's workshop on Wednesday to view work starting on our staircase. Imagine our surprise, then, when M.Chaboisson arrived at our door on Wednesday morning with his plans, tape measures, and digital angle measuring device.

He explained that he had drawn up the plans, looked at how misshapen the space for the staircase appeared and thought "surely not!?", so he was returning to check the angles again. After comparing the reading from his angle measurer against the plans he was delighted to announce that the original measurements were right after all, and said he would be starting Thursday. 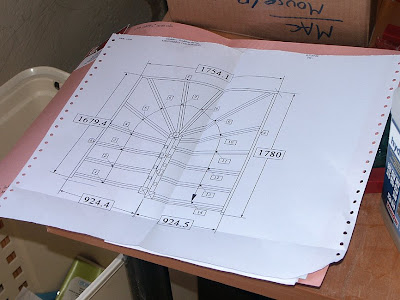 We were therefore somewhat bemused when M.Chaboisson arrived yesterday morning, tape measure and spirit levels in hand, together with the plans for the second flight of stairs. After checking again (which meant climbing the scary rotted away 2nd flight of the old staircase which is still in place) he came down and said his measurement for that level were good too, and work would commence "this afternoon".

All these return visits "just to check" would normally have made us quite nervous except for the fact we have seen his staircases in other houses and have been really impressed by them.

So at 4 o'clock we went up to the workshop. The receptionist was concerned that as work had started just that minute we would be disappointed and did we really want to look, but after assuring her that we wanted to see everything she showed us into the workshop. 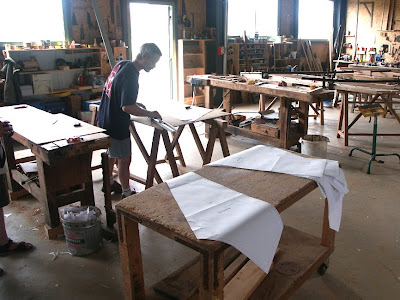 Although there wasn't much to see, it was exciting to see the full sized paper patterns for the treads being transferred to hardboard, prior to being put on the cutting machine. We assume the pieces for the staircase are made on something like a huge key cutter's jig, where one side follows the hardboard pattern, while the other side cuts the "exotic" wood to size. We still don't know what exotic wood we are getting, but it arrives at the workshop later today and we will be able to read what it says on the delivery note.

Our next visit to the workshop is on Monday. I can't wait!

It rained last night - after a fashion. At about 7.00 it started thundering, so we went out and sat under the eaves in the courtyard and watched huge drops of rain evaporating as they hit the cobbles. It was about 5 minutes before any water started coming out of the downpipes (it really was that hot yesterday afternoon) and then it stopped. There was about 10 little hailstones in there as well, which had us worried for our peaches and nectarines, but they stopped too.

There was rumblings and gusty winds at midnight (along with more lightning and thunder) but I don't think there was a great deal of rain with it. At 8.30 this morning it started raining - nice and gently, which means we won't have to water the garden today (hooray!).

Mother nature taking her turn at the watering chore!
Watching something built from hand is amazing, isn't it? But you guys do it all the time.

Well it's about time Nature took her turn – she's been slacking for 6 weeks and we've got cracks over an inch wide in the ground.

It really makes you appreciate the skill involved in making things when you can visit the workshop.

This is all fascinating and we'll be following the staircase saga with interest. I hope that when it's installed the staircase doesn't hide your beautiful work with the tomettes.

Did you take plenty of "before" photos to show the contrast?

You don't want some of the rain I have been getting this month. We are having some landscaping work done on one side of our house, and since the soil is clay , we are dealing with mud and little pools of water. The remainder of the month looks bleak :(

I can imagine your excitement to see the beginings of this project . I think that it will be wonderful.

It makes me smile when you mention Mr Chaboisson's name... because D has this name in his family tree(a family who lived in Chaumussay but who had it's origins in Charnizay).

Have a nice evening.

Very exciting this new staircase thing, yet a bit scary too, I should think. At least you are on site to see what happens, unlike when we had our roof done. It turned out ok but we were nervous wrecks whilst it was happening. It's not an everyday occurrence this, having a new staircase. You must have great trust in the charpentier. Bon courage.

We, too, will be watching the staircase come together with great interest, as we have a staircase project in the plans as well.

And thank goodness for the rain! Now, where did that heat go?

that kind of wood working and artisanal atelier is one of th very best things about the french. i'd like to know every detail, including whether or not they're communists. (not joking, since this kind of very cultured and refined artisanal class has plenty of time to think about politics, labor, and you know, thingness. dialectical materialism kind of stuff. stuff.)