Yesterday morning we had our first appointment with our new accountant and business advisor, Dominique. He lives in Descartes and our meeting was held at the table in his charming courtyard. He was recommended to us by Alex and Nicole from Les Limornières. They thought he would be perfect for us, and indeed, he seems so. We showed him our business proposal and after quizzing us a bit, he was enthusiastic and sympathetic to our approach. His word of caution was that it will all succeed or fail on the success or failure of our website, as this will be our primary means of attracting clients. We now have to provide him with some personal documentation, design the website and come back to him to go through the business registration process.

When we arrived, his wife Annette greeted us and said Dominique was off washing the car, as they were going on a picnic this afternoon with a group of Spanish exchange students that they are involved in hosting. Turns out Annette and I already know one another, as we have met at the Trésorie Public, where she works and I have paid several bills. When we got up to leave, Annette called 'wait, wait!' through the window and ran out with a jar of confiture de cerises.

Visiting Descartes also gave us a chance to photograph the giant Kiwi that adorns one of the roundabouts in town. I have no idea why it is there, but it is skillfully constructed and very amusing. 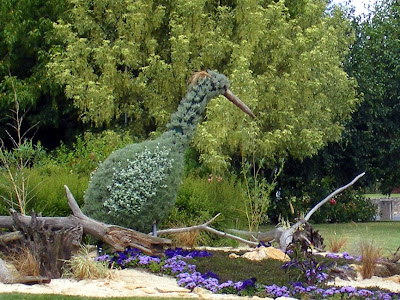 In the afternoon we went up to Sylvie and Pierre-Yves to pick up a bag of colle carrelage (tile glue). They have several bags left over after having their tomettes (terracotta tiles) laid, and we are just about to start laying ours. The glue goes off after a time, so they are happy to sell their excess to us at a bargain price. Then we had to go to Châtellerault to pick up grouting for the tiles (more on which later) and the tools needed for laying them.

Then we thought we would pay a quick visit to the chimneys at the old arms factory, but gave up on the endeavour after half an hour of going around in circles. The Pont Henri IV is partly closed and also the bridge downstream. Central Châtellerault along both sides of the River Vienne is a maze of narrow one way streets. We did eventually manage to cross the river, and we could see the chimneys, but just couldn't work out how to get to them.

Email ThisBlogThis!Share to TwitterShare to FacebookShare to Pinterest
Labels: Gardens and Parks, Towns and Villages near Preuilly

I've been lurking on your site for ages while researching our upcoming (sept)visit to the Loire area - a first for us. There's been a mention on the Trip Advisor site that you give tours of the area. Is it true? I wondered if your mention of your business plan had something to do with this. We'll be staying in Pouille and have only 4 full days. We'll probably manage on our own but it is lovely to read an insider's daily events and discoveries.
My real purpose for writing is to satisfy my mania for wanting to give things names. Do you know the name of the wild flower which often grows on old stone stairs or walls and looks like a small pink and white daisy. The effect is lovely fluff to soften the old stones. They're about 6-8 inches tall, I'd guess.
If you have a minute I'd love to know. Thank you.
Jocelyn Wade
ajwade@telus.net

Jocelyn: We are planning to offer private tours. I think your wildflower on the walls is probably White Stonecrop. I've PM'd you with more details.