Barrou is a pretty little village on the banks of the Creuse river just north of la Roche Posay and about 15 km from Preuilly sur Claise.

On Saturday night the village held their 5th annual festival, which is a concert that lasts the whole evening. We were working so we didn't get to Barrou until about 9.15, which meant we were too late to see Angata (percudanses Africaines) and Music Instainct (pop rock). We did arrive just in time to see Kass Muzet, a chanson troupe (assuming three people can be a troupe). Explaining what they did would be a bit complicated, so here is a taster
What amazed us is how bawdy - indeed graphic - chanson can be and still be acceptable for an audience of mixed ages. Huge fun, with audience participation and involvement galore. Even with my limited French the action is so entertaining they were worth the 5€ entry fee all on their own.

The second act we saw was Henrik Freischlader and his blues band. Not a name I am familiar with, but they had a good sound and were well mixed*. Susan says they sounded like music, not a load of distortion.

Henrik going for it... 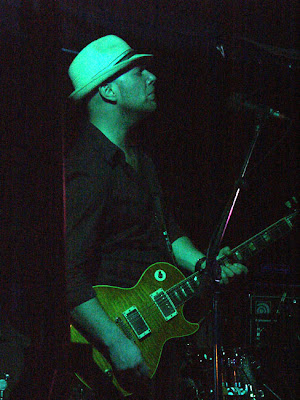 It is a really attractive venue - the river bank is terraced, albeit very steeply, leaving no room for a moshpit/dance floor for the weirdo hippy dancing (there's always one). Susan had some difficulty with the steepness of the terracing, having decided to wear her smart going out sandals instead of action sandals. I sat (because the banks were so steep it was more like lying) in front of the stage while Susan watched from the circle seats.

Afterward we think they had fireworks (we had such a busy day on Saturday we left early) because when we arrived home we could hear explosions and see a glow in the sky.

All in all, a really good evening, thoroughly recommended if you're in the area next year - or if any of the acts are playing near you.

And then yesterday - while we were watering the vegetables - it rained. Not enough to water anything, but enough to show a rainbow. 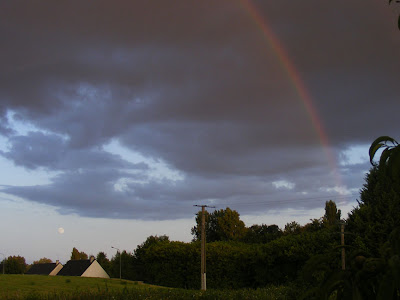 The rainbow was a sign of better things to come, because it is raining properly this morning. We have had about 30 minutes of light but constant rain, which is enough to make the gutters flow, but not enough to wash anything away. We need about another hour of the same, then I will allow it to clear up but not get hot and humid.


*techie term, dunno what it is in civilianese.
Posted by Simon at 09:00

That sounds cool ! I'm sure that you both had a smashing time.
I loved the rainbow in the end. (I'm a pushover for pretty rainbows )

Barbara - we had a great time.

The reason I took that last photo is because I dont think I have ever seen one over the moon before!