When be bought our house we were intruiged by what "The Concrete Thing" at the back could be. In September 2007 we discovered the manhole cover was over the well, but why the "Thing" extended so far and what its purpose was? No idea!

In May last year I made an attempt to break it up, but the tools I had weren't up to the job - even my Electric Destroyer wasn't big enough. Alex has a much bigger Electric Destroyer so we asked him to come over and apply some pressure to the Thing as part of our larger plans for the garden.

Alex at work with the big Electric Destroyer 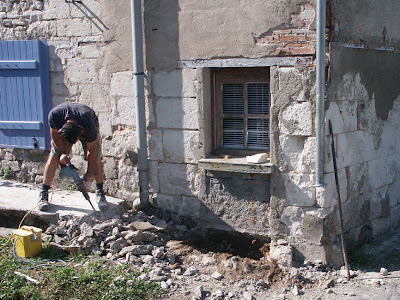 On Thursday he arrived with a full selection of gear, and even though it was a very hot day, by lunchtime most of the Thing was gone. In the process we discovered the steps down to our back door, which has been converted - quite badly - into a window, and may one day once again be a door if I can figure how the angles will work.

After a very nice (90 minutes long, naturally) lunch we took the spoil to the decheterie, tidied up and the job was done. We have left the gully in place to take the rainwater from our downpipe away from the walls, but it appears the whole of the Thing was put in just for that purpose. We have also left that part of the thing that surrounds the well. In the fullness of time it will be removed, but it will have to be done carefully so that bits of old concrete don't fall into the well.

Eventually we will have a "French drain" that runs along the wall to take the water away, and a pipe that attaches to the drainpipe and runs under the garden to emerge at the street. We had wanted to run the rainwater off the roof and into the well, but that isn't allowed (one assumes either to keep the "source" pure, or simply so that when it rains the town's gutters get flushed).

The Thing is gone - but the drain remains 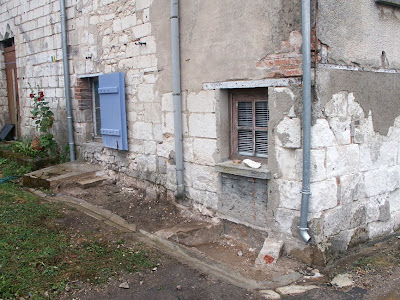 We are no closer to understanding quite why the Thing was built in the first place. It was done in two stages, at first just a thin layer of concrete over old stone, but sometime quite recently (within the past 20 years is my guess) it was built up until it dominated the back of the house. You can see that even yesterday the drain worked quite well on its own, and it really did rain quite heavily at times.