The Heat Goes On*

I know, as someone who lived through a couple of 7 year droughts, that about 3 weeks without rain isn't a record breaker. What one has to remember though, is that in France - especially this part of France - a drop of rain is never that far away. It seems unreal that at the beginning of the cherry crop we were worrying about the rain spoiling our cherries, and here we are - cherries still on trees, worrying about heat stress.

It's been hot, too - as Susan said, the thermometer in the car was reading well over 40 the other day. That's 104 in the old money. Far too hot to be doing stuff, but it doesn't seem to have stopped us completely. This week we have been shifting render off walls, taking the rubble to the dechetterie, measuring floors for tiles, remeasuring, using formulae for calculating floor space (Heron of Alexandria anyone?), buying tiles.

10.00 at night and Susan is watering the veggies 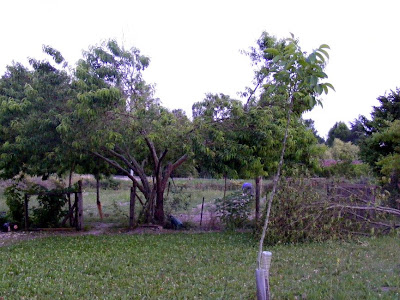 And watering the garden.

We have carried so much water. It's because of the drought, you know - and I think that's where came in....

MétéoFrance says there's a chance of showers today, tomorrow, and Monday, with a chance of real rain on Wednesday. Maybe I'll schedule a barbecue for Weds. just to be sure.

We're planning to go to the Barrou music festival this evening. Maybe it will be Glasto mire and we'll need our wellies*

We know someone who went to Glasto in the past week.

That doesn't mean we actually know what it is... Oh, Glastonbury. Festivals.