It was 41°C in our front courtyard yesterday at about 3pm. The day before we went to the menuiserie (joinery) to pay the deposit on our new staircase and thought how lovely and cool the secretary's office was. She showed us the thermometer and it was reading 29°C! These things are clearly relative.

A European Wall Lizard Podarcis muralis
(Lézard des murailles) on a mossy tree root.
Even the lizards were seeking the shade. 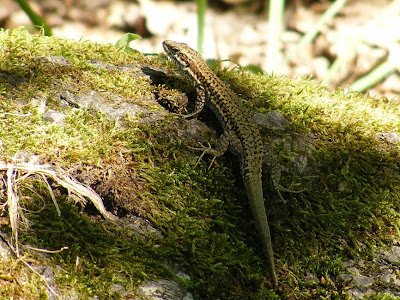 The Fôret de Preuilly, with its promise of heavy shade from chêne et chataignier (oak and chestnut), is a popular spot in this hot weather, as we discovered when we visited a couple of days ago (see yesterday's picture). A class from the Ecole Maternelle (to judge by the ages of the kids) was there, probably having been building shelters in the woods from fallen branches and bracken, and now reappearing with teachers and parents, to exclaim at the grosse grenouille (big fat frog) in the étang and shout 'vive la France' in unison for the photo call. 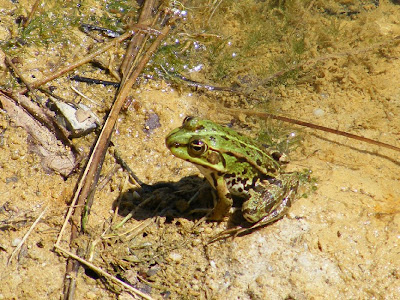 There were at least half a dozen other cars in the car park. People came and went after having a snack in the shade and a short walk. We just walked around the étang de Ribaloche, at the car park, but since it was swarming with dragonflies of about 8 different species, it took us quite a long time to get round, photographing obliging specimens along the way.

A sizeable carp, cruising through the water weed
in the shallow étang. 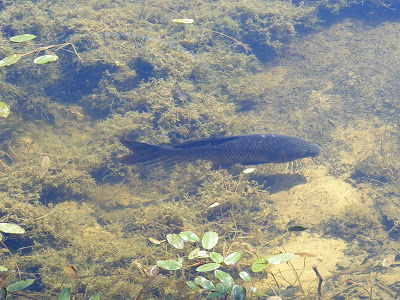 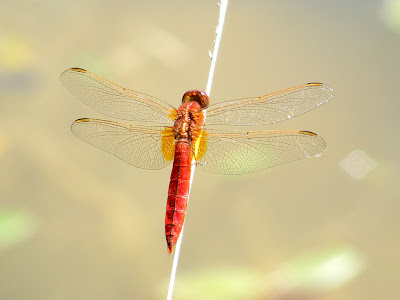 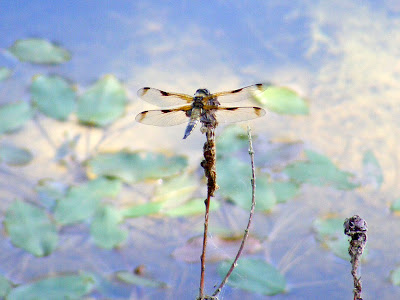 Beautiful pictures. You have a lot of patience.

Patience eh... I will try to remember that when doing bricolage!

I do like the Monet quality of the bottom photo though