The Welcome Return of Wet Stuff

This allowed us to traipse off and do other stuff besides watering the jardin (see yesterday's post) and has made a major difference to the way our crops have developed. No matter how much you water, 10 minutes of rain is always more effective. And easier, if you're having to cart water up from a stream.

I was bemoaning the fact the other day that even though I sowed a second batch of beetroot, chard and carrots in the garden, nothing had happened. At the same time I had put some seeds into pots, and most of them had sprouted within days.

Well - now we are all lined up for a glut of beet, because a week after the plants in pots germinated the seeds in the garden have sprouted - every single one of them. Even allowing for losses we are lined up for hundreds of beetroot and chard plants. But still no carrots (although I am semi expecting that today when we check the jardin they too will have come through).

Special Forces gardening with the spade
Martine and Christian gave us 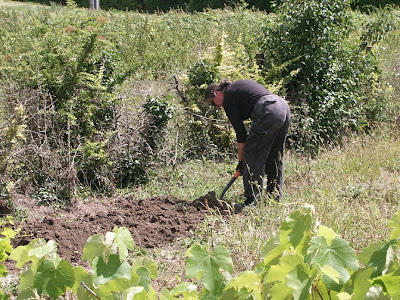 The other difference the rain makes is to how much easier digging the garden becomes. Susan was creating a plot for saffron bulbs, and achieved in 10 minutes what last week would have taken her an hour (at least, she says). I was preparing a bed for the veggies I planted in pots, something I gave up as far too hard last week but managed with some style in about 5 minutes this week.

The rain has also made a major difference to the orchard, too. Large cracks in the ground had been opening up around the trees, the kind of thing I thought we had left behind us when we left Queensland and perpetual drought, so it was rather nice to see the cracks closing and the return of the rain.

We also had the orchard mowed just before (and during the start of) the rain. We have decided not to buy a ride on mower, but to pay Alex to mow for us. It only takes a couple of hours 3 times a year on a lawn tractor, but buying a mower capable of doing the job (and capable of keeping on doing the job for year after year) would be uneconomical. 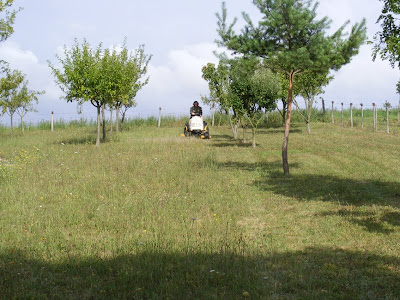 This is sort of a disappointment to me. I was looking forwards to have my own tractor and playing at famers, but with only half an acre to mow it doesn't make sense. We will be buying a push mower though, so that will be a chance for me to find out if mowing lawns really is the hateful, hot and hard work I remember it being from my childhood.

We have our lawn at home mowed by the man who lives two doors down. He's done it since 1985. It's great to come home and find it's been done, but Nick secretly yearns for a ride-on mower. Must be a man thing.

I'm really glad the beets and other plants have popped up. You can never have too much beetroot, from my point of view.

Get a tondeuse tractée if you buy one. You don't have to push it. It's self-propelled. You just have to follow it around, and of course help it turn corners.

Jean. I had a ride-on in Australia, but that was a proper sized block!

Ken. I was right about the carrots, too. I went down to weed the beans and notice rown of teeny carot shoots. A tondeuse tractée is a good idea - the more expensive option, but I should be getting used to spening money by now.

Why is Susan doing all the digging? I don't remember saying anything about the spade being a 'female' version ... :)) Martine

I like my tondeuse tractée. A ride-on mower would be nice, but in our yard there are just too many obstacles to make it practical.