To Pick up on an Earlier Theme...

At last we have something that quite definitely is starting to look like the beginnings of a staircase!!

Our old staircase was démonté in 2 hours yesterday morning, which is quicker than I would have done it myself (and a lot more scientific - I just know that if I had demolished the second flight a good proportion of the house would have to have been rebuilt). We have kept the old banister and stringer arrangement as a souvenir and future house decoration because it felt plain wrong to destroy such a lovely old thing (oops - am I not appearing totally practical here?). It is made of oak rather than exotique, and it was trop triste to think of it being burnt as firewood. 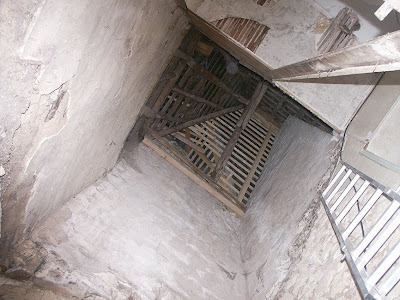 By lunchtime the stringers were (more or less) in place; trying to put something new and straight into something old that isn't straight takes a lot of adjustment and thought. 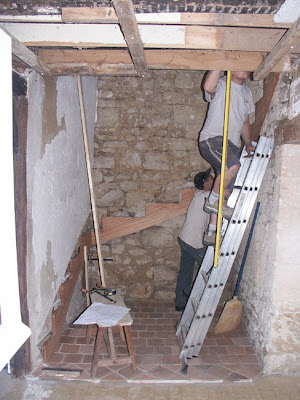 The adjustments and thought that went into putting the stringers in place was as nothing compared to the effort, thought, shifting of positions (both physically and mentally) and finagling involved in getting the noyau in the right place - and then the ever more involved process of making the marches and contremarches fit. Part of the problem is that the landing isn't level so a decision has to be made as to where the stairs actually arrive to. We have decided they should arrive at the highest point, and that at some stage in the future we will lift the floorboards and insert shims to make it level. Or something - maybe "levelish" would be a more realistic aim!

The staircase builders were here until gone 6.00pm, and the team of 3 was supplemented during the afternoon by the boss (M.Chaboisson) and by Jean-Louis (who gave the impression of having stopped by on his way home from work). 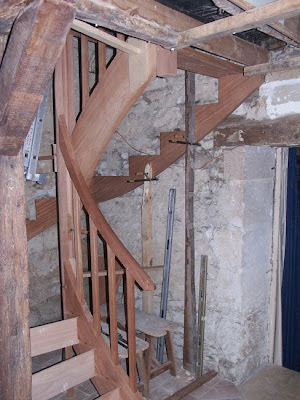 So this is where things stood at the end of play yesterday. We were assured that they have broken the back of it and things should go smoother and faster today, which so far (they arrived at 8.00) appears to be the case. Apparently no-one had told them (until Jean-Louis arrived) that all the steps were 50mm longer than necessary so that they could be cut in-situ to fit the vagaries of our walls.

Sitting around while experts push bits of wood around and look slightly concerned is a stressful thing. I kept on getting worried that things weren't going right and everything was going to be an issue and we weren't going to be getting a staircase after all. Luckily, Henri Proust arrived bearing a bottle of Thierry Landry (Chinon) red and distracted us just enough to make it all ok again.

Soon we should have a staircase - until then we have a beautiful piece of abstract (or maybe impressionist, on the grounds that it gives the impression of being a staircase) art.

Can't believe that, finally, you're going to have a staircase. Can't wait for tomorrow's blog!

Thank you for the update. Awaiting "patiently" to see pics of the final product . The handrail looks very very nice btw.

Wow, that's looking really spiffy. Looking forward to see the end result tomorrow. Will you be building a party to celebrate the new staircase? Martine

Thirty-three steps, didn't you say? That's quite a staircase. I counted the steps we have to climb to get up to our kitchen and living room, and there are only 13 of them! Minable ! Pitiful! Can't wait to see your stairs finished.

Ken: nope, we're actually 11 short of the full John Buchan, but that is up to the attic. There are 14 steps to the bathroom.