Over the last couple of weeks the blog hasn't exactly been receiving our full attention, which will not come as a surprise to anyone who has restored a house or who owns a large garden/orchard. There is a reason - apart from the staircase - for the lack of variety in our blog posts though, and that is Simon's Secret Project.

Regular readers will know I occasionally look at cars: old Renaults, Citroens and sometimes more exotic fare. I am not the most mechanically minded of blokes so I admire them as much for form as function - something I suspect even the most hardened engineer does. Of course, we all laugh at 2CVs (well - we do if we have any sense of humour), and we all ooh and ahh when we see a vintage Bentley, Hispano Suiza or Bugatti. Some of us are even attracted to some modern cars; the Aston Martin DB9 manages to quicken my pulse, and a Maserati Quattroporte is a thing of beauty.

There is one car, however, that appeals to me on a completely different level. It isn't the most luxurious of cars (although it's not bad on that front) nor the most advanced (although it its day it was revolutionary). Nor is it the prettiest (even though is it attractive) or rarest (over 3/4 of a million were built over a period of more than 20 years).

Last Week we have drove over 1000km* to look at Citroen Traction Avants. We have seen some really nice ones but none have been THE car for me. Last Tuesday we drove a pretty black one, but I wasn't convinced by the way the doors fitted. We saw a very nice example on Friday, but it isn't black, it's grey (most post war French Traction Avants were black, but they were made in grey and blue for the Algerian export market) and I want black: baddies and spies drive black Traction Avants.

The showroom it was in is magnificent:

A row of Tractions 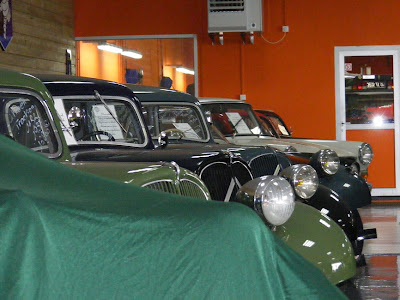 A TR3, Model A Ford and a smatterings of Goddesses 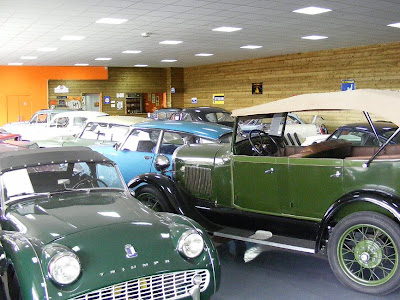 So if anyone has a Citroen Traction 11B, left hand drive, black, in good condition with normal French registration (Carte Grise Normale), drop me a line. Post war malle plate preferably, but a big boot model wouldn't be a problem. (For those not in the know, the difference is shown here).

Simon, I'm sure you will find your dream car eventually. And you will have great fun looking for it.

Jean. I'm torn - one one hand visiting these places is great fun and I get to see a lot of rare and desireable cars so it os no hardship. On the other hand, I want my car NOW! :¬)

...that is one sexy piece of metal. The best of luck!

My Dad had a "light 15" in black which really looked the part. As an engineer, I admire the innovations that Citroen packed into this design, inlcuding one of the first monocoque chassis, and the independent torsion bar suspension.
You realise, of course, that old cars take more of your time and money than old houses!
Good luck with your search!