We called in on M. Chaboisson yesterday afternoon to check progress. After handshakes all round Jean-Louis showed us the stringers, which have now been routed to take the steps (marchés)* and risers (contra-marchés)*, and pointed out that the apprentice was cutting the handrail blanks. All of our steps have been shaped, (with a natty litle curve and rebate on the underside) which we would have taken photos of except the batteries in the camera went dead. 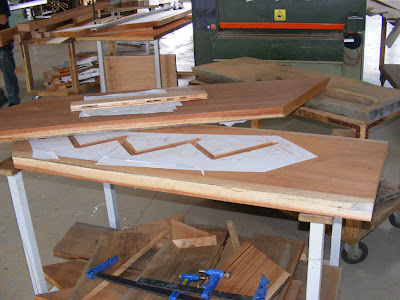 M. Chaboisson has an informal little museum in his atelier, including old doors he has made replacements for, and a collection of old tools. He also made a replica cell for the donjon in Loches, pictures of which are here and here. 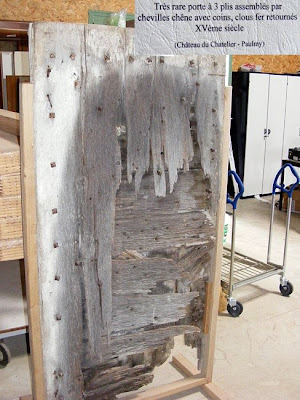 p.s. Someone we know is having bacon and eggs for breakfast today.

*See Ken's comments below: Marches and contre-marches
Posted by Simon at 09:00

Bon appétit to the someone you and I know!

Is this a coincidence or did this someone read my blog this morning ;))? Hope he or she enjoyed it! Martine

We visited our cabinet maker while our shelves and cabinets were being made and I remember loving the sawdust on the floors and the smell of the cut wood. Your stairs look great already. By the way how is the weather?

Are you round there every day to check progress and take photos ? I would be. So exciting and a once in a lifetime thing to get your own staircase custom made. Fairytale castle stuff.

Martine. More of a tradition than coincidence.

Jenny and Jean - we're haunting them, but they appear plrased to be haunted. I can only assume that some people just don't show interest.

I think you mean marches (treads or steps), not marchés (markets). And contremarches (risers). Watch those accents. They'll trip you up every time.

....and I was SO proud of myself for remembering that some words have accents...