Because of the way they are laid, tomettes are traditionally not sealed, as this would prevent them 'breathing'. More recently, it has become normal to 'traditionally' seal tomettes using a mixture of linseed oil and white spirit, but I was reluctant to do this, as the experience of the heritage conservation organisation I used to work for found that linseed oil used on wood actually attracts moisture and dirt, which then forms an almost indestructible layer of surface and impregnated gunge.

However, we did feel that it was impractical to use the tiles in a kitchen and not protect them from the likes of drops of oil and red wine spills. On the advice from the tile factory, we have impregnated the tiles with a product called Sarpasol, applied before grouting, which claims to protect against dirt and efflorescence (salts carried by moisture moving through porous material and crystalising out as a bloom on the surface).

The sole ingredient of Sarpasol is listed as 'naphta lourd hydrotraité', which I assume is the substance known in English as 'heavy naphtha'. This is a petro-chemical and an acid, which is presumably the secret of how it works. It must neutralise salts as they emerge. It is a thin colourless liquid, lightly and pleasantly scented, with a slight oiliness to the touch. I brushed it on the tiles, making sure to get the sides as well as the tops, as advised by the factory. The tiles sucked the first coat in within a couple of hours and I gave them a second coat, which they absorbed nearly as quickly. The man at the factory recommended we give them three coats if possible, but because time is short, we gave them two coats before grouting. Each coat used about a quarter litre of Sarpasol for 3m² of tiles. It changes the colour of the tiles slightly, making them darker and brighter. It was interesting to see how some tiles absorbed the substance almost instantly, whilst others must be less porous and took longer to draw it in.

Applying Sarpasol with a brush 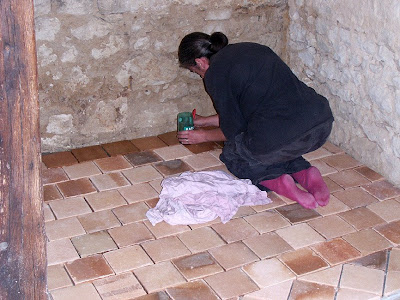 The next day we prepared to grout. I had discussed with Pierre-Yves what they had used (chaux blanche and fine sable rouge) and we were planning to do the same, but when we got to the hardware shop to buy the materials, were dazzled and confused by the selection on offer and had a bit of a crisis of confidence about using such basic materials. It didn't help that hydrolic lime (chaux) has a reputation in the UK for being difficult and dangerous. I had used it in a workshop some years ago at Cliveden Conservation, but Simon never had, and felt we would be better using a proprietary mix. Eventually we found something he was happy with and chose a colourant we hoped would give us the soft pinky beige that Pierre-Yves has achieved. 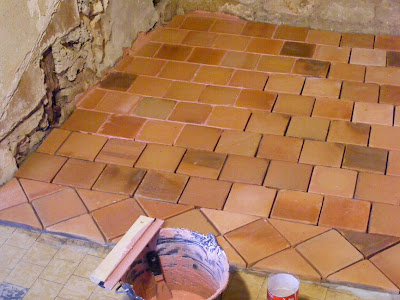 The proprietary mix turned out to be not what Simon expected and not at all the right look for our tomettes. We spread some on the tomettes at the back that will be hidden under the staircase (and winerack). The more we looked at it, the more unhappy we became about using it. The colour was too strong, the texture was all wrong. This was turning into a Barbie Pink mistake of the same order as the fuchsia doorblock. Finally I scraped as much as I could out of the joints and we went over to consult with Pierre-Yves again. Simon checked the exact wording on Pierre-Yves' bags of chaux and off we went to the suppliers. Pierre-Yves had got his sand from Dallay in Yzeures, but what we hadn't realised was that they only sell en vrac (in bulk) and we didn't have a container or the trailer with us. We had to resort to Bricomarché instead, who we knew did not have the red sand. The less exciting grey-brown sand would have to do. This is labelled sable pour enduit 0/2, meaning 'sand for render 0 - 2 mm diameter grains'.

Mixing the chaux blanche and sand 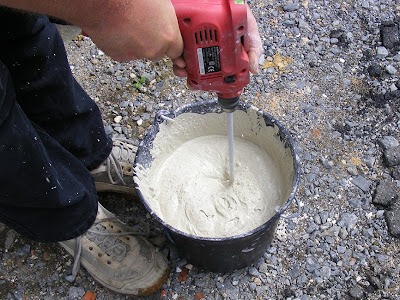 Back home we mixed it up by eye to get a good pouring consistency, and were immediately reassured that it looked right. We poured it out and spread it with an ordinary tile squeegee (raclette), working it carefully into all the joints. Lime mortar is not like modern grout. It is not smooth and plastic, but sloppy and gritty. The squeegee works, but because of all the sand, doesn't scrape it all off the tops of the tiles neatly. Once we had covered the whole area we left it five minutes and started working our way over the surface with a sponge to clean off the excess (of which there is a considerable amount!) We had to be fairly careful not to excavate any of the joints while the grout was still soft, but we feel the result is that the tiles look as we hoped they would.
Applying the grout 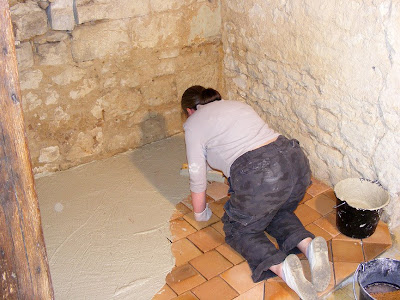 Once the grout had been in place 24 hours, Simon applied the third coat of Sarpasol. It took much longer to dry, possibly because the tiles had already absorbed the earlier coats, possibly because it was a much cooler day. Leaving the tiles another 24 hours, I then brushed the entire surface with a water and oil repellant provided by the factory. This is called Protecteur hydrofuge oléofuge (water and oil repellant). Its sole ingredient is fluorinated polymer, so it is like applying a layer of clear liquid Teflon. It's the sort of thing used as anti-grafitti treatments on walls, and can be removed with a dilute solution of sulphuric acid (which is what one is generally advised to clean tomettes with if they are extremely dirty or have excessive salt bloom.)

The grout is wiped off, but the tiles need cleaning 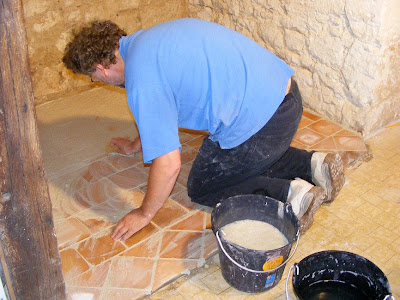 I'm a little bit ambivalent about applying modern materials to traditional tomettes, but since we compromised from the very start with the manner in which they were laid, we've lost any purist cred we might have. It is also a completely different ballgame using these materials in an occupied private domestic dwelling as opposed to an historic building open to the public. The risks and the level of wear and tear are in many instances quite different. Much of my ambivalence has to do with not being entirely sure how reversible these treatments are. Theoretically both treatments should simply break down or become neutralised by chemical reactions. Apparently you can tell when you need to reapply the surface protection by the fact that a lime bloom appears and drops of water no longer bead. 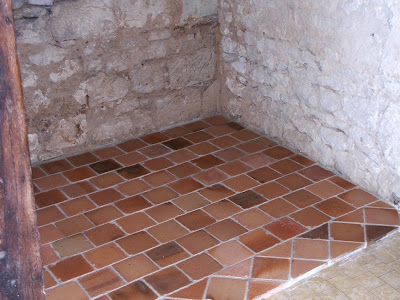 I moved from beautiful to ... SUPERB!

Susan, what's it with your "pinkish feet" :-) just kidding

A very nice result. Is this the process you've signed up for for the remainder of the kitchen floor?

word verif: cropete. Must mean something...

Thank you one and all (I was gfoing to do my Oscar acceptance speech here, but none of us have the time)

Walt - only another 28 metres to do - but that will after everything else is done.

oh guys, they look gorgeous. you give me courage to address the frighteningly hideous tile in the bathrooms of the rancho atomico.