We went up to M.Chaboisson's atelier yesterday morning because Susan and I had a misunderstanding. I thought M.Chaboisson had said the staircase would be finished by the end of July, Susan thought he had said he was off on holidays on the 25th.

When we arrived the Maitre himself was there, and he showed us the way work was progressing, and assured us his holidays start the end of July, but he wouldn't be going until he had finished our job. He than said we should return on Monday, when they will be pre-assembling the staircase in the workshop, with the plan of installing it in our house on Tuesday. Or Wednesday. Probably Wednesday, but maybe Tuesday. Probably on Tuesday they will take away the upper section of our old staircase and install on Wednesday. Unless they do both demolishing the old one and installing the new one on Tuesday.

Whichever way it goes, it looks like we will be able to climb stairs and use the upstairs rooms by the end of next week. 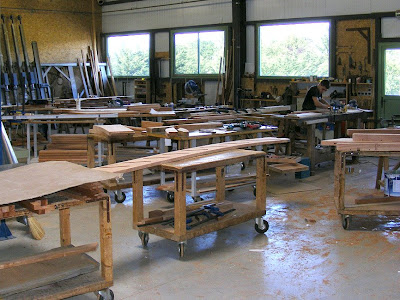 The workshop was really busy yesterday morning - lots of people working hard, lots of staircases waiting to be assembled, with one already having its balustrade attached to the stringer.

We are still excited

I wonder if you are going to give us an idea of how much such a custom-built staircase costs. Ignore my comment if you want to. Walt and I have a long-term plan to have a similar staircase put in at our house, once we decide to finish off the attic.

Ken: The devis is about €7000. The cost is the only reason we are not having it in oak, which would be traditional. The cost of an oak staircase of this size (33 steps in two flights) would have been about €12 000. We felt that it was a compromise we had to make, given our total available funds and the amount of work we have to cover.

Because the space for the staircase is so skewed, and because of the number of steps in each flight we had to have a custom job, not one from Leroy Merlin (which, incidentally, would not have been all that much cheaper).

Susan, thanks, don't mean to be indiscreet (well, not too indiscreet...). I assume that 7000€ figure is for the staircase completely installed? I'm not sure our staircase and the job would be at all comparable, of course, given how different our relatively contemporary house is from yours.

Ken: I would have PM'd you if I'd been bothered by telling the world :-) Simon and I discussed this when we first blogged about the staircase, and agreed that it was something we should be open about. So many people will not discuss money that when you first start a project like this you have very little idea what your budget needs to be. Mind you, any figure we put up will remain current for a couple of years at most.