Pistou, the French version of the Italian Pesto, is a Provençal dish, but here I have been playing around with the recipe to produce a tourangelle version with local ingredients.

Serve spread on les toasts (croutes or toasted slices of pain or baguette), topped with a slice of fresh goat cheese. 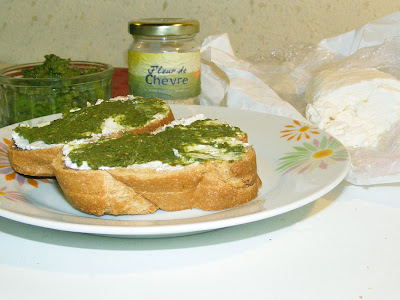 The quantity of garlic in the recipe varies to accommodate personal taste, but also because when the basil is at its peak in July, the new season garlic is too. Often sold as ail violet, it is strong to the point of being inedible if you overdo the quantity. (Fresh raw garlic induces nausea, so beware!)

Garlic, bought in Preuilly market from our orchard neighbour 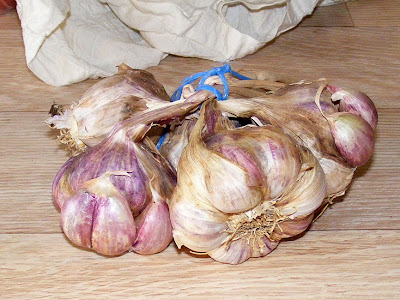 One of our local goat cheese producers makes a sort of grated Parmesan equivalent from finely crumbled very aged fromage de chèvre called fleur de chèvre. It's powerful stuff, and when I said to him I was going to substitute it for Parmesan in pesto, his advice was to use less than you would use of Parmesan. He's right.

Buying from the travelling laitière. 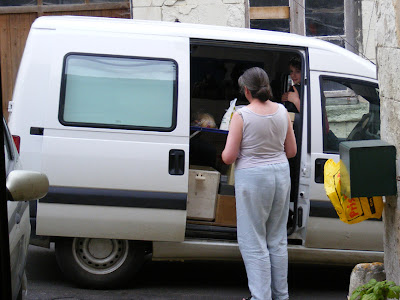 The other goat's cheese, a demi-buche de fromage frais (a half log of fresh cheese ie only a few days old, not aged) is made by a different producer. She calls at the house on Mondays and Fridays and I nearly always buy something.

Hazelnuts on the tree in our orchard, not ready to pick yet. 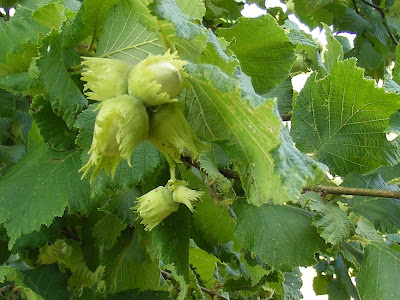 Hazelnuts in the oven, ready to be roasted in their shells. 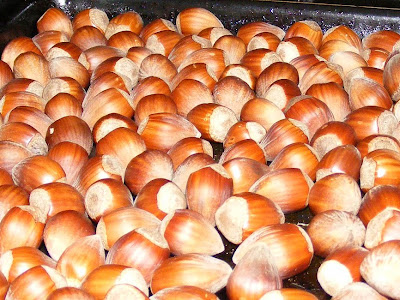 Walnuts and hazelnuts are widely grown in the Touraine, to the point that you do not need to buy them ever, you can just pick them up off the ground in parks and on roadsides. We have several trees of both growing in our orchard. They make a great substitute for pinenuts in pistou.

Shelling hazelnuts, using the multigrips
Christian and Martine gave us. 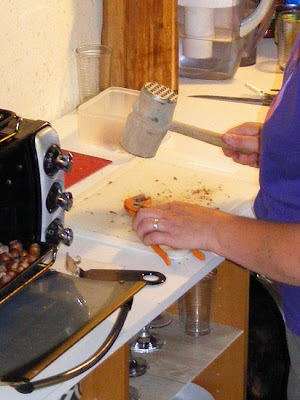 If you are in France and don't want to go to the bother of making your own pesto, then the best rapport qualité/prix (value for money) commercial pesto is Casino Délices pesto à la genovese 2.60€ (Casino is a French supermarket chain – both the mini-supermarkets in Preuilly are Casinos).

Hi Susan, What a tasteful and attractive alternative for the traditional parmesan pesto. I'm definitely going to try it, although I am not sure if we can get Fleurs de chèvre in Belgium. Next time I drop in at our gourmet market, which is about once a month, I'm going to ask for it. Martine

Martine: Just remind me next time you are in the Touraine and I'll get you a bottle.

In the past, when I've found very dry chèvre (and you do once in a while), I've grated it finely and added it to cream make a goat-cheese sauce for pasta. It's very good.

You can also buy a not-yet-dry chèvre, wrap it loosely in kitchen paper, and let it dry in your refrigerator for a week or so until it gets completely hard. Then grate it.

Try making pesto with other greens: radish tops are very good in the place of basil, which isn't really a local product, as far as I can tell. Parsley can always be added to stretch the greenery, and herbs like coriander (cilantro) are good too. Substituting other nuts for the pignons de pin works well.

Ken: Agreed, basil is not a Tourangeaux speciality, but I like it the best of the herbs to make pesto with, and there didn't seem to be a really local substitute, so I stayed with basi. Coriander is good too, but the resulting paste is better used on fish or white meat rather than with cheese and bread.

Our hazelnuts are normally bored into by little weevils and therefor rendered inedible. Does this happen to yours, too, or do you do something to prevent them from getting up into the trees?

Ken: thanks for the correction to my French. I've edited the post to reflect your comments.

Walt: I had a few duds in the batch, but nothing to really worry about. I can't think of any way to stop weevils climbing up into a hazel tree, so hopefully we will continue to remain free of them. We have seen evidence of the nuts being taken by some fairly large bird (woodpecker or jay I think), but there is more than enough to go around at the moment. If the harvest is as good as it promises to be, we'll be offering them to friends rather than let them go to waste.