The Wildlife Garden 12 months on

Last year Simon helped me prepare a rough garden bed and I sowed seed to grow annuals and biennials that would attract insects. Once it was sown, I just left it alone, and it has been fascinating to see what has come up this year, and what the mix is between plants that I sowed and plants that have just come of their own accord.
This is what it looks like now. 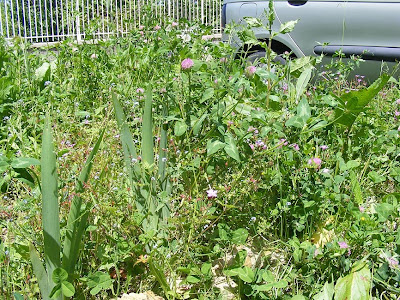 The garden varieties that have come again this year are:
Sweet Williams like crimson velvet just
coming in to bloom. 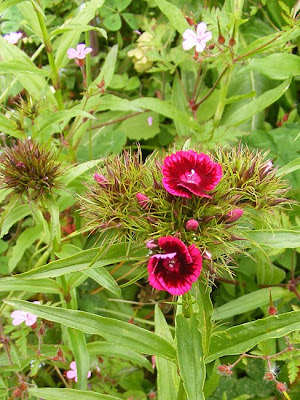 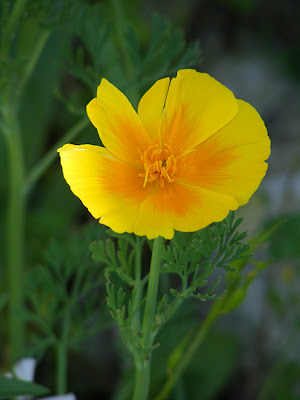 The wild plants that have come of their own accord are:
The tiny (2-3mm) flowers of
Early Forget-me-not. 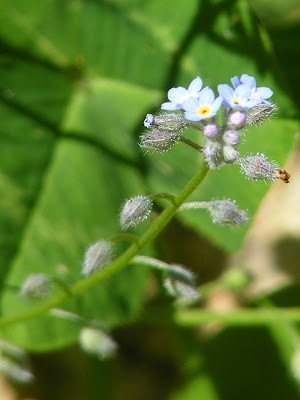 In addition to the wildflowers, a great variety of insects have visited: 4 species of damselfly; 4 species of bumblebee, European Honey Bees Apis mellifera (Abeille européenne) and probably a dozen other species of solitary bees and wasps; a similar number of fly species, including several types of hoverfly and 3 species of beefly; a young bush cricket; half a dozen species of butterfly and a few moths; and a couple of bugs and beetles – and these are just the species I noticed without any effort at all. The place is an insect café, and the regulars know that there is food and places to sit in a warm undisturbed spot. One of the nice things for me is that I can hear everything buzzing, and get to know the different pitches for the different species. In London this was impossible, as there was always background traffic noise. 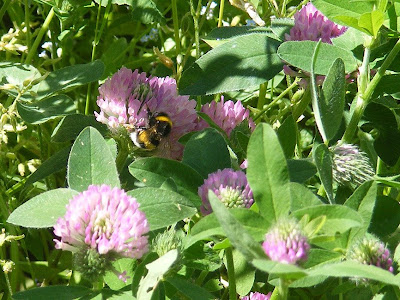 A Carder Bumblebee (probably B. pascuorum) also
enjoying the clover. 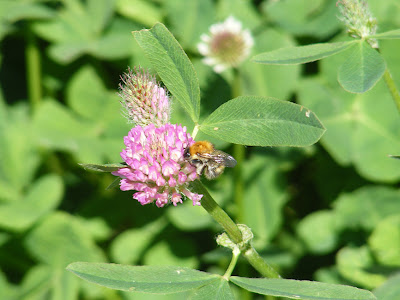 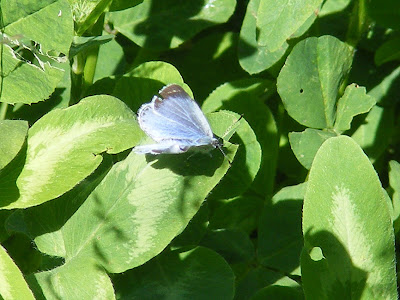 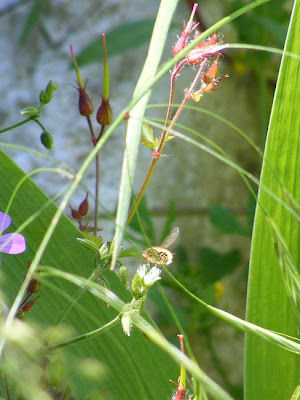 Simon is embarrassed by this garden and worries that the neighbours will think we are lazy and untidy, and that all our hard work removing the bramble patch will come to nothing if I let the space get overrun again. I think that the neighbours are sensible enough to realise that we have quite enough to do at the moment and will not make hasty judgements. In the next few weeks I will have to tidy it all up, as it is in rather an inconvenient place, but it has been a fun and enlightening exercise while it lasted.

Hi Simon & Susan,
I'm catching up on your latest posts.
I think that's a pretty good variety of wild flowers & plants.
Nature sowing by itself.

Don't worry about what the neighbors/ others might think !
You have lots of work in the meanwhile...

I have been reading your posts for a while, yes you have lots and lots to do..so I wouldn't worry that much. I think the same when people walk past my garden but it will get done!!

Thanks gals. I think I've probably redeemed myself with the garden out the front anyway, which is clearly maintained :-)

Thanks for that, Susan. Quite enlightening, as we see many of these same plants and insects in wild patches all around the Renaudière vineyard.

This post is great. The best thing would be to put a stalk near each plant you want to keep and place its name on it. That way the neighbours will understand what you're driving at and may learn something by the same token.