A Day of Action

We have now been living here for over two weeks (give or take some days away for me) and have decided that washing in a plastic basin leaves something to be desired. We reached a decision the other day that we would buy an instant hot water system like one of these and install a cabine de douche that sort of looks like this. This will be installed on our new bathroom floor, using the old wastewater pipe and some new plumbing I will be putting in.

With this in mind we went to the hardware shops in and around Chatellerault (of which there are many) to price shower units. Most of them were well out of the price range suitable for temporary installation, but we did find one we rather liked (and could afford) in Brico Depot. (The plan here was to include a link, but their site is down for maintenance.) We ummed and ahhhd for a while - as you do - and decided not to buy there and then because I wasn't sure if it would fit into the space between the wall and window, so we would come home to measure up and make a further decision. We will be returning, with trailer, to buy the shower some time later this week or early next.

While we were hardware shopping we bought a venetian blind for the laundry/toilet. This means we can have a light on when we use the room at night - previously we just had a cheap red gauzy net thing up which you could see through.
No more rummaging in the dark! 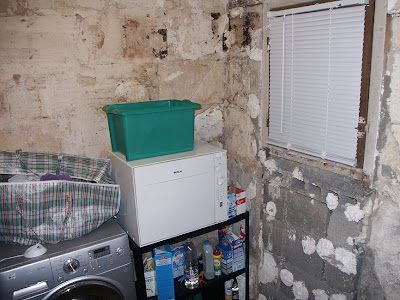 We stopped for lunch at a Brittany themed crêpe house in Chasseneuil and had three courses and cider for 10€50, which was rather good and tasty, and then because the time was only 1.00pm and the shops wouldn't be open until after 2.00 we went to the riverside park in Dissay.

There we watched newly emerged Banded Demoiselles Calopteryx splendens (the French name is le Calopteryx eclatant) drying their wings before flying off. There were dozens of glittering blue males flipping and flapping in their rather indecisive way over the riverbank grasses and herbs and out onto the Water Crowfoot growing in the shallow sluggish river Clain.

A Banded Demoiselle newly emerged from
her laval case, which is also visible. 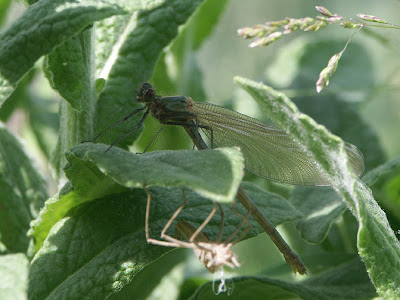 When we arrived home we found that some small plants had been delivered by friends for us to babysit while they are away, and a box of cherries. Clafoutis for pudding tonight then!

Email ThisBlogThis!Share to TwitterShare to FacebookShare to Pinterest
Labels: Bathroom, Insects, nature and wildlife, Our house in Preuilly

Clafoutis is my favorite. May be in Mareuil......

Actually, it may be clafoutis Saturday night now, as this morning I got some cheap Garrigettes, très fragile, must be eaten today, so today we are having strawberries and cherries macerated in a little vanilla sugar and kirsch.