The Van Man goes to London

Susan mentioned that we hired a van and I drove to London. It was an interesting trip...

I left Preuilly on last Thursday at a couple of minutes to 8.00pm. I had decided that as the van was not fast enough to take advantage of the autoroute speed limits and the tolls would be about three times that for the car (so about 100€ each way) I would drive by the national routes. This worked quite well. The trip is a couple of hours longer, but this is almost compensated for by the view of Chartres Cathedral all lit up. Unfortunately, it does entail approaching Rouen from a different direction, and this is where the fun started.

Instead of turning off where the autoroute passes under the road I was on I drove straight ahead. This got me onto the main road the follows the banks of the Seine (Quai de Paris et al). I realised almost instantly that I had made a mistake (Rouen and I have a track record, you understand). I couldn't turn the car around because the road is divided, and the inner lanes keep turning into underpasses, and I had no idea where they went. Finally I found somewhere to do a U-turn, but unfortunately this got me onto the combination bus lane/tram tracks, and I was pretty sure I wasn't meant to be there...

When I managed to get off the tram tracks I found myself on a ramp onto a bridge crossing the river back towards le Mans, which wasn't part of the plan either. Four consecutive left turns didn't get me back to the road I had been on, but rather the middle of a suburb with no signposts. I was bemused by this, rather than worried, because Rouen always does this to me and I knew that sooner or later I would find somewhere I had been lost before and all would be resolvable.

At 1.00am Rouen spat me out onto the A28 towards Boulogne, and my plan was to stop at an aire de service, in this case the one at Maucomble. It was a bit full and I think I managed to wake everybody up, first by having to reverse the whole way back through the carpark because I had not managed to make my mind up as to where to stop, and then by slamming doors and cooking dinner. Still, I managed to get a couple of hours sleep. 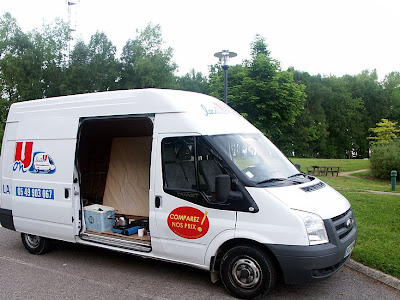 Four hours later I woke, drove to a more picturesque aire (Bois du Coudroy) and had breakfast. This was good and civilised and everything, as I managed to make myself coffee.

A couple of hours after that I was driving into Boulogne, and was pretty chirpy at having saved all that money and seen some new part of the country, but most of all because I had managed to avoid the stretch between Rouen and Le Mans on the A28 (maybe one of the country's most boring roads).

I was using the new ferry service from LD Lines, which replaces the Speedferries service Boulogne - Dover. The LD Lines boat is a lot bigger, so it gave me some different views of the home of the largest fishing fleet in France (apparently). 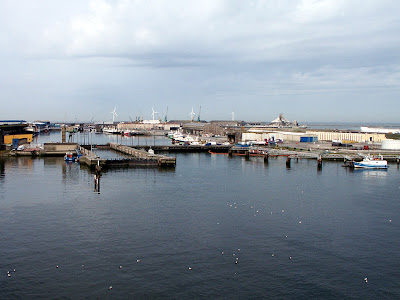 The ferry was nowhere near full, so after taking a lot of photos I found myself a quiet corner and had a snooze. I managed to wake in time to see the white cliffs hove into view before collecting the van and setting out on the English motorway system in a long hired van - which I had been anticipating with the sort of joy I usually reserve for Rouen. Luckily, I found the driving not to be a problem, and 2 hours later I was standing in the driveway of the house we lived in for 10 years. 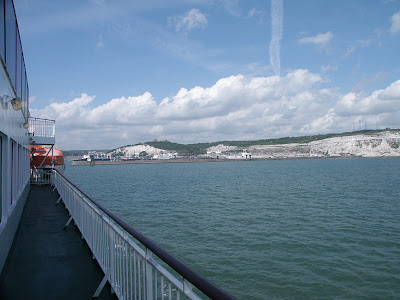 That was weird - and I felt absolutely no attachment or regret about the place - just a desire to get loaded and get away as fast as possible.

The thought occurred to me while I was in London - 20 years as a professional musician, yet this was the first time I had ever driven yer actual Ford Transit. Not a bad vehicle, as it turns out. I may have clipped one or two curbs, but that is mainly due to the length of it (just under 6 metres) and the fact there are some pretty narrow roads around. The seat was more or less comfortable, it steered ok - although when fully laden it does bear remembering that roundabouts are things to be respected and forward planning is needed - and when empty it zipped along not using a whole bucketload of fuel.

Simon, that's quite an ordeal you've had. The best part of it is you do not have any regrets about leaving for good your house in London. Your life is now in France and you are looking forward to renovate your soon to be charming house in Preuilly. Now, just like Susan, you are a true Preuilliacien!

I do share your opinion about driving in Rouen! My family lives there, but everytime I'm driving there, something has changed and I get lost... ;-)

Thib. I am glad it's not only me. I have never got the hang of Rouen, except if I simply follow the road that runs between the railway yard and the seine.

Does "getting loaded" mean the same thing in non-U.S. varieties of English. That could be dangerous when you have a long drive (not to mention customs) ahead of you. ;^]

Ken. I didn't think about that - maybe getting loaded would have reduced my antipathy...