A tale of two belts

It was belts that very nearly meant we didn't catch our train to France.

First belt to cause a problem was the belt that makes the twirly brush thing wizz round in the vacuum cleaner. (You know the one.) Because the twirly thing wasn't doing twirling the vacuum cleaner wasn't picking up any dust off the carpets - and did we have a lot of dust! This made Jono's task even more difficult, because he had to use the nozzle and the furniture brush.
JB checks the vacuum cleaner's
lack of suck while Rosie looks on. 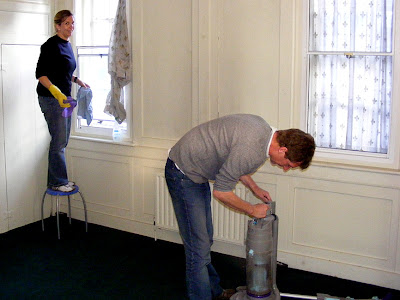 At 7.50 I decided it was close enough to 7.30 (our latest feasible departure time) to warrant shutting the house and leaving pronto. We said out thanks and farewells, climbed in the car and drove off. One hundred metres down the road there was an almighty flapping noise from under the bonnet (hood) of the car, which was slightly worrying as we had a fair distance to drive, and a deadline.

I opened the bonnet and all looked normal. Nothing out of place, and no obvious damage. I turned the engine over while Susan watched, and it became evident that the alternator belt was shredding itself and a strand of rubber was whacking bits of engine as it went round. I grabbed my trusty toolbox, took a pair of side cutters, and clipped away as much of the flapping bit as I could. After a couple of goes at turning the engine over and clipping more off I shut the bonnet, we jumped in the car, and decided to risk it. A couple of hundred metres down the road the flapping stopped, but the alternator light didn't come on so we assume that it was the shredded bits letting go and all would be OK.

Which so far it was been... which is nice.

We made it! The car on the channel tunnel shuttle 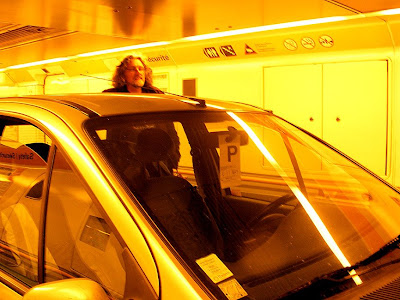 Yesterday we did a half day start to sorting out the house. The dishwasher and washing machine are attached and working, and the kitchen is organised. We also discussed the garden, and I have been looking at my options for getting the rest of our stuff here - there are 4 or 5 cartons and 2 dozen plants to bring (if we can). After checking the price of hiring a van and driving to London and back (which is more expensive that paying someone else to do the same thing) I have decided to drive back with the trailer, pick up what I can, donate the rest to charity and then drive to Preuilly. Again.

I had hoped that sort of thing was behind me.

We went for a walk yesterday evening.
This is the Lavoir, Preuilly sur Claise. 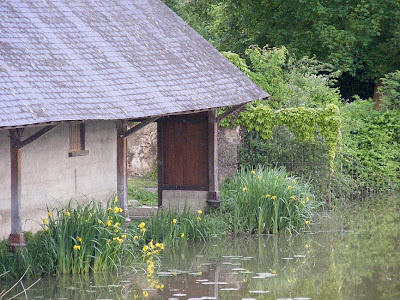 Last night we had a thunderstorm that seemed to go on for ever. This meant I had to walk all around the house checking the guttering hadn't blocked while we were away, and that the gullies that take the water from the downpipes were flowing properly. After that I had to check the barn to make sure it wasnt leaking on all our posessions, and then move some boxes away from where water was seeping under the front door (My woodworking last year was only 95% effective). At about midnight the thunder had stopped, but Susan says it returned later in the morning. I didn't hear that, nor did I hear the garbage truck arriving at 5.00am. I was sleeping the sleep of the just.

I am extra special chuffed by the fact I had washed some bathtowels yesterday and they were on the line during the rain. This means I get fluffy towels, something we never managed in London because we had to dry everything on racks inside the house.

Email ThisBlogThis!Share to TwitterShare to FacebookShare to Pinterest
Labels: Moving House, Pictures of Preuilly, The Car and Driving

We had a thunderstorm starting at 3:30 a.m. I wasn't sleeping so I got to enjoy it. Though I didn't really enjoy the very hard rain, worrying about leaks. None showed up, and the hard rain lasted only 15 or 20 minutes. After that, we had an hour or more of very light rain. I'm afraid our garden is going to drown.

CHM should be in Paris by now. I'll call him tomorrow morning. See you soon, I hope.

I have to say, even tho' I just know you both through the wonder of the blogosphere, I am very excited for you. You both are very thorough in telling your journey from homeowners, renovators, to official Preuilly dwellers that I wish you a happy congratlations and prayers for all the transitions. But You are apparently (sp?) old pros at the country to country move...hey sounds like another new business as an online resource for others on the big move too.

Vacuum cleaners that don't suck really suck. And the ones that suck well don't suck at all.

Got it? Or is that just an American thing?

Ken - Looking forwards to it

Jenny - Thanks. I'm not sure one ever gets used to moving countries.

Walt. Got it. Not just American, there are many Australian embellishments of the same thing, many of them rude... So I am told.