I must be honest – I am not really all that keen on pain d'épices generally. However, since this is a much-loved traditional cake in France, I have perservered with it. I've tried to like it and acquire a taste for it, but it features large quantities of honey and a particular mix of spices that strike me as far too medicinal. I love honey of all sorts, but on toast with butter, not combined with spices like cloves and anise which only accentuate the medicinal character.

Honey is not easy to cook with. It usually dominates any recipe you add it to, and in the Touraine, the very strong dark miel de sarrasin (buckwheat honey) is widely considered the best honey for pain d'épices. It makes for a distinctive and memorable cake, but for me it's not really the best use for this wonderful honey, regardless of what the locals may say.

Whenever I come across a new recipe for pain d'épices, I like to try it in case it is The One That Changes Everything. Well, hurrah for David Lebovitz and his friend Flo Braker. They've come up with the goods. 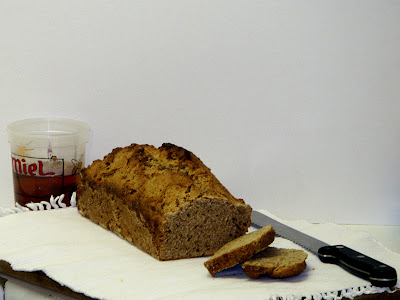 Comme d'hab (As usual) I tweaked the recipe a touch to suit myself. I substituted ground allspice for the ground cloves and cardamom seeds for the anise. I thought this combination worked particularly well, even if it isn't quite traditional. There is orange zest in the recipe, and cardamom and orange always work well together. I also like the crunchy texture of the tiny cardamom seeds. The honey I chose was a relatively mild but not characterless English Borage honey. I noticed that David L comments that he feels buckwheat honey is too strong also.

For my next attempt at it I will substute some of the flour for about half a cup of finely chopped walnuts. I think they will add a texture and flavour that will work well, adding an alternate local touch to the buckwheat honey and making an ever so slightly more moist cake, with a pleasant nut flavour that will combine with the spices admirably.

This pain is more like a British teacake such as Bara Brith in that it is dense, not terribly sweet, and best eaten spread with butter, or even better, with soft cheese (St Moret would be a good choice in France, outside France, good old Philly is the obvious one). Traditional Pain d'épices itself has little or no fat, so you could also choose the traditional French approach of dipping your slice in coffee or tea for a lo-cal treat.

The rising agent is baking powder, not yeast. Susan over on Wild Yeast recently posted a most interesting looking recipe for pain d'épices using mustard to provide the heat that pepper normally gives. I haven't had a chance to try this one yet, but will eventually get round to it.

Pain d'épices lasts for days and days, if anything improving with a little age. It also freezes very well.

You can see a previous attempt at Pain d'épices here.

I was salivating all over the keyboard while reading your post! Pain d'épices is amongst my favorites and I'll try your several recipes when I'm back in SoCal, not lo-cal, mind you.

However, I'll stick to anise, because I like the taste. Somewhat stronger than the delicate one of fennel, that I love.

I think all French people love anise, but I find it quite difficult to use so that it doesn't just taste medicinal.

I agree with you, Susan, all that pain d'épices is too medicinal in taste. Maybe it comes from growing up in America, where pies, cakes (called breads, like pumpkin, ginger, or zucchini breads) were so heavily spiced that they tasted only of spice. It was as if they were flavored with cough syrup.

Is pain d'épices really a Touraine thing? I think of it as Burgundian or Alsatian. A friend always brings us some from Vichy when she goes there, and we choke it down.

I may be mistaken, but I think pain d'épices is a specialty of Dijon, like liqueur de cassis or Grey-Poupon!

I think it was Burgundian / Alsatian originally, but it is so widely made and loved in France that it has been adopted in the Touraine as well. Around here, the apiarists often sell it at fairs because it is a way of featuring their honey.

Aha...so it's really Greek (like every recipe with honey in...) Thanks for the link Beaver :-)

It's the Larousse Gastronomique that says Reims en Champagne was long the capital of pain d'épices. That surprised me, because I always thought it was from Dijon too.