This place is amazing, and nobody knows about it! Well, actually, I suspect that the locals know about it, but the entrance is on a main road with dozens of travellers passing by each day. It's directly opposite a well known look out point, and people often break their journey there. But they don't venture across the road. You can't get down the track unless you are a reasonable bush track driver, and it is not signposted, so the emerald valley below is protected from the hordes so far. I don't suppose it will be very long before word gets out.

The sides of the valleys here are old growth wet Eucalyptus forest – great tall straight trees, in places logged for timber and pulp. The bottom of the valley is lined with moss covered boulders, at the base of which runs a stream. The banks are entirely clothed in huge tree ferns Dicksonia antarctica. You could not get a greener place. It looks like something out of a garden design magazine, full of special tender plants. It's part of a large and ancient forest complex. Some of it is protected as National Park and Nature Reserve, but there are also commercial logging activities.

If any of our readers are going to south-eastern New South Wales, I will tell them privately where this paradise is, but until then it can remain a secret.

Or do you think I over-egged it, and this is the reason people don't come? I dunno what their problem is...I only encountered one of the creatures on the list (leaches, if you want to know). 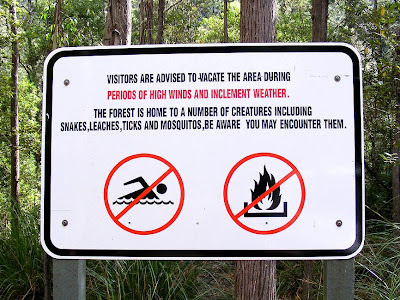 I did, however, encounter the biggest ant I have
ever seen – a Giant Bulldog Ant Myrmecia sp. 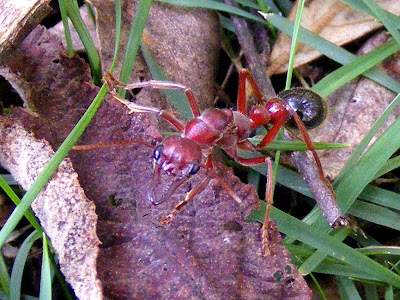 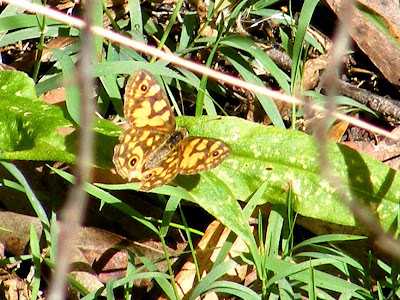 And anyway, the tree ferns are truly spectacular. 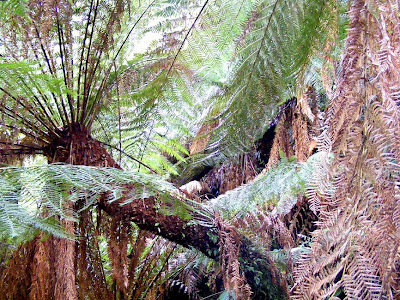 Although everything is extremely green
and it's surprisingly difficult to photograph well. 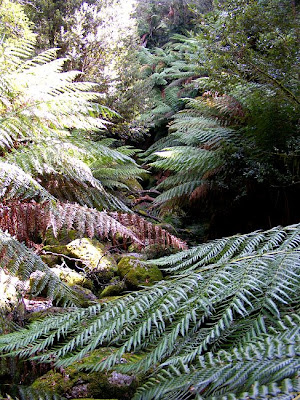 I cannot tell you what a thrill it was to see mature tree ferns in such abundance in their natural habitat. Sadly, that's another reason for being coy about where it is. My parents tell me they visited a well known tree fern valley not so long ago, and discovered that every one had been sawn off, presumably by thieves supplying the garden trade.

You're exactly right. This should be preserved at all costs.

Poachers and thieves should be shot at sight.

Malfeasance of greed should be taught, not encouraged, by parents and at school.

Those "fougères arbustives" are spectacular.

P.S. I meant to leave a nasty comment on Agnès Sorel's blog but was frustrated by not being able to do so.

CHM: You'll have to explain the Agnès Sorel comment please. I can't see a connection between her and tree ferns, but I'm guessing that's because I don't know enough detail about her life.

Well, Agnès Sorel is the first of your followers or at least it is the first icon with a detail of a well-known painting by Jean Fouquet: "La Vierge sous les traits d'Agnès Sorel."

If you have a chance to go through Nouans-les-Fontaines, you should not miss to have a look at the large painting by Jean Fouquet in the church.
Here is a link:
http://www.cg37.fr/index.php?media=139&id_commune=176

Musée is the right spelling, of course. My mistake.

CHM: Ah! I knew the image in that icon was familiar, but didn't think about it too much, so hadn't realised it was Agnès. It is used by a blogger from Australia calling themselves 'the curator', who writes a blog called Art Inconnu, focusing on little known and under-appreciated art. There is a lot of good stuff there. I find I know about a third of the works and / or artists featured, but the blogger has a good eye / good taste, and the blog is a nice little visual treat every few days for me. I've commented on the blog before, so I don't know why it wouldn't let you. Are you just being grumpy because you don't think that picture qualifies as unknown or under-appreciated, or do you have other reservations about the blog? Nouans-les-Fontaines sounds well worth visiting, and we will get there someday.

Susan, when I said nasty in fact I meant very appreciative. I just was hoping that "Agnès Sorel" would read my comment in your blog because I was so frustrated. I believe in anonymous comments as long as they stay within the boundaries of good taste. Poor "Dame de Beauté", R.I.P., had nothing to do with the whole thing.

I even was going to ask "Agnès Sorel" if the curator would be interested in pictures of pastels by my uncle (late 19th early 20th century) to post in his blog. Apart from my family and the musée de Péronne nobody knows about him and it is a crying shame.

I might go back to that blog, but I'm not so sure. "Chat échaudé craint l'eau froide."