In March I visited the Powerhouse Museum in Sydney and had an opportunity to go around their exhibition Inspired, which is an examination of design trends from the last few centuries and tends to focus on Australian designers who have been influential either at home or abroad, as well as those born overseas who have had specific influence in Australia. There is a surprising number of French connexions.

The vases first and second left and the one at bottom right are hand-painted on Limoges porcelain blanks. The two on the left were decorated by Lawrence Hotham Howie in South Australia, about 1910. He has used very distinctive Australian wildflower motifs, waratah and eucalyptus. The one on the right with a cicada motif was painted and gilded by Delia Cadden in Sydney about 1913. 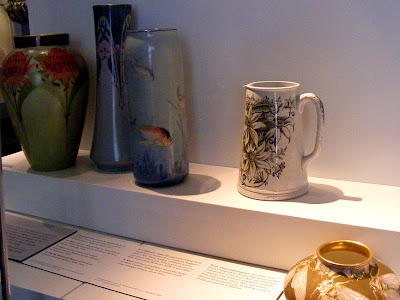 Limoges is chiefly known for the technical excellence of its Renaissance enamels and later, porcelain, which is still manufactured in the area. By the 19th century the Limoges factories were mostly producing blanks ie plain white ceramics, which were shipped all over the world to supply ladies who indulged in the popular pastime of china painting. The blanks were also used by professional designers and artists like Delia Cadden, so although Limoges porcelain is very collectable today, the quality varies wildly. The city itself is about two hours away from us to the south. We get to go there every so often by accident, when our plane is diverted from Poitiers due to fog.

The other object that interested me in this case was the jug. It is English creamware with a transfer print of flannel flowers from 1914. I own a jug reminiscent, but undecorated, purchased in Futurotroc on the outskirts of Poitiers. I use it for milk, since ours comes in a plastic bag, which can be a bit dodgy in the fridge. When I bought the jug, it was a toss-up whether I would choose it or a set of Limoges coffee cups (demi-tasse) and saucers. I figured that for the time being at least, I'd get more use out of the jug. 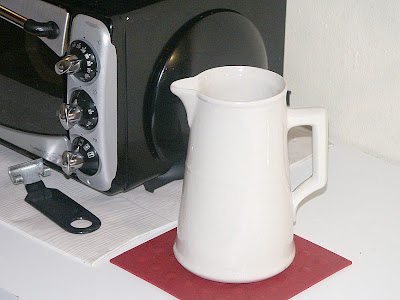