Orchid of the Moment 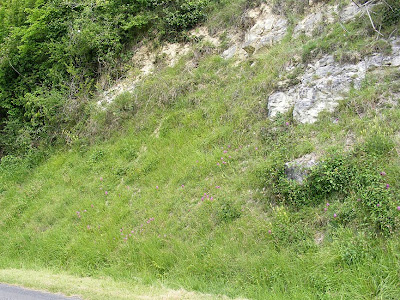 The Pyramidal Orchids Anacamptis pyramidalis subsp. pyramidalis (in French Orchis pyramidal) are out in profusion on certain sunny chalky hillsides and roadsides this week. 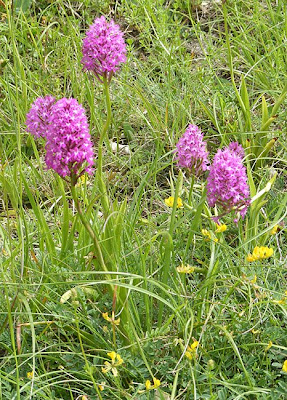 This one is visited by a male Thick-legged Flower Beetle Oedemera nobilis (in French Oedémère noble), easily recognisable by his enormously 'muscular' thighs (click on the picture to enlarge and check them out). Note the wild marjoram Origanum vulgare (in French Origan) in the background too. 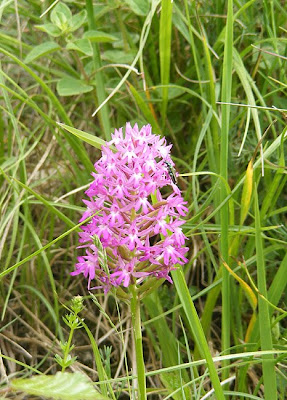 I even found a Pyramidal in the shade of the woodland on the hill behind Chaumussay. The Lady and Fly Orchids are almost finished here now. Once they have flowered, all trace of them disappears very quickly. The Monkey Orchids are still in flower, but past their best.

The Violet Limodore is in bud by the path. Let's hope no one picks it this year. I found evidence yesterday of a number of Lady and Monkey Orchids which had been picked, their stems showing a neat diagonal cut made by a sharp blade.

Chris Luck, from Planete Passion, says that picking of wildflowers including orchids seems to be on the increase. People have traditionally picked them for personal use as table decorations, but Chris fears that some of the activity now is commercial.

What I find interesting is that I never see signs that roadside orchids have been picked. It's always those growing in quiet, semi-secret places where one rarely meets another person. It makes me think that the orchid gatherers know that what they are doing would be frowned on by others.

Lady Orchids are common over much of France and not protected in our region, and Centre is one of the few regions where Monkey Orchids are common enough that they are not protected, so it is not illegal to pick them in the wild here (note that Monkey Orchids are protected in all of the neighbouring regions, including Poitou Charente). Personally though, I am uncomfortable with picking any wildflower and would discourage the practice. However, the rule of thumb, if you really want to pick wildflowers, is to only take 10% (ie one in ten). This sounds like a tiny amount, quite unnecessarily conservative, but experience shows that this level of harvesting ensures the plant remains numerous enough to set sufficient seed for next year; to survive anyone else who may come along and pick more; for enough to make it through any spells of bad weather that may hit, and so on. The same rule of thumb applies to the harvesting of wild food plants. Never underestimate just how quickly and dramatically a common species can decline beyond the point of no return.

Pyramidal Orchids are localised and quite rare in this region, and as a consequence are protected and it is illegal to pick them. They grow in numbers in relatively few places, and it is a joy and a privilege to be able to see them.

Email ThisBlogThis!Share to TwitterShare to FacebookShare to Pinterest
Labels: Chaumussay, Insects, nature and wildlife, orchids, Towns and Villages near Preuilly

Hello Susan, Since last year I've taken an interest in orchids ... not the wild onces, mind you. But the kind you get as a present on holidays and/or birthdays.

I've put a lot of effort in trying to 'restart' them, giving them a cup of demineralized water at room temperature once a week, spraying their leaves with a special substance, providing sufficient indirect humidity, etc. Well, everything the book/internet says :)

Until now I've had very little success, with only one plant out of six flowering for the second time. Can you tell what I'm doing wrong? Martine