We have caught the Eurostar from London to Paris and Brussels a number of times, but until the day of our move we have never put our car through the tunnel.

We decided that because we had to be in tip-top condition on Tuesday that we would go by Eurotunnel and book into a hotel for the night. This was a wise move as the channel was pretty rough due to high winds, and I don't do lumpy sea any more. Compared to the ferry the tunnel is a lot more expensive, but it saves at least an hour on your trip. Another thing I like is the stated policy that if you arrive within 2 hours of your train's departure they will put you on the next available train. This compares favorably to the ferry companies who tell you over the phone "if you're late just turn up and we'll take you" but never put it in writing.

Not a very inspiring photo, but this is
one Eurotunnel shuttle from another. 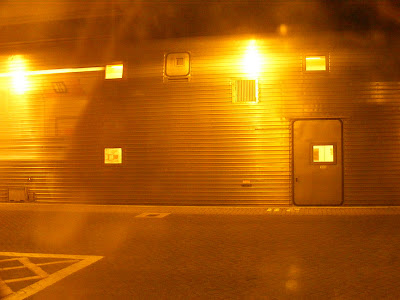 Security is tight - explosives checks with sniffer machines, but no passport control was in operation, and it's just a case of follow the signs, drive onto the train and have a powersnooze. There is nothing to do on the train, but there are toilets (which neither of us felt the need to try out). The trip takes about 30 minutes, and you just drive off at the other end. We were surprised at how quick unloading was compared to the ferry.

To celebrate our arrival in our new country we made a movie.

We like the tunnel. We like the way getting on and off is more efficient than the ferry. Also it's nice not to have the usual scrum to leave or rejoin your vehicle that you get on the ferry. You do get a few people wandering around but at least you don't have to endure coachloads of marauding teenagers. It's also the only way we would travel with our dog - because you stay with your car you stay with the dog which we are much happier about than leaving her on the car deck.

P.S. Forgot to say - I like the movie ! Did it feel different this time - apart from the fact you were on the train - knowing you were not really going back ?

Jean. I have to admit it didn't actually feel like anything at all! I was so exhausted by the day that had been before, and stressed by the thoughts of the day to follow, that I forgot that I should be feeling.

Very interesting; Thanks for taking us on the trip !

I have never been on the Eurostar, so this would be quite an adventure for me. D would rather fly into the UK ( he is not feeling at ease driving on the left side !!) .

We have only been to London once & before Eurtunnel.

We love the Eurotunnel. I've just booked up a day trip for £44 and we have always found the cost for longer breaks to be comparable to ferries or within shouting distance of them. The key seems to be to book up nice and early and to be prepared to travel early/late to get the best rates.

It is quite an experience driving onto the train though. I've done it many times now but it's still a surreal thing to do :-)

MAtt £44 is amazing. I think we paid about £60 for one way, as compared to about £25 on the ferry (usually). I found the driving onto the train thing quite a thrill - very 1950s "vision of the future"