Simon set off yesterday evening in the van we hired from SuperU to pick up the remainder of our possessions in London. I am impressed with the stoicism by which he volunteered for this irksome task and hope that the journey goes as well as can be expected. 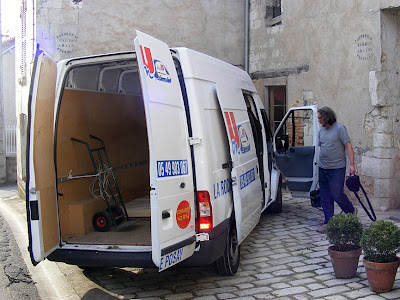 On the positive side, as he says, once it's done, it's done, and he can settle down and focus on being Prulliacien.

And the trip has resulted in two milestones for me. First, I got to drive up the Grande Rue all by myself, coming back from SuperU, while Simon drove the van. True, driving up the Grande Rue is the direction which is not always blocked by parked cars, and true, at 7.30 on Ascension eve, very few cars were parked on the other side any way, meaning that the three cars coming down the Grande Rue were able to easily weave and dodge the parked cars and me. Nonetheless, for someone who has not driven for 12 years except a few practice runs on quiet French country lanes, driving from the outskirts of La Roche-Posay, via two roundabouts, the main road between La R-P and Preuilly and the notoriously fraught main street of Preuilly-sur-Claise without causing anyone along the way to look alarmed is an achievement I am quite proud of.

The second milestone is that this is the first time I have spent alone in our house. Simon has been here a lot on his own, but I never have.

Email ThisBlogThis!Share to TwitterShare to FacebookShare to Pinterest
Labels: Moving House, Our house in Preuilly, The Car and Driving, Towns and Villages near Preuilly

As you say you now are a true Preuilliacienne. Good for you!

Susan, an old friend of mine once gave me some really sound advice : it's only the first time that you do anything that it is difficult. The first night I spent on my own at our little house I was very nervous but after that I felt even more at home.

Thanks both of you :-) I have survived, and have even achieved another personal first for Preuilly – washing my hair! Simon has rung and the trip has been easy so far.

About the candlelight dinner party; were you serious? If so, thank you very much for your hospitality.

It hasn't to be a real dinner party, though. We'd be happy to share a drink or 'casse-croûte' with you in your fairy tail dining room.

We'll be in your area on Wednesday, June 17th. So if the date suits you and Simon we would like to meet you.

Is it OK with you if I were to ask our mutual friend Ken for you e-mail address ? (I hereby give him the permission to give you mine) to fix a rendez-vous. Martine

Those are good milestones for you.

Simon is a wise man; once you get the boring tasks like moving, you can concentrate with your life in Preuilly.

Keep up the great work.

Martine: yes I was serious :-) I know you have met Ken & Walt, so we would be delighted to meet you and your husband too. Drinks would be better actually – dinner parties are probably a bit ambitious at this stage. You will understand when you see how makeshift everything here is. We have hi-speed internet, but no hot water and the kitchen is 2 gas camping stoves and a mini oven. I have just covered the table with a particularly unglamorous tablecloth to protect it, but for you we can uncover it :-) You can email us via our profiles, btw. 17 June should be fine for us and we look forward to seeing you.

Is it because you are used to driving on the left hand side ( Australia and the UK) that you are nervous in France?

Beaver: the side of the road isn't a problem, strangely enough. I've never been a confident driver, and never drove in the UK – too crowded, too fast, pedestrians behave differently to Australia and I was convinced I was going to run someone over. This long break of not driving at all may account for why I've adjusted quite easily to switching sides, but it took me quite a few practice runs to get any sense of where the car was on the road and how close I was to anything, I think also because I hadn't driven for so long.