From now on, it's Every Day on the Claise

Susan and I arrived in Preuilly at about 1.30, having been delayed somewhat in Rouen. (More on the trip later.) John and Jill arrived and helped us unload the car, and about 90 minutes later David and James arrived in the truck.

Within about 10 minutes of starting to unload the corner of the barn I had cleared for storage was full, and as things progressed our belongings took over the whole barn. I am not sure whose stuff we are storing but we can't own that much stuff. David and James were brilliant, as were John and Jill who arrived again to help unload the truck. 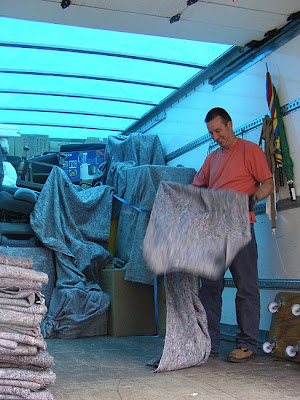 David and James had suffered a poor ferry trip - it was REALLY windy so the ferry was a bit bouncy - then a long drive at not very fast speed in an overloaded truck, yet still managed to be really efficient and happy and chirpy. I am not sure I would have been capable!


James. It's good a see a man happy in his work. 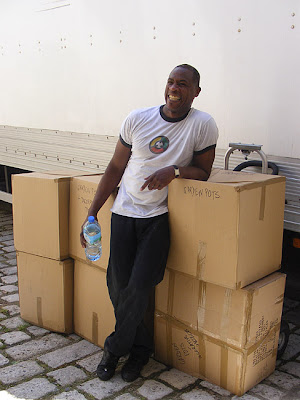 Susan went up to l'Image and booked them a room for the night, and then she set too in the kitchen. After unloading we sat in the garden, listened to the silence, and took in liquid replenishments and a plate of saucisson, chevre and fresh baguette.

Then it was over. The truck was reversed all the way down the street, John and Jill departed to cook dinner for us (thanks again) and we were left, bemused, in a house FULL of stuff, to start our new life in France.


Reversing down the street 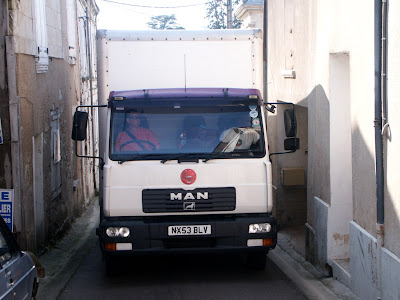 Everyone has been brilliant - from JB Rosie Kippa, Pat and Geoff, who cleaned lifted and encouraged like fury in London, John and Jill who volunteered to unload and then provided us with dinner, and David and James who were incredibly cheerful even though I am sure they were overworked.

p.s. I know we are in France and an hour in advance of ourselves London-wise, but we have decided not to change the time we post on the blog. This will give us a chance to write entries on the day they post.
Posted by Simon at 10:00

Email ThisBlogThis!Share to TwitterShare to FacebookShare to Pinterest
Labels: Moving House, Our house in Preuilly

Welcome to your new house. It's always such fun and so stressful to move. Hope everything works properly.

Don't worry, you'll seem to have a lot less stuff once you get it back into the cupboards....assuming you have some cupboards !! Unpacking all those boxes is a lot more fun than filling them. Good luck and congratulations on making the move to France. (Wish we could, too !)

Here starts a new life for you both in France.I'm excited for you . I've been there myself,(sans le camion).
And I think that you had a great team to help you move and settle in. It was nice to spotlight your hard working movers too !

ohhh, the silence in the full house.