Our gardening activities, being restricted at this stage to the front courtyard and therefore very visible, have created a lot of interest from the locals. Almost everyone stops to inspect, and if I am around, comment. Usually the comments begin with Ca pousse !, which took me a while to figure out, but Bengt gave me the clue I needed. The verb pousser means 'to push'. You see it all the time on entrance doors (poussez), but the word can be used quite broadly to mean to thrust, shove, urge on, drive, impel, prompt, utter, grow, shoot, push on or forward and pousse is growth or shoot.

The neighbours are impressed with the size of the plants we have arrived with and all the new growth they are putting on. They are particularly curious about the contorted hazel, asking what it is. So far, everything has been pronounced très beau, even by those who I am inconveniencing by removing their handy free parking space in a very narrow street.

Yesterday, before the rain started, I clipped our potted box bushes into spheres in the front courtyard. An elderly woman stopped and complimented me on how nicely the box bushes were shaping up. When she realised my French was limited she asked me if I spoke anglais. We then continued the conversation with her using her rusty but quite good English.

Note the hi-tech cutting guide, made from a piece
of old electrical flex I found lying about. 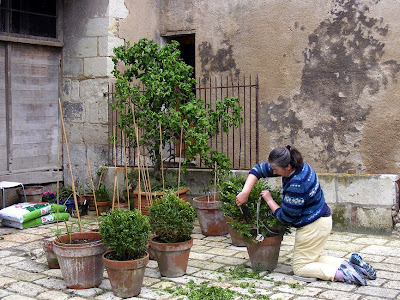 Next a man drove down the street, clearly with the intention of parking on the courtyard, but stopped when he realised it was occupied. Winding down the passenger window he called across something along the lines of 'Hey that's my parking spot!', to which my response was 'No, this is my courtyard!' It was all perfectly amicable, and he then proceeded to inform me that I should wait until August to trim the box bushes. I mollified him by saying that they had not been clipped at all last year, so I thought I would do them now so their twigs were not too thick and tough to clip easily. Actually, I think now is probably ideal for clipping box in the Loire, and they will probably need to be done again in August. In England box is traditionally clipped on or after Derby Day in early June. This is to make quite sure there is no danger of frost. I suspect my neighbour was suggesting August because the box won't grow much after then, so looks good all through winter, and then puts on plenty of attractive bright green pousses during the summer.

I think it's great that you can leave beautiful and valuable plants on your courtyard without the fear that they will be stolen. Stuff like that soon goes missing around here in England. Sad but true. Just another reason to love France.

Certainly where we lived in England if we had left these plants out they would have either been stolen or more likely vandalised and destroyed. Here I am not worried about them while we are in residence. There was a time when I would not have been worried about them if we were away either, but since we had our stone ball stolen last autumn, presumably by someone with an eye for a little pocket money from architectural salvage, I am no longer so sure. The likelihood is that they will be fine though.