Cycling from London to Paris for Charity

Cycling from London to Paris is a popular way to raise money for charity. My friend Peter did just this over the May Day weekend. I mentioned it a few days ago and there were several comments from readers, so now I have a photo from Peter and a link to the website so you can make a donation if you wish. The charity in this case is the Shooting Star Children's Hospice, based in Surrey, which provides respite, palliative and specialist end of life care for children and their families, free of charge, and mostly funded by donations. 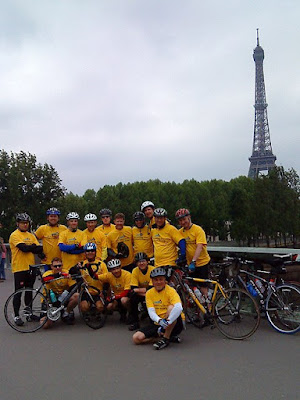 Peter says: '[The] Picture ... [shows the] Eiffel Tower and the gang wearing charity T shirts which we put on for the last 12 miles into Paris.

Thank you so much for the publicity. The donation site is here ( one of a number available). This should give information on the charity. It would be good if anyone kind enough to contribute could leave a message for me, to identify them from friends of Roy and I will do my best to send a thank you.

The comments are amusing and I like the stats puns. The common link between stats, bikes and guitars is of course 'cycles' as stato's study cycles in time series and cycles are a part of the wave forms which form when a stretched string is plucked.

I did make it to Paris, by Sunday, with a group of 14 other riders and John our superbly helpful van driver, generally 20 years younger and very fit and strong so I was pleased to hang in there, the pace was testing. I managed to stay on the bike which was more than many could say but no broken bones and Paris was beautiful on Monday morning.'

Peter is the chap on the far right of the photo, by the way.

It must be nice once they get to France and have a chance to dry off.

Now that's an achievement;Congrats to Peter and his gang !

( Simon & Susan- I've been on "congé" with D. this week & pretty much out of the blogs.But, we shall be catching up & yes, following your move).