Diane de Poitiers was born in late 1499 or early 1500, the daughter of Jean de Poitiers and his wife Jeanne de Batarnay. Her mother was the daughter and only surviving child of Imbert de Batarnay, the remarkable negotiator and diplomat who served four French kings. She was born in the Dauphiné in the south-east of France, where her father held territory. For more than twenty years she was the mistress of Henri II, King of France. Clever and well educated, with a head for business and politics, she strongly influenced the king. She was clearly his soulmate, despite the twenty year gap in their ages.


The tomb of Imbert de Batarnay. He is the effigy in the foreground. 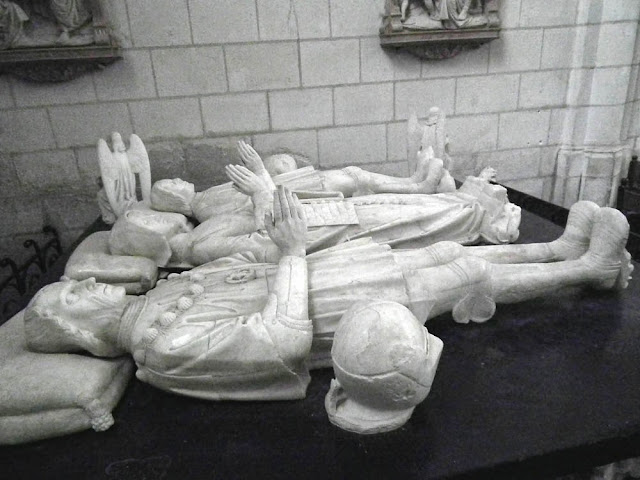 Her family operated in the most intimate royal circles. Her paternal grandfather had married the illegitimate daughter of Louis XI. In medieval times illegitimate children of noblemen were acknowledged openly and shared all the privileges of their legitimate half siblings.


Diane de Poitiers, portrayed as Diana the Huntress by Francesco Primaticcio. She is also discreetly exposing one breast, telling you she is the King's mistress, and her hair is bleached blond. 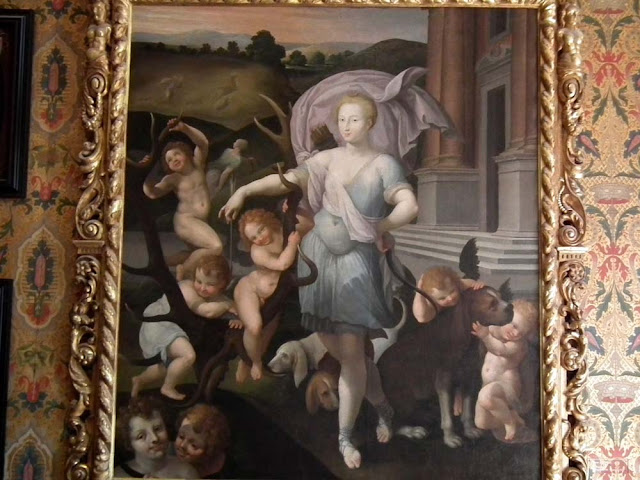 Diane's mother died  when she was six years old and she went to live in the household of the formidable Anne de Beaujeu, daughter of Louis XI and regent of France in the early years of her brother Charles VIII's reign. At the age of fifteen she was married to Louis de Brézé, the grandson of Charles VII and Agnès Sorel. He was nearly forty years her senior, and she gave him two daughters. It seems to have been a successful union, despite the age difference.

In 1524 Diane's father and Anne de Beaujeu's brother-in-law were accused of treason, and Jean de Poitiers became the principal scapegoat of the affair. He was only saved from the scaffold by her intervention and reminding the king of her husband's loyal service. Louis de Brézé had in fact been the person who alerted the king to the plot. I think it is likely that Diane inherited her maternal grandfather's diplomatic skills and political savvy. Nevertheless, the affair was serious enough that her father spent the rest of his life imprisoned, in the chateau-fort of Loches (in some comfort, it has to be said...).


Jean de Poitiers was imprisoned in the tower on the right. 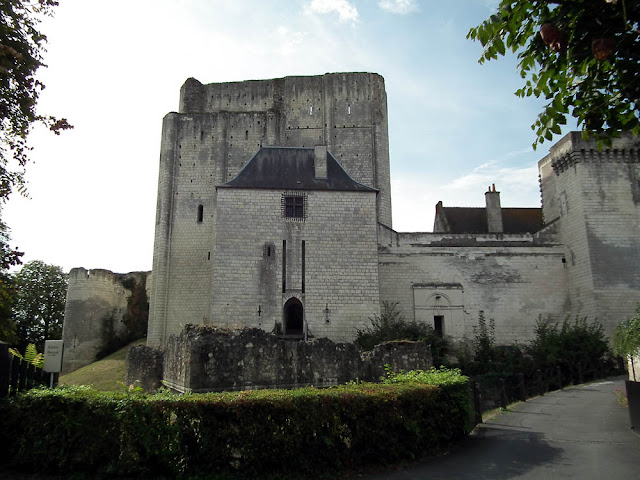 Diane served as lady in waiting to François' queen, Claude, then when she died, the king's mother Louise of Savoie, then finally to his second wife, the Hapsburg Eleanore of Austria. It is during this time that some biographers claim that she became the mistress of François I, but there is no real evidence of this and I am inclined to think she managed to keep herself free of the lecherous king's clutches.

Louis de Brézé died in 1531 and Diane adopted the garb of a widow from that time on. I suspect that the combination of black and white with gold stripes suited her and gave her a defined style and elegance that people remarked upon. Later, Henri II was to adopt the same colour scheme for his household livery. She also took the opportunity to gain control of Louis' lands and titles in her own right, and to manage them on behalf of their daughters. François I was clearly benignly disposed to her as he granted her the letters patent to achieve her goals and giving her the right to the income from her daughters' inheritance.

The battle of Pavia in 1525 had been a humiliating defeat for François, and he had to send his two young sons as hostages to Charles V, King of Spain and Holy Roman Emperor. Prince Henri was seven at the time, and they were accompanied to the border with Spain by their grandmother Louise of Savoie. In the absence of their dead mother, Diane, one of Louise's ladies in waiting, kissed the young prince farewell. The boys were prisonners for four long years, held in isolation and uncertain of what the future would bring. Henri immersed himself in chivalric stories and in his fantasy world Diane was cast as la dame par excellence. When he was finally returned to the French court, his father put Diane in charge of his education, and during the celebratory games when François married Eleanore of Austria, Henri saluted not his new stepmother from the jousting lists, but Diane.

Henri, Duke of Orléans, as he was then, married Catherine de Medici in 1533. Diane approved of the match and had promoted the idea, despite Catherine being considered 'trade' by many at the French court. Catherine's mother was French and she and Diane were in fact cousins. The young royal couple did not produce the expected string of heirs and Diane was on hand to advise. Despite ensuring that Henri spent sufficient nights in his wife's bed, it seems likely that Diane and Henri became lovers around 1538.

When in 1547 Henri became king, Diane was showered with gifts, including the crown jewels and the chateau of Chenonceau. He took as his personal symbol the crescent, the symbol of Diana the Huntress, and he used it everywhere. It's difficult to tell if their relationship was sexual or not, but certainly she was his friend and confidante, and was his 'lady' in the chivalric sense.

The queen Catherine resented Diane deeply, but while Henri was alive had to keep her feelings in check. Diane was one of her ladies in waiting, and served her during the birth of all of her children. It was Diane who occupied herself with the matters of the royal children's education, nourishment and living quarters. She also made sure Henri slept with his wife often enough that she produced ten children in twelve years. During his reign there was a lot of comment on the fact that his monogram of two interlaced Cs back to back over an H looked more like two Ds and an H. Catherine reclaimed and reworked it after his death, making sure the ends of the Cs went beyond the uprights of the H so it was more clearly two Cs.

Ambassadors visiting the French court report that every evening after an ambassadorial meal the king would repair to Diane's chamber to talk over the day's events with her. It is always assumed that she advised the king, probably wisely, during these sessions, and therefore had considerable influence at court. However, there is no record whatsoever of the conversations that took place between them and no real proof of her affecting the king's decisions or the course of events (except that certain members of her family rose to high office). For modern romantics it can be very easy to over estimate the influence of Diane and under estimate the influence of the Constable of France, Anne de Montmorency.

However, the rise of the hardline Catholic Guise family was assisted by Diane's position and her daughter's marriage into the family. Montmorency did his best to mitigate Diane's influence, ensuring for example that the king was encouraged to spend time with another woman during a period when Diane was absent from court while a broken leg caused by a fall from a horse healed. But as the Guise family became more and more powerful Diane and Montmorency put their rivalry for the king's attention aside in order to make sure the Guises did not gain too much control.

Diane was a significant patron of the arts and commissioned many works from painters, sculptors and architects. She also supported the Italian goldsmith Cellini and the poet Ronsard.


The Chateau of Chenonceau.
Diane added the bridge from the back of the chateau to the southern bank of the Cher. 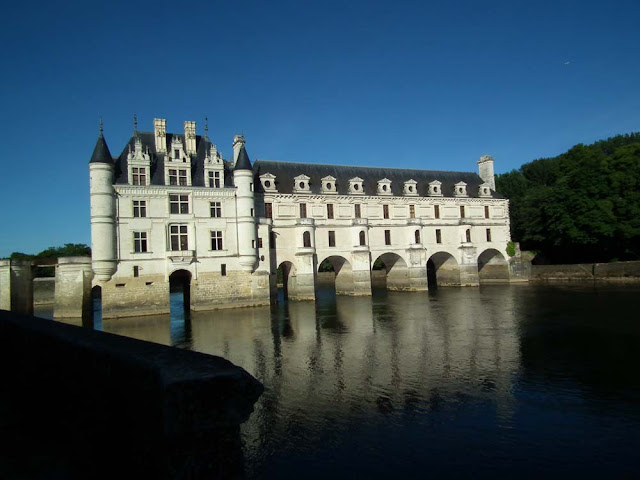 When king Henri II was mortally wounded in 1559 she refrained from exposing herself to the possible humiliation of being barred from his sickroom, by simply not visiting. She was barred from attending the funeral. When he died she returned the crown jewels to the new king, as was customary.  By the end of the year Catherine de Medici had forced her to accept the chateau of Chaumont in exchange for Chenonceau, but surprisingly, Diane was left with the majority of her assets intact. She very sensibly retired to her chateau of Anet in the north and lived in obscurity until her death in 1566. 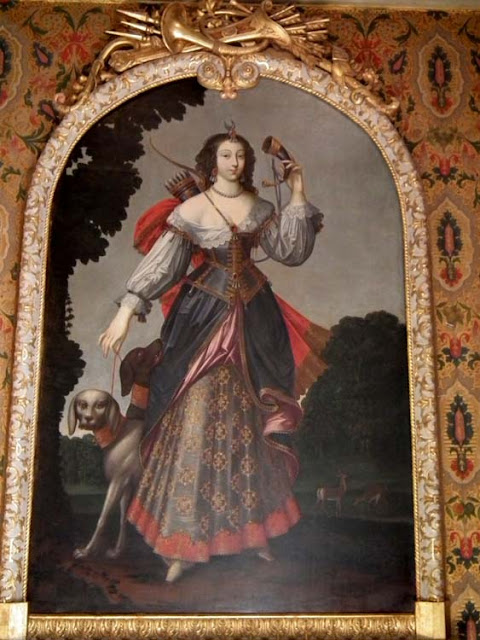 In 2008 her remains were forensically examined and it was discovered that she had an unusually high concentration of gold in her bones. It is believed that this was caused by her drinking colloidal gold as an elixir of youth and to maintain her extremely pale skin.

In my opinion one of her most important legacies was as the creator of a new ideal of womanhood. In medieval times women were expected to aspire to be like the Madonna. They were encouraged to cultivate traits such as obedience and piety and concentrate on their maternal and domestic duties. But by the late 15th century young aristocratic and middle class girls were being educated as well as their brothers. Clever, capable women like Diane wanted more, and she adopted an alter-ego of Diana the Huntress. This allowed her to demonstrate much more challenging traits such as independence, intelligence, sportiness and most interesting of all, the power to choose who she slept with and when. This last quality is associated with the legend of Acteon and Diana, where the goddess transforms a peeping Tom into a stag and hunts him down. Young women were attracted in droves to this new ideal of womanhood, and many copied Diane's habit of having herself portrayed as Diane chasseresse.

*When I first saw this painting the woman was identified as Gabrielle d'Estrées, the mistress of Henri IV. Then the identification was changed to Laure Victoire Mancini, the second Duchess of Vendôme. Now she's unidentified. I wouldn't mind betting that it is Diane herself. I always doubted the identification as Laure Mancini, as I think the slight dip in the neckline is an extra subtle way of telling us she is somebody's mistress. Laure Mancini died very young in childbirth and as far as I know was sincerely attached to her husband (or at least, continually pregnant from the age of 18 to 21).

Fascinating post, Susan. One can only imagine the effort it must
have taken to keep all those relationships balanced to her advantage. And all without a single "tweet."

But plenty of teenaged boys to carry messages...