As well as the deer I posted last week my sister Kathy also photographed a European Pine Marten Martes martes (Fr. Martre des pins) in the Forest de Preuilly in June. I cannot tell you how extremely green with envy I was! This is an animal one only gets a fleeting glimpse of, and not very often, even though it is common here. Mostly you see them as roadkill, and my best ever view of one was as it dashed across the road in front of me when I was driving between Châtillon sur Indre and Azay le Ferron last year (making it to the other side fine -- I did not squash it, thank goodness). 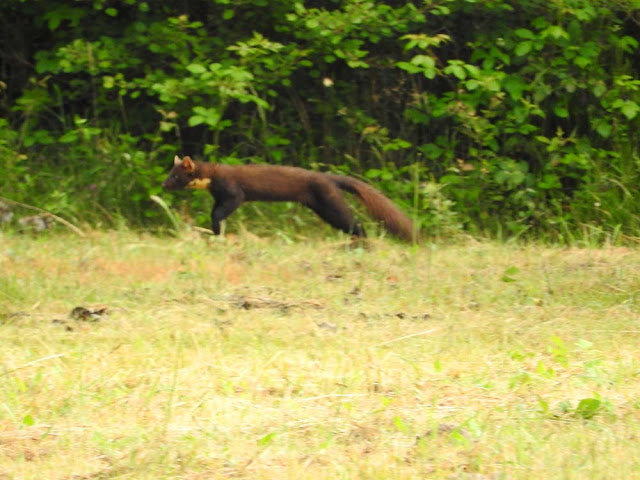 In medieval times Pine Marten pelts were widely used to line garments for warmth and if you see a portrait of some medieval dude wearing dark fur it is quite likely to be Pine Marten. The fur was valuable right into the 19th century and according to an 18th century account '[has] no strong disagreeable scent, like the polecat, weasel, and other stinking animals of a similar nature...I caught several one winter...and sold their skins...for the sake of the fur, which is exceedingly good.' The fur is also used to make artists brushes even today.

Pine Martens are mustelids, related to otters, weasels, stoats, sables, mink and ferrets. They are about the size of a cat and extremely agile, wary and alert. They greatly resemble the Beech Marten Martes foina (Fr. Fouine), but once you know what to look for, are reasonably easy to distinguish. Pine Martens are a rich dark brown with a creamy yellow bib that does not divide and extend down their front legs. Beech Martens are a duller brown, with a white bib that divides. 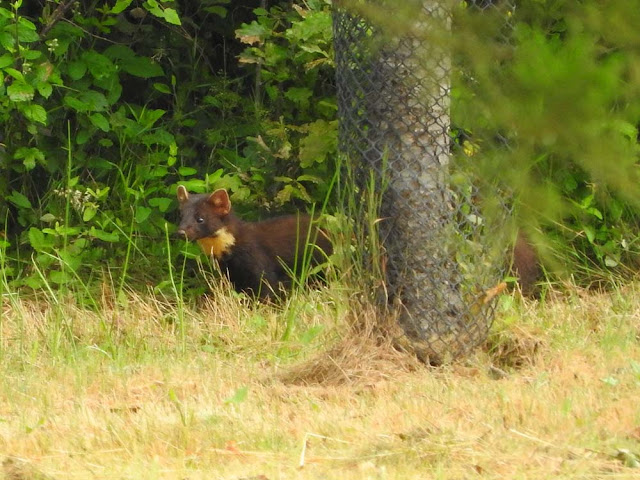 Pine Martens live in mixed or coniferous woodland, bounding across the ground and climbing and leaping with ease. Despite the fact that they are less likely to be near human habitation they are more frequently seen than Beech Martens. They are nocturnal but can be spotted at dusk or even during the day. The species occurs throughout France and females require about 30 hectares of territory. Males roam more widely.

These carnivorous predators eat small mammals, birds and insects, but they are also quite partial to wild fruits such as rosehips, strawberries and raspberries. Small rodents form about 80% of their total diet, mainly voles, field mice and shrews. They love eggs, but because they are forest creatures and wary of man, they do not raid chook sheds like their cousin the Beech Marten. In season fruit can form up to 70% of their diet. They will not turn down a carcass such as a deer killed by a bigger predator if they come across one either.

Sadly the population of these charming animals is in decline. The causes are multiple, with the long centuries of hunting not helping. They are officially classed as vermin in much of  France and in Indre et Loire it is permitted to trap and kill them all year (they can also be shot in the early spring if you have a licence to do so). The fragmentation of woodland, loss of wooded corridors, deforestation and intensive forestry management techniques will disrupt populations and cause a decline in numbers. Finally, roadkill is not an insignificant contributor to the losses.

Further reading: The French Wikipedia entry for Pine Marten, which has a very interesting section on a technique for monitoring their population. It involves plumbers pipe, chicken wings and a reliance on Pine Martens being more agile than any of the other carnivores around.

I know it is difficult to judge scale in these pics, but I'd assumed (in my ignorance!) that they are much smaller,more like a squirrel.

I'm always surprised by how large they are when I see them. They are in fact twice the size of a squirrel and only slightly smaller than a cat.

Great pix... please make sure the sighting is logged on Faune Touraine... with the bottom picture, it shows the brown nose as well as the cream... the Fouine has a dirty-pink nose!
The male has, on average, a territory of around 80 sq.kilometres...
overlapping many females' territories!!
Unfortunately, it is the males that get killed on the road more frequently... like the lovely male that was killed just down the road.

I saw a pair of pine martens a month or two ago. They appeared to me to be at least as big a Bertie the black cat -- longer, and with a much bushier tail. Bertie weighs in a 6 kilograms. I've also glimpsed another marten, at least I think that's what it is, twice out in the vineyard over the past two weeks, on my morning walks.

Yes, their proportions are different to a cat's. Only half the height of a cat at the shoulder (much shorter legs), but about the same length of body and tail. A big marten would only weigh about a third of a good sized cat. You are lucky to see them, and early morning seems to be a good time for catching a glimpse of this elusive animal. Note to self: get up earlier :-)