A mother and baby Pipistrelle on a towel.

Roger got a shock recently when he swung a normally unused shutter at his place and discovered a maternity roost of Pipistrelle bats Pipistrellus sp (Fr. Pipistrelles). He quickly snapped the photo below, but only succeeded in getting the few slower reacting individuals still clinging to the wall.


A Pipistrelle maternity roost on a wall behind a shutter.

Elizabeth was delighted to return home one day recently and find this Geoffroy's Bat Myotis emarginatus (Fr. Murin à oreilles échancrées) installed under the roof of her porch. The little guy was kindly identified by Virginie Culicchi, our local bat expert. She says this is a typical place to find Geoffroy's Bat in the summer time. Unfortunately when I visited a few days later, it had gone, after roosting there for several days in a row, so I don't have photos of my own.


Geoffroy's Bat roosting under a porch.

The photo below of a Greater Horseshoe Bat Rhinolophus ferrumequinum (Fr. Grand Rhinolophe) was taken in the cellar of a local privately owned chateau whilst conducting the summer survey of bats in the southern Touraine in late June. Virginie has asked me to point out that the bat knew we were there and has drawn itself up, a subtle sign of a little stress caused by our presence. This is almost inevitable when surveying in the summer, because the bats are not in torpor like they would be in winter. Ideally, a resting Greater Horseshoe should look like the one in this post, hanging from fully extended legs.

At the same chateau we encountered a maternity roost of Lesser Horseshoe Bat Rhinolophus hipposideros (Fr. Petit Rhinolophe) in a disused bathroom. We were expecting to find them, as during the winter survey there was plenty of evidence of their previous occupation of the space.


As part of the summer bat survey in June we went up three church belfries. After all, that's where you would expect to find bats, n'est-ce pas? Sadly, not. Unfortunately all the nesting pigeons disturb them and they have abandoned the belfries for barns and quiet domestic dwellings. And let me tell you, belfries are disgusting places, full of pigeon poo, dust, dead pigeons, spider webs and all manner of unidentifiable crud. I was convinced I would end the day with psittacosis at the very least. 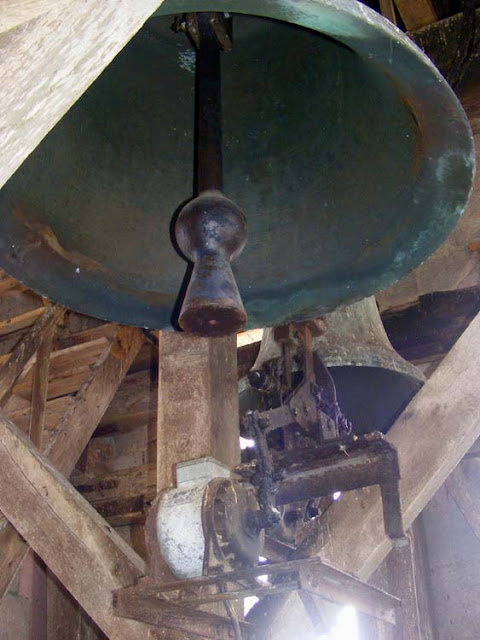 Climbing the belfry in the church at Charnizay. Jean-Claude's legs on the left, my sister Kathy below. 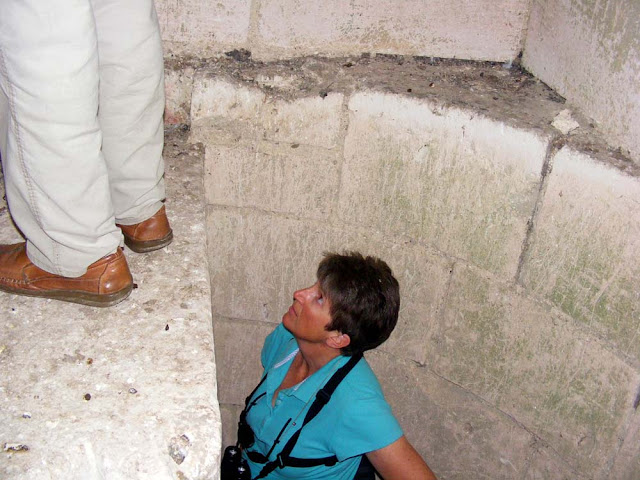 A bat at the bottom of a vault rib in a 16th century building. Do you know where? 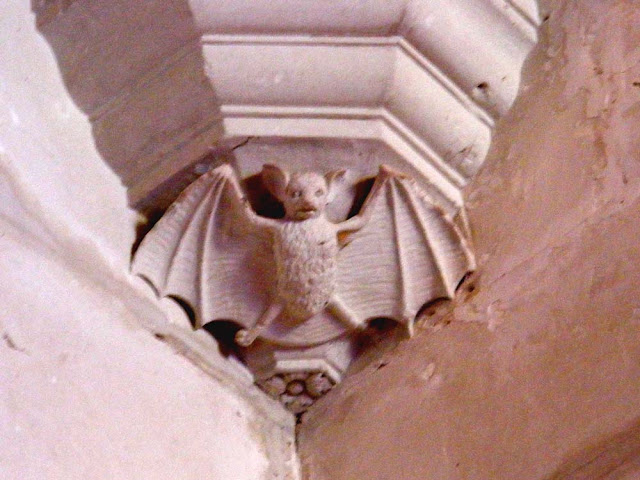 Email ThisBlogThis!Share to TwitterShare to FacebookShare to Pinterest
Labels: Churches, nature and wildlife, Pictures of Chateaux