Recently I was taken to some woodland on a limestone ridge overlooking the Gartempe river. Nothing unusual there. I'm frequently to be found exploring such sites, either alone or in the company of friends who are experts in some aspect of the natural and cultural history of the Touraine. In this case the site we encountered was intriguing, but none of us had the expertise to explain it.


The stone would have been relatively easy to extract. 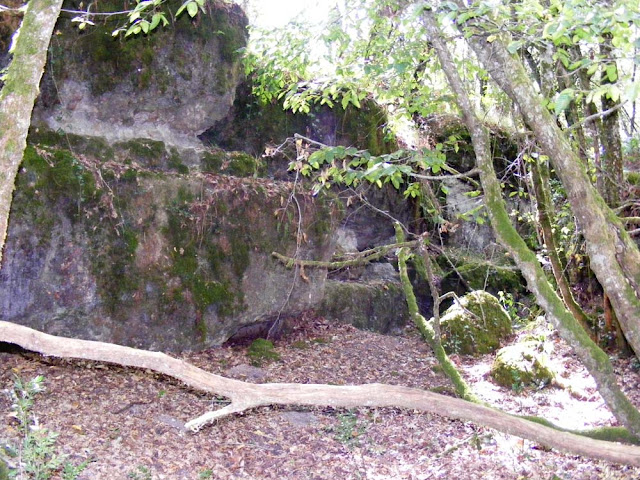 On the summit of the ridge there was exposed limestone and evidence of a quarry. Nothing unusual there either. These small quarries exist all over the place and can date from just about any time in the past.

What caught my attention was the horizontal channel cut into the limestone face. Obviously a seam of flint had been extracted, whereas much of the limestone had been left in situ. Naturally when one thinks of flint extraction in the Touraine one automatically thinks of the prehistoric. But something about this site made me wonder if it could have been later, and if so who would have been using flint other than Stone Age man.


Exposed limestone with evidence of quarrying and blocks being removed. 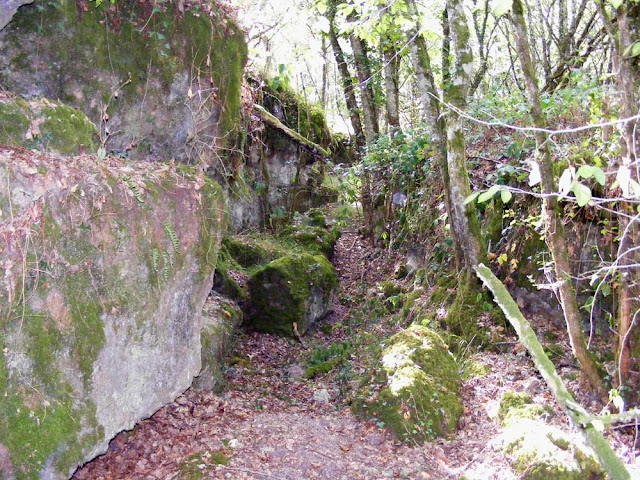 Once I started thinking about it and doing a few internet searches a possible answer appeared -- gunflint, for flintlock firearms in the 17th, 18th and early 19th centuries. Gunflint apparently needs to be hard black flint and in the field below this quarry we had found a lot of pieces of black flint, which is a little bit unusual for this area. But was it the right quality for gunflint? I don't know, but it made me wonder -- was this a gunflint quarry?

When the flintlock firearm mechanism was invented in the early 17th century it didn't take long for it to become widely used and all the old known prehistoric sites were scrutinised for any remaining useful seams of flint. During the Napoleonic Wars the Touraine became the principle producer of gunflint for the French army and it was an important cottage industry. Flint mining and knapping was undertaken in the winter, when there was less to do in the fields.


The channel where the seam of flint would have been is clear in this photo. 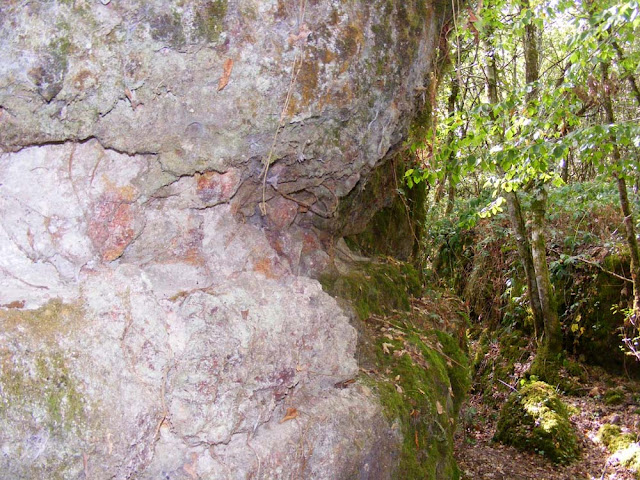 Further Reading: A post about central France (Indre, Indre et Loire and Loir et Cher) as the centre of the French prehistoric flint tool and later gunflint production on the Ohio History Connection Archaeology Blog. French gunflints have been found all over the world. And it turns out that whilst British gunflint is black, French gunflint was more highly regarded, and not black. It seems that you can even still buy French gunflints, to make your reenactment events even more authentic.

I was wondering why you said that gunflint had to be black?
As you found out, it doesn't....
BUT... There are another two reasons for flint extraction that are still fairly recent...
The threshing boards as displayed in the Museum at Grand Pressigny...in use up to the Great War...these used both mined and field-found flint...and chips from the gunflint industry.
The other, and most likely locally, is decorative flint for building....field-found flint is useless for this as it has a been weakened by freeze-thaw.... The area of the Brecks around Grime's Graves was famous for flint, long after the prehistoric pits were dug...
Mainly for the famous Norfolk "brick & flint" facings, but also for gunflints....
There are places in Norfolk...Blickling for example....where different colour flints have been used together.
Prior to WW1....flint was big!!

I thought about architectural uses, but it doesn't seem to have been a big thing here. I can only think of a few examples, where livre de beurre have been used embedded in the render in a pattern. Lumps of unworked flint are sometimes used in the lower courses of buildings because they are hard, but they aren't intended decoratively. Can you point me to any decorative flint work in the Touraine? Maybe I just haven't noticed it.

The other use, for the threshing boards, I didn't think of because I didn't realise they were used for so long. I think that is a real possibility given the location. Does that mean that if you are field walking or find a flint tool close to habitation you need to be careful not to mistake a modern flint blade for a threshing board for something prehistoric?

I think if they were using it for building they would have taken the limestone too. My best guess is gunflint because it was apparently a very significant activity here.

It needen't have been used architecturally around here... it just needed to be attractive, easily workable flint....
flints have been used as decoration in many places...
Grime's Graves, for example, exported faced flints to Holland and Belgium. Local use... I honestly haven't really looked... having been exposed to it so much in Norfolk, I think I am a bit immune to it!!

Yes, is the answer to field walking... but, it isn't very difficult, the flints used for the boards is really just chips, unworked, possibly worn on one edge through use.
A real tool, even from a "dechet" from a "grand lame"... will show deliberate smoothing by flaking on one side/edge/both to enable holding without discomfort or harm...it will, if well used, show a patina where hands with clay dust have polished the flint... it may, or may not, show secondary working to create a blade "shape" or a burin, etcetera.
A flint knapper in prehistoric times was working with a precious substance... every little bit was of use by somebody... the scrap piles would have been scavenged... it cost the knapper a lot of hard work to extract workable flint!

Are you certain, however, that the limestone wasn't taken?
That groove looks frightfully shallow for good quality flint to have been extracted... flint formed flat in the main, not often vertically... and small chunks are certainly left in the face if a big enough slab had been extracted before it broke... was there any evidence of that?
NB: If you look at the display in the G.P. Museum about the distribution of flint, you will see that black, toffee, and a multicolour [red&cream], types of flint occured in this area... in the Thetford area, flint goes from black to gunmetal grey over quite a short distance.

I'm sure some limestone was taken, but there appears to be useable limestone that wasn't as well.

Limestone around here is as common as muck... it seems to be taken from near the point of use [if of the right quality]....
good, sound flint is rare... even underground, faults occur...nodules form, etc. A chunk of flint for working must ring like a bell when struck... same as telling whether or not your porcelain bowl... that you were about to bid for... has a crack.
No crack, ping....cracked, dunk!