Recently we were invited to go archaeological field walking. It wasn't a formal thing. The field in question is not the subject of an archaeological dig, but it is known to certain local amateur archaeologists as somewhere that small artefacts regularly appear.

The field has been deep ploughed for many decades, so there is no archaeological context, and it isn't even clear if the potsherds and metal objects that are found actually originate here. It is possible they have been brought in with muck from somewhere else and scattered over the site.


Has he found a potsherd? 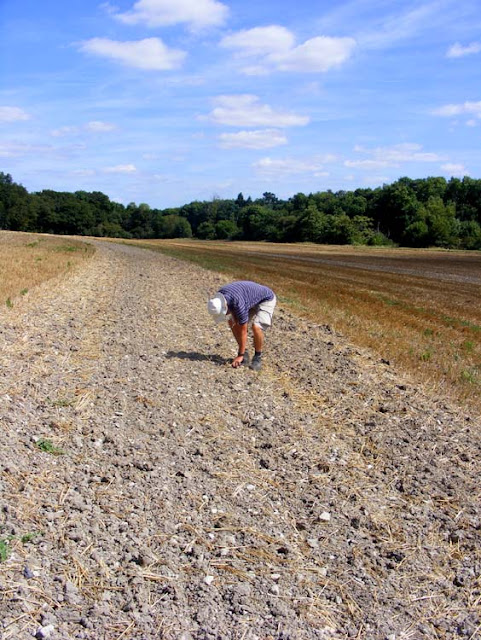 The location was lovely, a long narrow ploughed wheat field, on a gentle slope stretching between the Gartempe river and a wooded limestone ridge. The lower part of the field, along the river, was very sandy. My theory is that it is the eroded sand from a sandstone cap on the limestone ridge that has washed down. Simon's theory is that it is alluvial and the river has changed path. The upper part of the field is typical clay and chalk. It felt rather remote, on the end of a farm track that didn't go any further, but just the other side of the river people were out on their jetties and enjoying their riverside terrains de loisirs.

The friend who invited us would like to think there was a Gallo-Roman villa on the site. Unfortunately the artefacts that come off the site are always very damaged by the plough and never very big or concentrated. The plough cuts pieces of pottery into sherds only a few centimetres across.


Our finds: the sherds on the left and top have a black glaze inside; centre left is a fine rim; bottom is a white glazed coarse rim; the top two are from pot bases; at right a handle where it joins the body of the pot; centre right the side of a fine pot. 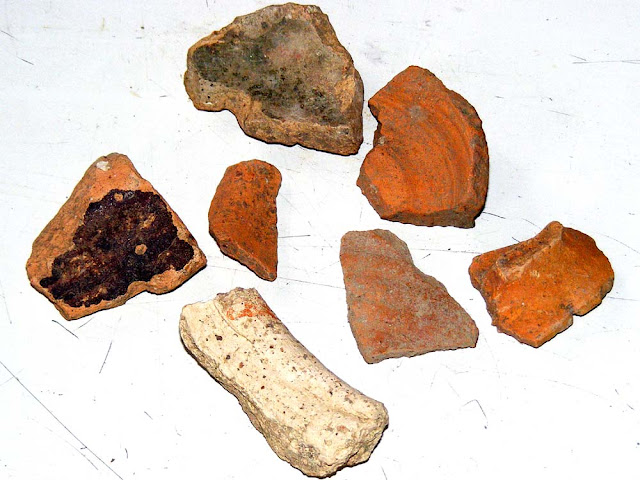 Nevertheless we found some pieces that were clearly parts of rims, bases and handles. One or two pieces had simple black or white glaze. You could see the concentric rings from throwing or coiling. Our little collection will be treasured and put on display along with our prehistoric slag from the iron working in the Forest of Preuilly, some flint tool making offcuts, fossils and handmade nails -- all testament to the rich history of this area.

Simon found a terrific website for identifying or categorising pottery sherds, but to be honest, neither of us has the dedication to trawl through it and put a name to the pieces we found. A cursory look reveals that the sherd with the black glaze on the inside could be Central Gaulish Black-slipped Ware.
Posted by Susan at 09:00

Hi Susan, curious wether you have been able to identify the pieces of pottery?
thanks

No. Dinner with Philippe didn't come off as he wasn't feeling well. Rescheduled for this coming Saturday. I'll take the pieces for him to look at and comment on.