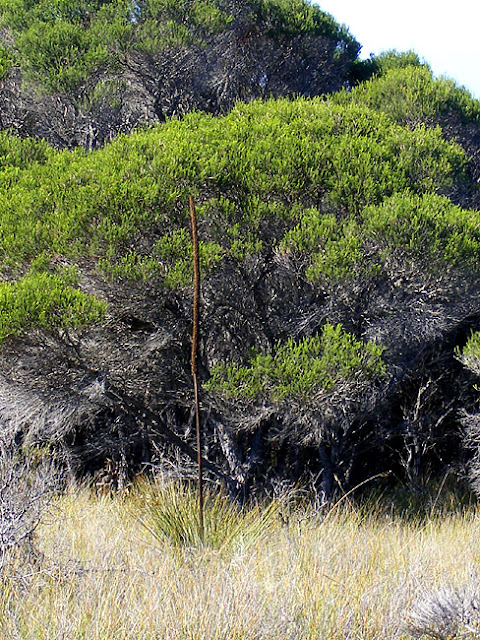 The Spear Grasstree Xanthorrhoea resinosa is one of a genus with about 30 species, all endemic to Australia. This one doesn't look particularly tree-like as it is one of the shorter species that doesn't form a trunk of any height. Both its genus and species name refer to the fact that the plant is a source of a yellow resin, which was used as a glue by the Aborigines when making spears, and patching water containers and didgeridoos. Later it was used by European settlers as incense and in varnish.

Grasstrees are very slow growing and although they germinate easily from seed are very often taken from the wild (removed under contract from areas being developed, where the plants would otherwise be destroyed). Garden centres will charge a considerable amount for a mature grasstree but their survival rate is poor in gardens if taken from the wild.

The leaves are grass-like and form a mop shaped crown. A flower spike emerges from the centre and the woody spike persists long after the flowers are gone. The cream coloured flowers are full of nectar and very attractive to insects. Many species are triggered to flower by the smoke from bushfires.

Our posts on Sunday are all about Australia. To read more of them, click here.

In fact, what looks like a slender trunk is the flower spike long after flowering has gone. In a way, the adult tree makes me think of the California desert's Joshua tree.

Yes the long pole like bit is the residual flower spike.