I Bet They Are Delicious...

While my sister Kathy and her husband John were here in June we went to Lake Blizon in the Brenne to do the walk along the lake edge and check out the birds and other nature. We ran into a young French wildlife photographer, Charles Cherrier, visiting from the Lyon area, and he pointed out the Louisiana Crawfish Procambarus clarkii (Fr. écrevisse de Louisiane) that had become trapped in the étang (lake) overflow. He said their introduction to the lake has been a disaster. They are a top level predator and eat everything, including the native crayfish.

He laughed when I suggested we solve the problem by eating them. Frankly I'm amazed that he, as a Frenchman, hadn't already thought of it, but maybe the idea fell outside of what is traditional, so wouldn't take off (like goat meat).

Silhouetted against the habitat. 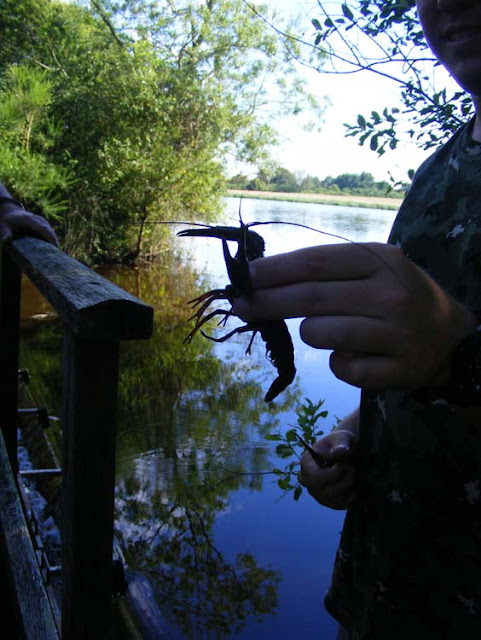 Louisiana Crawfish is a freshwater crayfish native to Mexico and the south-east of the United States. As its English name suggests, it is abundant in Louisiana. It is the most adaptable of all the crayfish species, and as such has become the most widely distributed species globally.

Unlike the native European species, it is able to tolerate periods of dry, for four months or more, and stagnant, brackish or dirty water. As a result it is able to colonise a great variety of habitats, including underground, damp grassland, seasonally flooded land, marshes, swamps, lakes and permanent water courses. 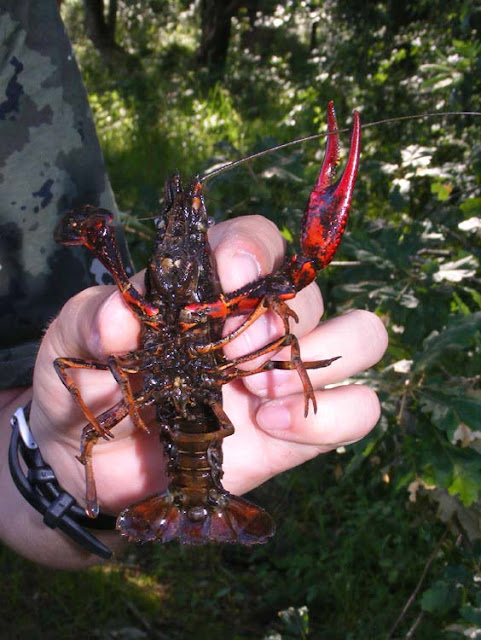 It is easily recognised by the red spots on its claws and body. They grow to about 12 cm long, with claws about the same length. By six months old they weigh 50 grams and can live six years in the wild. The population can disperse quite quickly from an intitial point of introduction, with individuals able to travel four kilometres overnight.

Although they are carnivores by preference, they eat a lot of decaying vegetable matter because it is easier to catch. When they hunt live prey they concentrate on species with relatively slow reactions, such as tadpoles, dragonfly and mayfly larvae, and snails, rather than fish and mosquito larvae which have lightning fast reactions. Louisiana Crawfish are also quite happy to be cannibals. 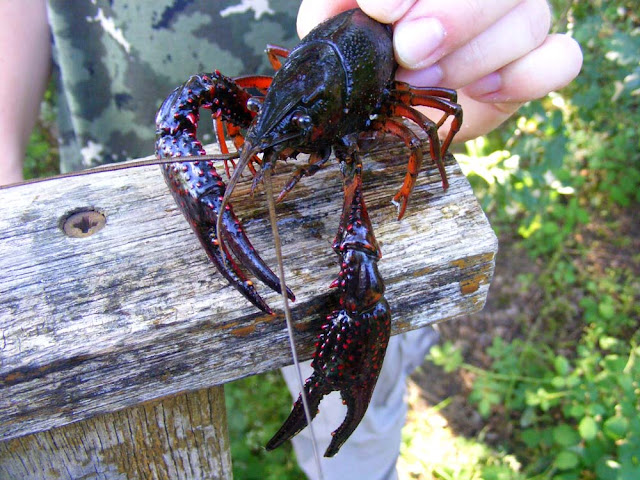 Their habit of swarming contributes to the turbidity of the water, and within ten years of arriving at a site, 99% of the aquatic vegetation will have gone, 70% of the insect larvae and molluscs and more than 80% of the amphibians.

In the US Louisiana Crawfish is by far the most common species farmed commercially for human consumption. It became the dominant species of fresh water crayfish in the world in the 1970s and 80s, after being introduced to Spain, France and Italy to be farmed, and to Kenya to control the snails which carry bilharzia. However, whilst very popular in its native Louisiana and in Cajun cuisine, it is considered by Europeans to be less flavoursome than the European native species, particularly that of the European Crayfish Astacus astacus (Fr. écrevisse à pattes rouges).


Etang overflow, where the crayfish get swept by the force of the water then trapped against the grill. 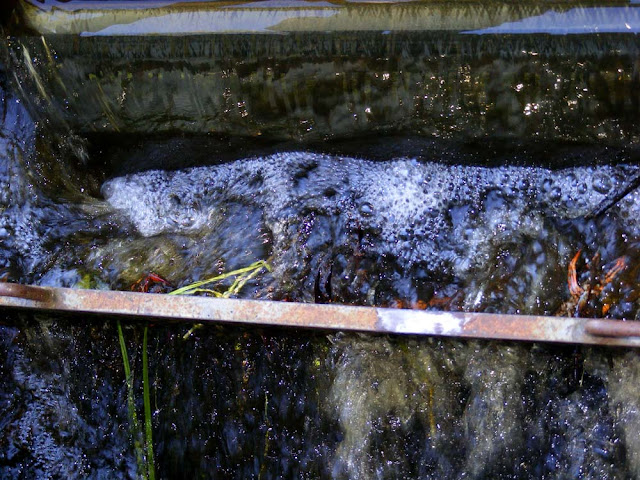 These days in Europe the Louisiana Crawfish is considered an invasive species. Aggressive and robust it reduces the quality of fresh water. Even if it does not succeed in catching and killing other invertebrate species in the water, it often inflicts wounds such as amputating the tails of tadpoles, rendering them vulnerable to later predation. The species also carries the fungal disease Crayfish Plague which has decimated the population of native crayfish, especially White-clawed Crayfish Austropotamobius pallipes (Fr. écrevisse à pattes blanches). In Poitou-Charentes to the south-west of us for example, the population of the native species has fallen 70%. In addition they dig burrows up to two metres long, degrading banks, altering drainage, making leaks in dams and irrigation channels.

In France there could be two or three tonnes of Louisiana Crawfish per hectare, despite predation by Black Kites, Grey Herons and storks (the last of which will reportedly eat so many that their feet and skin goes bright red).

To limit their further expansion of range, it is illegal to transport them live and fishing for them is very controlled. Fishermen often propagate them because they use them for bait. To kill them twist their telson (in the middle of the tail) and pull out their gut, which can impart a bitter taste to the flesh.

The only successful control measure seems to be to introduce fish species that will predate the crayfish, such as eels, burbot, perch, pike and especially largemouth bass.

Guide d'identification des écrevisse en France-métropolitaine (Crayfish in Metropolitan France Identification Guide), which gives lots of good advice (in French) about what to do once you've spotted a crayfish. It all depends on whether it is native or introduced of course, and each of the nine possible species has a description with photo. Also a description with photos of how to kill the pest species.