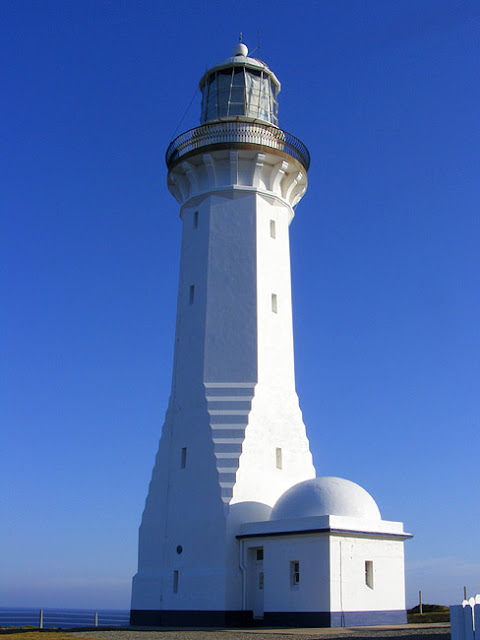 The old Green Cape Light, constructed from layers of poured concrete because it was deemed impractical to build from the soft local stone. In order to bring materials to the isolated site the building contractor first had to construct a 7 kilometre horse drawn tram line. When construction at last commenced it was discovered that the site was on a band of clay, which necessitated digging very deep foundations.

Green Cape forms the northern side of Disaster Bay. Because the shipping route hugged the coast and boats frequently foundered on the Cape, a lighthouse was installed by 1883. Boats had to keep close to the shore to avoid the strong southerly flowing current down the eastern coast of Australia. Nowadays the light is solar powered and on a modern steel tower. The old building is listed as an Engineering Heritage National Landmark. Visitors to the lighthouse can take a guided tour of the building.

Our posts on Sundays have an Australian theme. To read more click here.

Loire Valley Nature: A photograph of a Large Skipper Ochlodes venatus has been added to the species account for this zippy little butterfly.

A la cuisine hier: Aubergine, ricotta and coppa lasagne, adapted from this recipe on My Little Spoon (which despite its name, is a French language food blog). I used locally made faisselle delivered by the dairy instead of brousse. For those in Anglo countries I think ricotta would probably substitute the best for these soft fresh cheeses. I used basil rather than tarragon. The dish turned out fairly sloppy, but it was tasty. Coppa for those of you who don't know it is a type of cured pork from Corsica. It is often the cheapest sliced cured meat in the supermarket here.
Posted by Susan at 09:00

Perfect blue sky background for the sleek white architecture.
Rather reminds me of photos of Greece.
When I clicked on the Skipper, I got a 'this page does not exist'
type notice...no photo.

Sheila, the link works for me in Paris, maybe it doesn't work in Texas?

If you type this link
https://loirenature.blogspot.fr/2016/08/large-skipper-ochlodes-venatus.html
it might work?

The link didn't work but has been fixed.