On a recent walk through a field that had the remains of a wheat crop scattered across it I took the opportunity to photograph some of the so called arable weeds (Fr. plantes messicoles). My friend Ingrid who was with me at the time asked me if I was photographing plants new to me or plants I didn't already have good photos of. As it happened I had encountered these 'weeds' before, but one in particular is extremely difficult to photograph. The flowers are very delicate and fall off if you so much as touch the plant. They are also quite small and ground hugging. Photographing them required getting down on hands and knees. 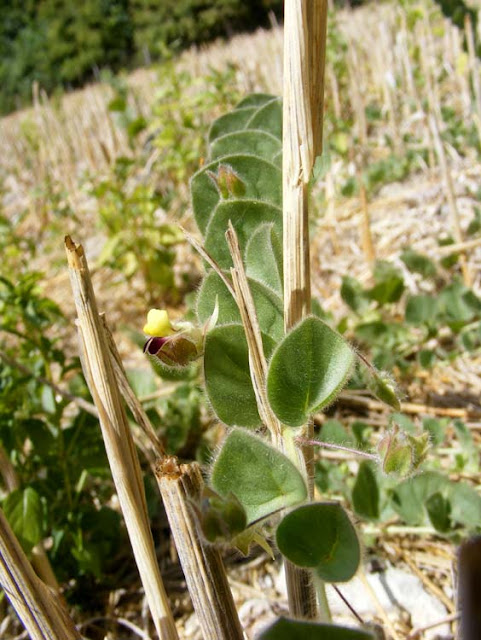 You might be able to guess by looking at the flowers that this little plant is related to toadflaxes, also 'weeds', some of which tumble over limestone walls, others which line the roadsides in autumn. And they are related to garden snapdragons, but much, much tinier. 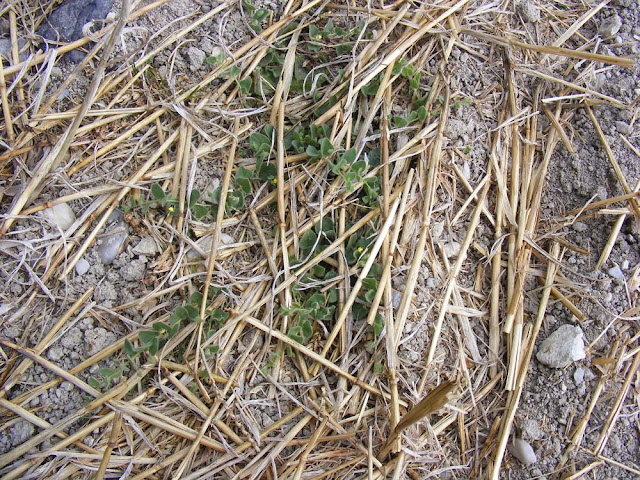 Round-leaved Fluellen Kickxia spuria has slightly sticky woolly leaves and stretches out across the chalky soil. The exquisite little yellow flowers with purple lips and a curved spur are sparsely distributed along the prostrate stems. It is an uncommon plant of calcareous arable land. Although arable weeds are in general declining due to modern farming methods, it is believed that this has never been an abundant plant and that its population is stable. In French it is known as the Fausse velvote.

This is a little known and little noticed arable weed. The most famous of the arable weeds of course is the Field Poppy Papaver rhoeas, still a common sight here (although nothing like it would have been in the past).

It is all over our potager....I regard it as a flower, rather than a weed and weed around it!
Pauline pulls them up!!

How interesting! I have never seen it except in arable fields, and even then it isn't all that common or in every field.

Susan... I only though of this after you left... when we bought the place, it was an arable field on that side!
Full of sunflower stalks... Richard sowed a grass mix on it for us... so in-Fluellen must have been in the fossil seed bank.