A Summer Day at Chenonceau

The Chateau of Chenonceau, sitting in the River Cher. 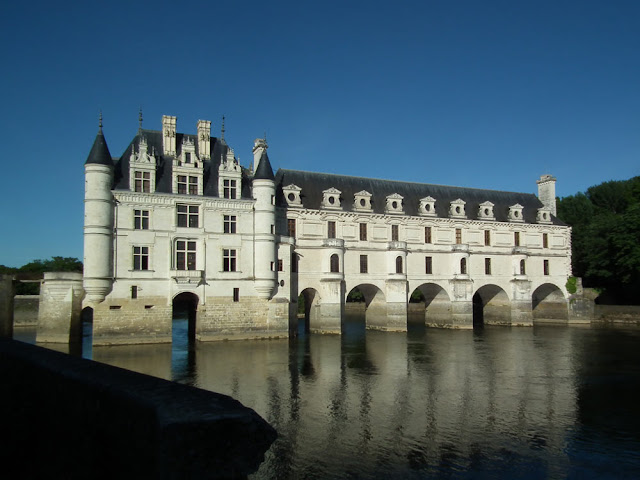 Because Thomas Bohier built his renaissance chateau on the foundations of a medieval watermill, it allowed him to site it literally in the river in this dramatic way. Later, when Diane de Poitiers added the bridge (and Catherine de Medici the gallery over the bridge) the effect was enhanced.


A bedroom in the chateau. 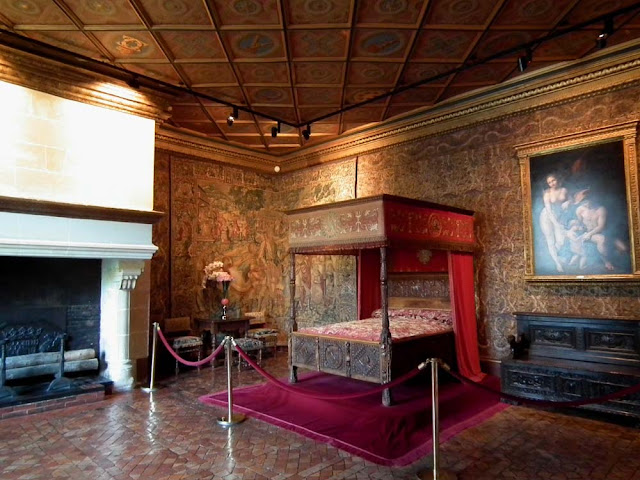 Many of the rooms in the chateau are dedicated to the major characters who lived here. This appears to me to primarily be a device to take the visitor through a series of important characters associated with the chateau, rather than based on much evidence that they actually slept in these rooms. This one is associated with Catherine de Medici. In this case it may well it have been her bedroom, but although the objects in the room are the right period and right quality, none of them have any known link to her. The fireplace and terracotta tiles on the floor are original.


Flower arrangement in the entrance hall. 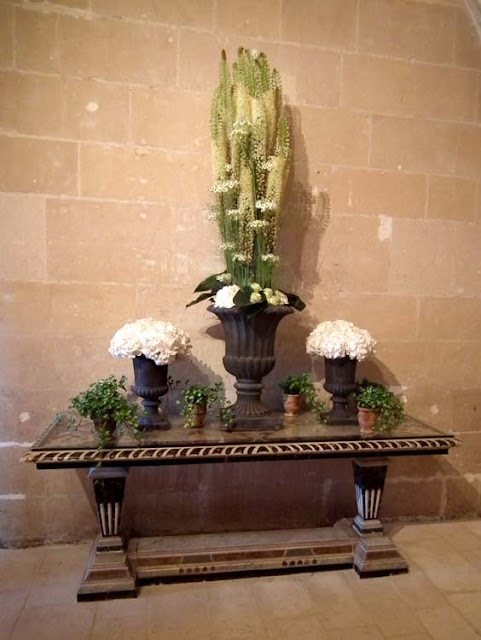 The floral arrangements at Chenonceau are endlessly creative and magnificent. I suspect this one is intended to reference fireworks. 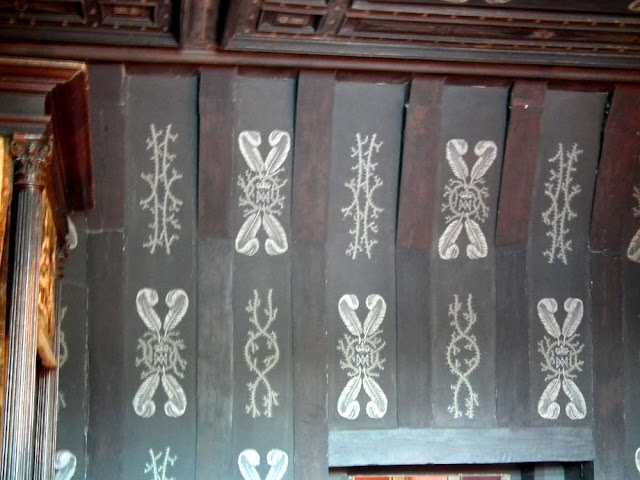 Louise of Lorraine inherited the chateau of Chenonceau from her mother-in-law Catherine de Medici. She was here when her husband Henri III was stabbed whilst sitting on the toilet at Saint-Cloud. He sent her a message saying he hoped to recover and for her to stay where she was. When he died of the wound after all she honoured his wish for her to stay at Chenonceau. The space she created to express her feelings of loss and mourning has been recreated in the chateau, using some of the original panelling. Her private apartments were demolished by 19th century owner Marguerite Wilson Pelouze, but the black and white panelling, which had been in storage since an earlier renovation, was reinstated in a highly atmospheric room in the roofspace.


Matt and Nina on the balcony. 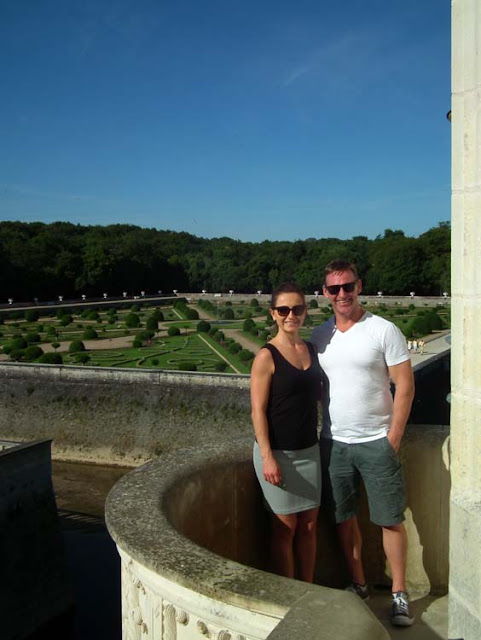 Old friend Matt and his new wife Nina visited us in early July. Chenonceau was on his bucket list, so naturally we obliged. 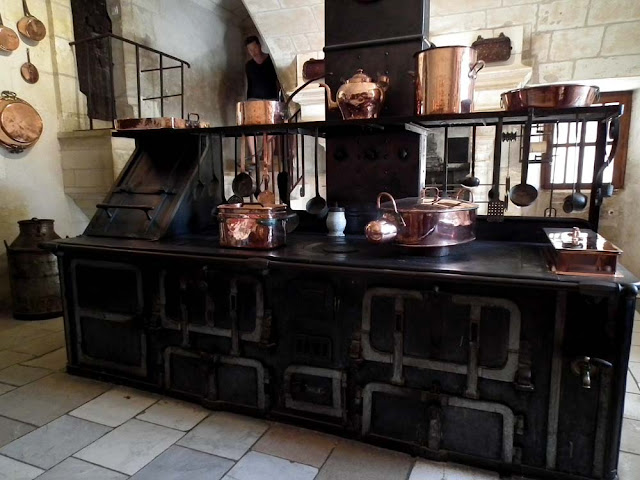 Cast iron ranges changed everything about cooking. The fuel was coal, not wood and the heat indirect, not direct. Cooks knew how to roast, boil on an open fire and bake in a bread oven. To use the new-fangled range they had to learn to bake and boil in a different way. True roasting was no longer possible, except in households that retained their spit and open fire. Firewood isn't the cleanest fuel in terms of the housekeeping required to keep ash dust from covering everything, but coal is much messier and nasty smelling, leaving everything covered in tar. On the plus side, this type of range allowed much more control and precision than the open fire once you got the hang of it and so haute cuisine was born. 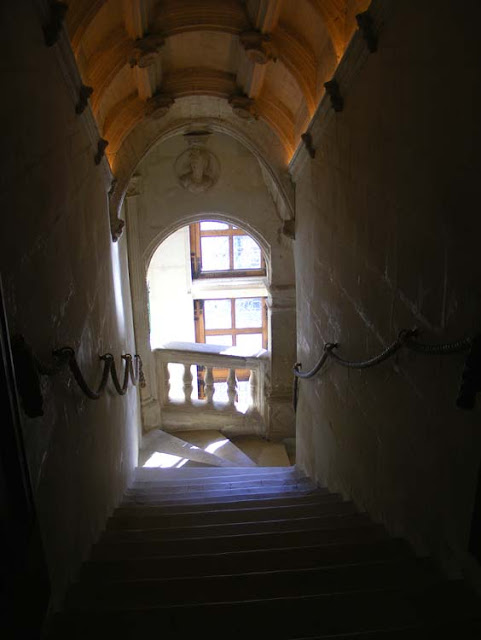 One of Chenonceau's many claims to fame is that it is one of the earliest buildings in France to have a straight ramp on ramp staircase in the middle of the building (as opposed to spiral staircases in corner towers).

Further reading: French Wikipedia entry on the Chateau of Chenonceau (which changes all the time, but contains considerably fuller detail than the English version and I find less prone to errors).


Those wondering about yesterday's challenge might find a bit of a clue in today's blog post. Or if that's still too difficult, you can just go here. I am surprised no-one guessed - it's where we seem to spend half our lives in summer. (And no-one has found Simon yet!)
Posted by Susan at 09:00

Fascinating post and lovely photos. I love the vintage range! :)

Very interesting about the straight staircase. I also didn't know the detail of Henri III's location when he died :).

That kitchen is a photographers dream!!

Not quite as dramatic and bizarre as Arius.