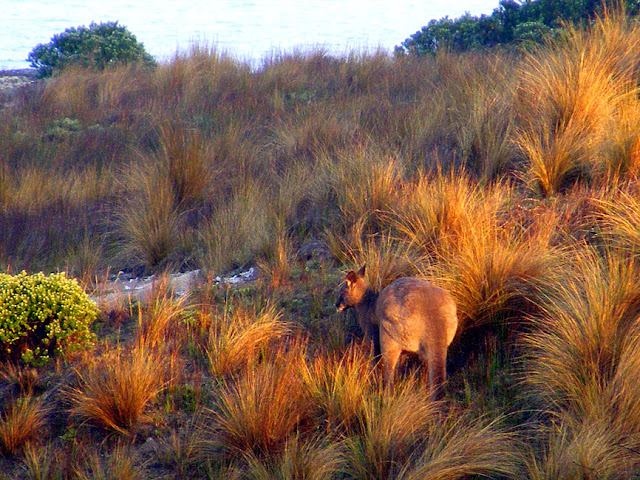 A typical female Eastern Grey Kangaroo Macropus giganteus might weigh 30kg and be capable of 50 km per hour. It's the kangaroo species you are most likely to see if you visit Australia as it lives in the bush and grassland around the major eastern and southern cities. This one is right at the coast, with the sea in the background of the photo. Eastern Greys are abundant and not endangered, having adapted well to the European colonists activities in Australia. They are usually seen, like this one, either early in the morning or in the evening when the light is failing. They are grazers, eating a variety of grasses.

Here it is for Simon... https://www.youtube.com/watch?v=M7xHyYWUxXI

Did one of you take that photo? I like it. Is there any danger involved in approaching a wild kangaroo? Does one risk bodily harm?

That is a wonderful photo.
Touching on yesterday's topic, the Telegraph cartoonist Matt has an amusing take on burkinis.

I took the photo. We never use other people's photos without crediting them. I've never felt threatened by a wild kangaroo. They are generally quite difficult to get close to. There is a small risk with male kangaroos and those that are habituated to humans. If they wanted to they could seriously injure a person with their hind feet. I notice that there have been a couple of instances this year of kangaroo attacks being reported in the news. I suspect it has to do with the increasing proximity of mobs of roos to urban areas and people not respecting wild animals as much as anything.

That's interesting. In places like Yosemite in California, people, especially children, have been killed by deer. They kick when people get too close. And the deer have lost their instinctive fear of humans in the big national parks.

Indeed, it's the habituated wild animals that often pose the greatest danger. The kangaroo in the picture above knew I was there. You can tell by the way the left ear is pointed towards me. But it would have just kept moving slowly away, keeping whatever distance it felt was safe. I would never have been able to get any closer to it and instances of kangaroos advancing and attacking are rare.

Love the light on the grasses. Beautiful. We used to get lots of Roos in our garden in Canberra and one Christmas Eve had the lovely sight of a mob hopping down the centre of our street. If approached the females and young will move first. If you make a deep coughing sound the boss will let you walk by without bothering to get up.

Good tip. I think not staring at them helps too, like most wild animals. And not speaking -- despite our instinct to say reasurring things, most wild animals are frightened by human voices.

WE have 100s here in the Central Highlands and especially in Trentham Victoria where we are building. They actually can be seen on the side of our road grazing. Today we spotted three just lazing in the sunshine and as we stopped, they looked across at us, scratched their bodies and went back to grazing. They will even enter the property looking for something more delicious. Cockatoos, Galahs, Kookaburras are also our feathered friends here in Trentham.