On Wednesday we visited one of the most extraordinary places we have ever seen.

As the finale to a day out with friends Niall and Antoinette doing the 'Painted Churches of the Gartempe Trail' we went to see the Merovingian Necropolis at Civaux. Simon had discovered the ancient cemetery whilst surfing the internet and we were so intrigued we were determined to go there. It's less than an hour from home so it made a great end to a day that had already included some real 'wow!' moments.


Modern and Merovingian graves.
That's the tallest nuclear plant cooling tower in France in the background... 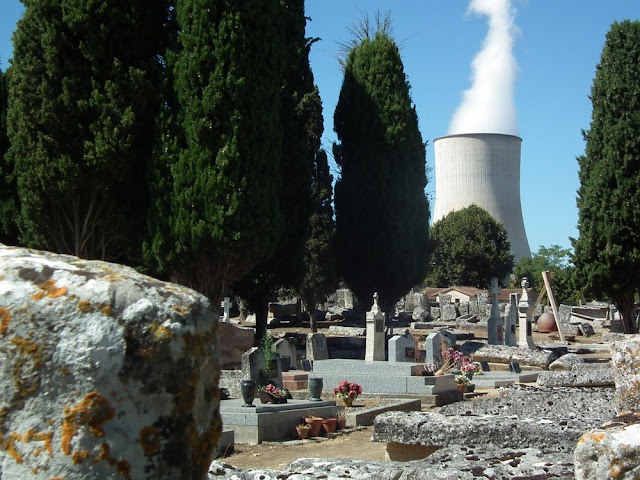 One of the things that intrigued us was the fact that we knew of Civaux, a small town the size of Preuilly, for some much more modern 'attractions'. First, it is the site of one of France's nuclear power plants, and the steam rising from the cooling towers can be seen for miles. Second, next door to the power plant is a large aquatic centre, which uses the warm water from the cooling towers in the pool, spa, and scuba diving training tank. Third, also next door is Planet of the Crocodiles, a domed zoo specialising in crocodilians, which I assume also uses the warm water from the nuclear power plant. As soon as we came over the hill across the river from Civaux and saw the towers looming, Simon announced his aim photographically was to get a shot of the Merovingian sarcophagi with the cooling towers in the background. Once we got there and parked by the cemetery, even though we had seen photos, we were simply gobsmacked by the extent of the site and the ambience, the sense of mystery and uniqueness. 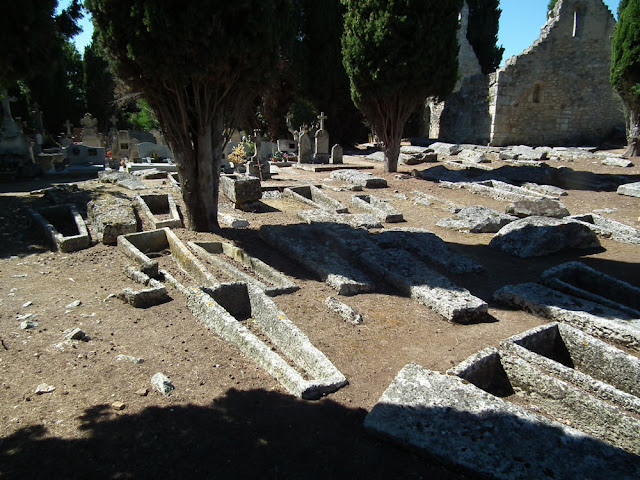 The Merovingian Necropolis is entirely enclosed by sarcophagi lids, turned end on so they are set like menhirs, forming a unique boundary of 90m along each side. In addition, inside the cemetery several hundred sarcophagi are visible, some in their original positions, some that have been moved. Most of the sarcophagi are in the north-east corner, close to the chapel.

The majority of them date from the Merovingian period 500 - 800 AD. They are trapezoidal in shape and most are decorated with a three barred cross, characteristic of Poitevan ornamentation at the time. The oldest dates from about 400 AD (and there may be Roman coffins in the mix as well). Originally the sarcophagi were shallowly buried. Many of them are now above ground as a result of digging vaults in the 19th and 20th century. Those that are still in situ are aligned east-west, with the head at the western end so that the deceased can watch the rising sun. The stone coffins without lids can weigh up to 800 kg. They are made of limestone from a quarry just across the river Vienne.


The cypress and sarcophagi central alley. 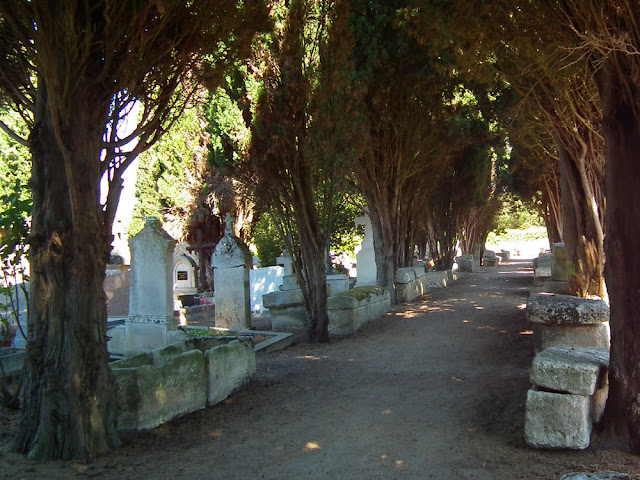 Drawings from the 18th century show that the enclosure of sarcophagi lids was already in place by 1747, but that the necropolis was once vast, extending to the north and the east and covering more than 3 hectares. It seems likely that the enclosure was created between the 15th and 18th centuries in order to limit the size of the necropolis. There is a central alley of cyprus and sarcophagi, created in the 20th century. The current enclosure only covers a quarter of the original site. It is estimated that it once contained between 7000 and 15000 sarcophagi. Over the years they have been reclaimed as building material (paving stones, blocks of stone), troughs and to make stock watering places. After the sarcophagi had gone the land was cultivated.


Mission accomplished.
(And you can just make out the three armed cross on the lid of the coffin on the right.) 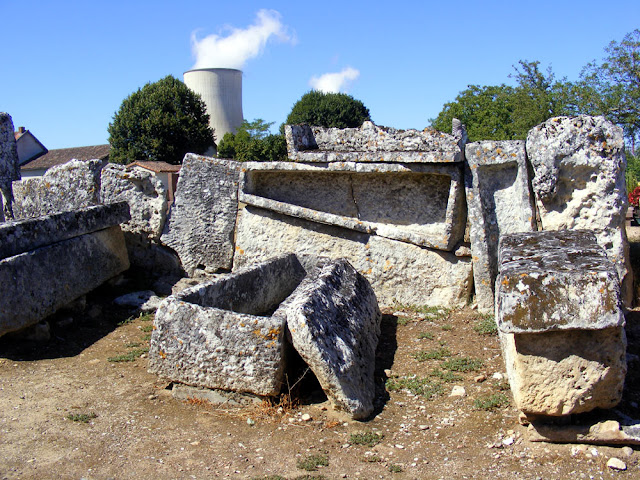 There is a legend associated with the site to explain the large number of sarcophagi. According to the local story the graves belong to the Frankish warriors of Clovis who were killed in the battle of Vouillé in 507 against the Visigoths. After the battle stone coffins rained down on Civaux. Modern historians think the place should be viewed in the light of the very early Christianisation of the area. The church and baptistry of Saint Gervais and Saint Portais was established at Civaux and was where large numbers of the faithful chose to come to be interred because of the reputation of the sanctuary with its relics of this pair of important early saints. Thus they hoped to facilitate their ascendance to heaven. Or it could be that for some reason there was a monopoly on the manufacture of sarcophagi and burials at Civaux.

Before the Merovingian necropolis part of the site was a Roman cemetery, and some of the Merovingian sarcophagi covers are reused Roman columns cut in half. Today the enclosure serves as the modern cemetery. There can't be many places that have served as a burial ground for two thousand years.

Interesting stuff. We saw where sarcophagi were dug, chiselled out last year. Typical we have driven past this place many many times on our way down to Limoges. Had we known about it we would have called and had a look... Tant Pis...

And you could have combined it with a visit to la Planete des Crocodiles!

Really interesting place with unanswered questions. Did you visit Saint-Gervais-Saint-Protais in Civaux?

Yes, we visited the church and looked at the archaeological dig next door, but didn't go to the museum due to running out of time.

Fascinating. I never know what you two will come up with! That's why I read every day.

Tell Niall and Antoinette I still miss their blog and if they ever start it up again, please let me know.

I can't make out the three-armed cross. Is it one of the variants on this wikipedia page?
https://en.wikipedia.org/wiki/Christian_cross_variants

Carolyn - the literature says cross, but to me it looks more like a carved representation the metal bands on a wooden box

Unfortunately the best preserved carvings are on the upright lids used as a wall, but the are buried so you can't really see the whole of the carving (although someone obviously has...)
https://farm9.staticflickr.com/8875/18173158778_9f785aaa25_o.jpg

Fascinating post as usual...
I've also been able to see the pictures inside one of the churches... Antoinette posted them today...
you had a really fscinating day...
meal out or picnic?

Well done Simon... that really is the old and new in the last piccy!

Except that I took that photo :-)

Picnic. The church at Antigny will most likely get more than one blog post.

Looking at the pix on Facebook, I can understand why....

Oh, it would be more difficult to take a photo looking in that direction without the cooling towers in the background. Both of us took several. He took the top one in fact.

Sorry Jim we must have missed that one...