An Apothecary in Issoudun

The Hospice Saint Roch constructed a new balustraded gallery in 1711. It completed the south wing of the Hospice, between the women's ward and a building which served as lodgings.


The laboratory side of the apothecary. 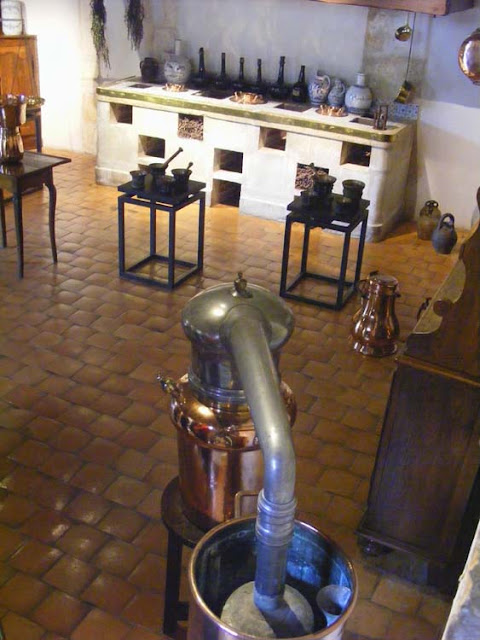 Three arcades created a quite low space which served first of all as a shelter and an open passage towards the gardens and the cemetery. Around 1750 the apothecary was installed there, a century after its creation in the 1640s by Jean Perrot, who was director of the hospice from 1644 to 1662.

Up until the beginning of the 17th century the sisters procured remedies from an apothecary in the town. Then Jean Perrot organised for an apothecary to be installed at the very heart of the establishment. He ordered dressers to hold the apothecary's equipment and earthenware trivets and pots from Nevers.

The large white lidded pot on the central desk was made for Jean Perrot in Nevers. 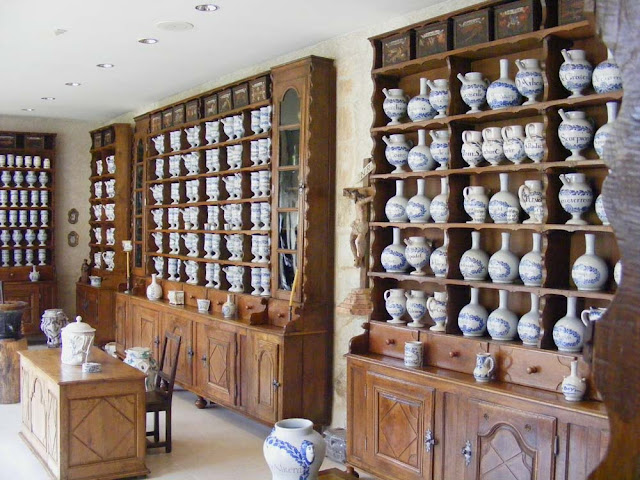 The space is divided into two, on one side the dispensary (Fr. officine), with its shelves and pots, on the other a laboratory. At the back there was the garden of medicinal plants and the cemetery.

Big copper jugs in the apothecary. 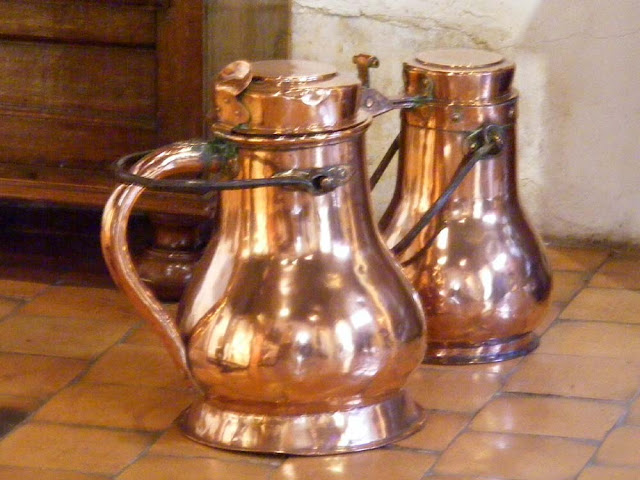 The shelves and desks are original furnishings, as are accessories such as mortars, chafing sets and books. They form one of the most complete apothecaries in France.

The range in the laboratory section of the apothecary. The apothecary sat at the centre of the hospice when it functioned as a hospital, just as it sits at the heart of the museum today.

These apothecary posts are just amazing....
and it is fantastic that it is so complete!
Interior decorators would give their eye-teeth for most of that stuff...
especially those pots, jugs and boxes!!
I just wonder how much that Long-vie jug would go for at auction...
way more than its reserve, I'll warrant...
there would be three types of bidder for that one!!
Thank the gods that no one decided to cash in and split this lot up....

As you can see by the number of posts I've done on the subject I was just blown away by how good this museum is.

The first time you posted photos of these apothecary pots, I was wondering what manufacture they were from. I suspected Nevers, but wasn't quite sure. In fact, I have two cylindrical apothecary pots, probably 18th century, that my father told me were from Nevers. They don't look at all like these, but more like the plates over the range. It is amazing so many treasures belonging to this Hospice were saved from destruction!

The plates may well be closer in age to your pots. The apothecary operated for about 200 years in this place.

It certainly is an impressive array and well presented.

Cannot quite work out if the kitchen is the sole/main hospice kitchen or a secondary kitchen associated with the apothecary's activities. Whichever it is, it is clearly very impressive. We must put it on the lengthening must-visit list.
As you would expect Susan I am impressed with the sophisticated potager. I assume that there is a chimney associated with the hood; and if these were put in place at the same time as the potager itself then it all becomes even more impressively thought out. Most potagers we have encountered rely on proximity either to a window or main fireplace for ventilation.
The potager allows for much more complex and controlled heating to take place; but I had not really thought of them except in the context of food preparation. I assume the potager would also serve an apothecary very well.

I thought you'd like the range style potager :-) As far as I know it is the apothecary kitchen not the general kitchen. I don't know when the hood was installed or if there is a chimney (although I assume there is -- naturally I have failed to take a photo of the section of the exterior of the building which would tell me).

it is La salle de préparation des médicaments, i.e. the room where medications/decoctions where prepared. There is no mention of a kitchen.

This means that this potager is not in a kitchen but in an apothecary's laboratory.

The info board in the other part of the apothecary refers to this room as the 'officine' and says the laboratoire is à l'arrière. So far as I can work out museum visitors don't get to go into the old laboratory. Officine should maybe translate as 'dispensary'.

Thanks for the links. I'll read them and see if I can figure it out.

Here is the Larousse definition of officine:
Local où les médicaments sont préparés, conservés et distribués au détail par le pharmacien, et où on procède à l'exécution des ordonnances médicales ; pharmacie.
It seems that officine has a very broad meaning, from laboratory to the actual shop. Laboratoire is more technically specific, where medications are actually prepared. And where that range would be located.llo

My problem with the nomenclature is that there is a third room of the apothecary which I haven't yet shown you. I think the museum info board must be referring to it when it talks about the magasin with its shelves and pots, and the division in two must be between this room and the room in the post above, which I will now call the officine or dispensary. That then makes sense of the phrase 'with laboratory behind'. These three rooms are in fact enfilade and you enter the room with the sophisticated potager style range first. The reason I have not included the third room in this post is because it represents a jump in time and a change in name for apothecaries.

I've rewritten the post to reflect the room name changes.

Btw, I wasn't using kitchen originally to mean a place where meals were prepared, but where cooking of a sort was done. This 'laboratory' is in essence a kitchen really. I was aware that office in French can mean small or galley kitchen or pantry, and assumed officine had a similar meaning.