What I did for my Birthday

Friday was my 56th birthday so as a birthday treat Simon took me to lunch and on a little outing. We went to Vendoeuvres, in the middle of the Brenne. Not as you might assume to birdwatch. Neither of us are bird nerds and winter isn't the best season for birdwatching in the Brenne.

We went almost on a whim. Simon had read that the church there housed a Celtic altar, and we knew the town had at least two restaurants offering a worker's lunch menu of the sort we like, although we'd never eaten at either before. 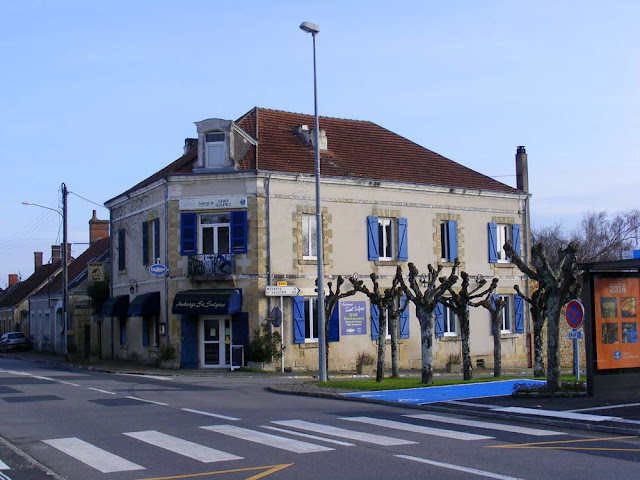 The aforementioned restaurants are both on Place Saint Louis. When we got there one was closed, so that made the choice easy. We ate at the Auberge Saint Sulpice, and very good and convivial it was too.

The menu du jour was tuna and tomato salad followed by mussels in cream sauce with what appeared to be proper homemade chips, cheese, and a dessert of three sorts of creme brulée.


Me peering into the limpid depths of the magic spring in the forest. 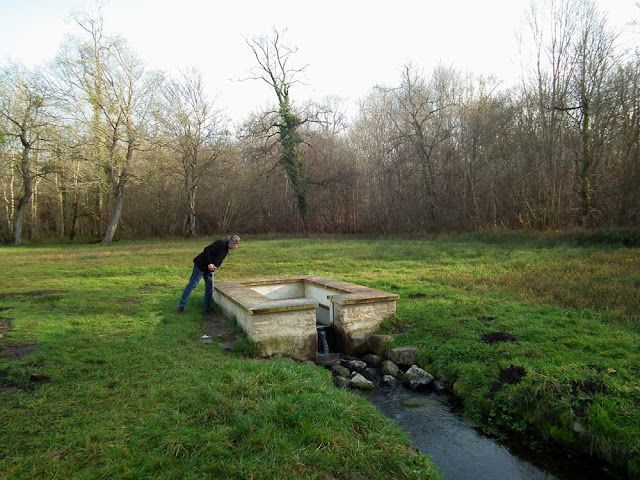 The salad and main were both simple and very tasty. The chips were excellent -- hot, crisp on the outside, floury on the inside, the best I've had for a very long time, and these days it is rare to get chips made from scratch in the kitchen. The cheese was dull, just camembert and a hard cheese of some sort. The dessert came in three tiny pots, all with their sugar flaming. They were vanilla, coffee and chocolate flavoured. The whole lot, plus coffee and wine, came to under €30.

We noticed that the paper serviettes had a picture of a chapel printed on them and we asked if the chapel really existed. 'Oh yes,' we were assured, 'it's just down the road. Turn right at the stop sign then turn left at the bridge, towards Neuilly le Bois.'

Me waiting while Simon photographs the gallo-roman altar. 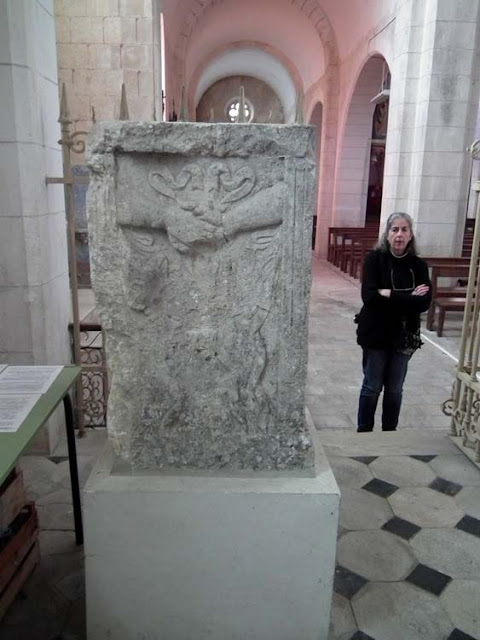 So off we went, after lunch. The chapel, and its inevitable magic fountain, is hidden in the forest in a lovely peaceful location. We were charmed. After inspecting it inside and out, marvelling at the quantity of water flowing from the spring and enjoying the sun we returned to Vendoeuvres to check out the church.

The day was incredibly mild. There was no need for a coat outdoors, and it was probably the warmest birthday I've had since we left Australia. The church was noticeably chilly nonetheless, and much colder than outside. The altar turned out to be gallo-roman strictly speaking, and is displayed in a side chapel.

More on the chapel and the gallo-roman altar will be forthcoming in future blog posts.
Posted by Susan at 09:00

Email ThisBlogThis!Share to TwitterShare to FacebookShare to Pinterest
Labels: Food and Drink, the Brenne, Towns and Villages near Preuilly

A belated 'happy birthday', Susan. Looks like you had a lovely day out and a good lunch out. I've made a note of the restaurant. I think you should turn your birthday into a birthday weekend...

Happy belated birthday....
you look to have had a nice day as well as an enjoyable one...
T&P

It's tempting of course...

It was very nice indeed.

Happy belated birthday.
Looks like a great day out.

What a nice way to celebrate your birthday! Warm belated wishes from Belgium.

Thank you, it was.

Thank you, it was a lovely day.

Happy birthday, Susan.
Trust you two to find a good yet inexpensive restaurant and a secluded chapel.

Our restaurant radar is always fairly good. The chapel was just luck, and because we asked.

Happy Birthday, Susan. So glad you had a lovely day.

Hoping we are not too late to offer our birthday wishes. Isn't he a noyce bloke to take you for lunch. Although we have not commented much, we still follow you guys. It's just that our life with our house sale and moving has taken all our energies in recent times. Have a great Chrissy you two.

I'm glad you had a nice birthday, it's the kind of birthday I would have enjoyed.
This mild weather seems odd but now we're back in England I like it better than the frost and cold we're more used to at this time of year.

I heard you sold your house. I'm not surprised you don't have time for anything else. You have a great Christmas and New Year too.

Thank you for the lovely card! This weather is getting really weird now. I never know quite what to wear.