Hah! I bet you thought the apple recipes had finished and the billion trillion apples dealt with. Not quite yet, but we are getting there. The apples are down to one big tray and one small tray, and this recipe uses a whole kilo of apples. Hurrah!


Apples, peeled, cored and diced, ready to be stewed. 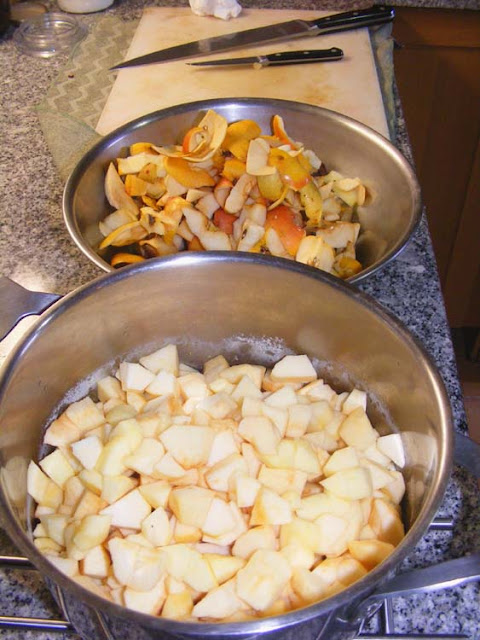 Apple Snow, which I figure is neige aux pommes in French, is the sort of dessert that in its simplest form you may well have seen quite often on the table in your childhood, made by your mum. Usually it is just stewed apples and uncooked meringue, sometimes with the addition of lemon and/or whipped cream. Although quite common and well known (but old fashioned) in [some parts of] the Anglo world, it appears to be almost unknown in France.

Stewed apple, with just the right proportion of purée to dice. 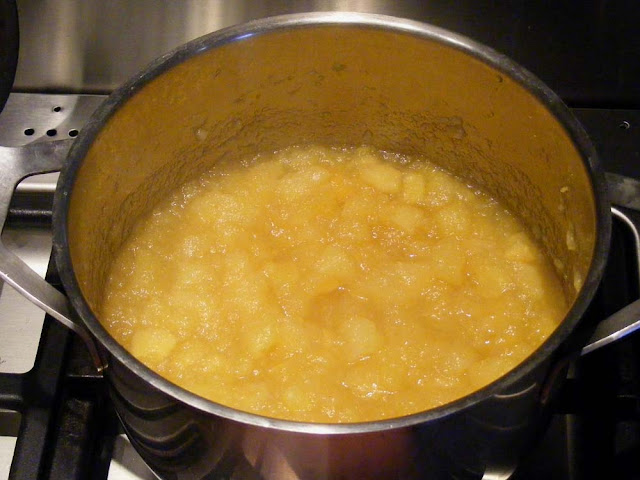 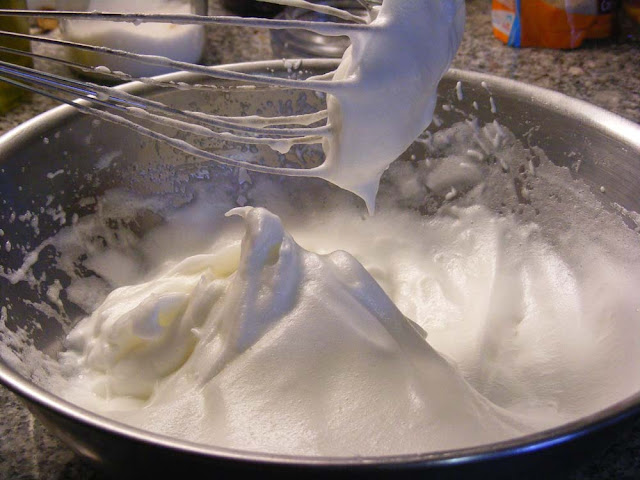 Since I was making the dessert as my contribution to the shared lunch at our foie gras workshop I thought I would make a slightly more sophisticated version (pour les grands means 'for grownups'). Apple Snow is essentially a syllabub (ie cream or milk thickened by whipping sweet wine or similar into it and often folded through tart fruit, sometimes with meringue). The English have been eating it since Elizabethan times. 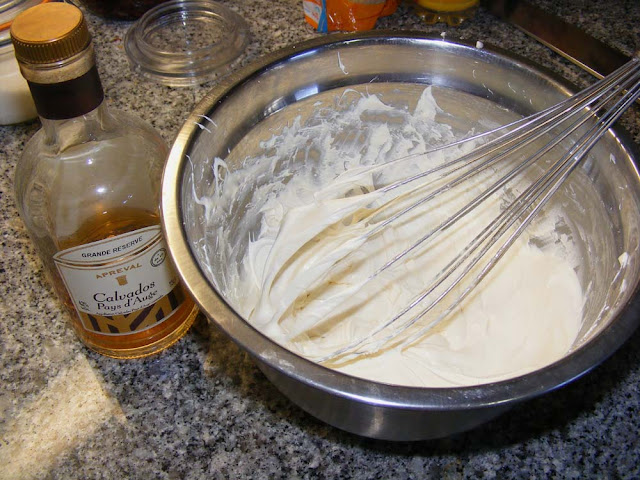 Ingredients:
1 kilo apples (use several varieties, some which will turn to pulp and some which will hold their shape)
½ cup water
Juice and grated zest of 2 limes (or lemons or oranges)
120 g sugar (for the apples) + 50 g sugar (for the meringue)
4 egg whites
200 ml cream (must be suitable for whipping)
¼ cup calvados (or cider or pommeau)
Powdered cinnamon or ginger (optional)

Method:
I nearly forgot to take a photo of the finished dessert... 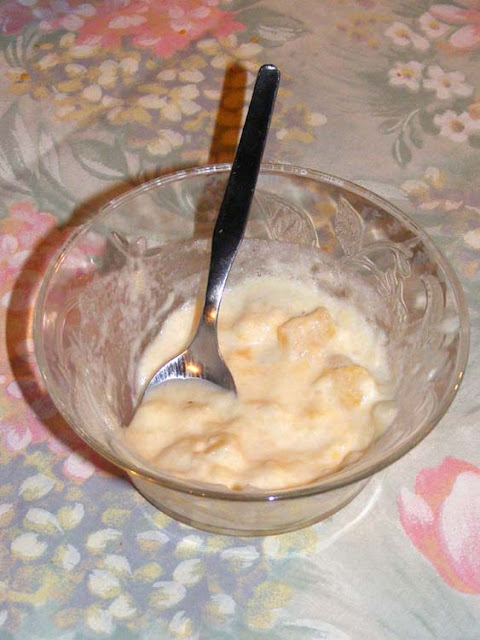 Malibou....
Stone's or Greens would be too powerful against the other flavours...

On the other hand, I'm not sure I could survive the shame of owning a bottle of Malibu...

It s interesting to note that the word meringue has different meanings in French and in English. In French, egg whites whipped stiff are called blancs montés ou battus en neige and that is what is used in your recipe, if I understand it well. On the other hand, meringue is the result of blancs en neige cooked in the oven, whatever the length of time. In what is called floating isle, île flottante or œufs à la neige, the stiff egg whites are poached and not meringués.

As an afterthought, I used to separate yolks from whites in the eggs I used for the batter of my clafoutis recipe. I whipped the whites stiff and delicately mixed them into the batter which became more fluffy.

If I were younger I'd try your recipe! LOL Can't be bothered nowadays.Looks and sounds delicious!

I had never heard of Malibu Rum from Barbados until today. In the old days, here in Washington, D.C., and vicinity, Mount Gay, also from Barbados, was the only available decent rum that my friends and I used to make P'tit Punch, like in Martinique. Now, rum from Martinique is widely available, but I still stick with Mount Gay. Force of habit?

Thanks for the French lesson. That's useful to know. In English it's all meringue, but if you wanted to be clear you might say uncooked meringue, poached meringue or baked meringue to distinguish between the three methods. All of these are French meringues in English culinary speak ie sugar beaten into whipped egg whites, cold. You can also have Italian or Swiss meringue, but they are somewhat more involved and tricky to make, with hot syrup and bain maries.

In fact you wouldn't see me using Malibu. It was super fashionable when I was in my twenties. Pina coladas was what young Australian women who wanted to look sophisticated would drink. I've never liked rum, even after tasting good quality Jamaican brands.

I've never heard of Apple Snow. I don't think it's known in America at all, and Walt says he's never heard of it either. I don't see anything like it in the Bible of American cooking that is the Joy of Cooking. Is it especially Australian? Or maybe British? Whatever, I'm sure it's good. In general, Americans are not too thrilled with the idea of eating raw egg.

In the U.S., meringue is usually cooked. The most famous dessert containing it is lemon meringue pie. In the U.S. South, people also make "banana pudding" topped with meringue. In both, the beaten egg white is baked on in the oven until it is lightly browned.

CHM, I wonder what this sentence from the Larousse Gastronomique means:

I found an answer in Julia Child. One kind of meringue is made with egg whites that have been beaten with granulated sugar (à cru I assume). Another is made by beating hot sugar syrup into the egg whites (à chaud).

Find a bar that serves it...
go in with an empty jar and order a straight Muckyboo...
pour it into jar...
and order yourself something nice!
Do this in front of the barman...
it is bound to start quite a conversation!!
Possibly find a bar outside Proolie...???

You could use a splash of Triple Sec for just a hint of orange with the pineapple and coconut....

Here's an interesting page about the different kinds of meringue.

I don't have any, but I've got Cointreau. That would work, or even my home made sour cherry liqueur.

Thanks for the link. That's a good article.