The thirty one painted oak wooden boxes from the beginning of the 17th century, the legacy of Master Maré, apothecary to the Hospice Saint Roch in Issoudun in 1646, are amongst the oldest of their kind in France. They feature a rich ornamental decoration of flowers, animals or human figures. A Latin inscription in the upper cartouche identifies the remedy contained within. The use of wooden boxes, in chestnut or oak, sometimes cylinder shaped, was advocated from the Middle Ages to keep hydrophilic drugs, dried plants, roots and barks, gums, resins, horns, nails, bones and ivories.


Pyrethrum was used in poultices for headaches.
I have no idea why it is represented by a boar-cum-fish. 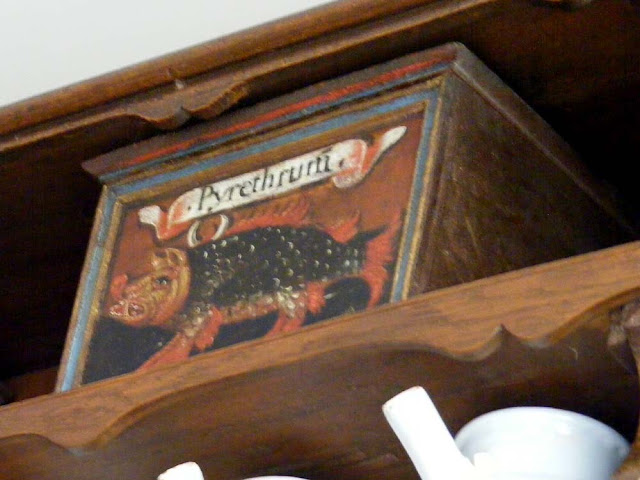 Rabelais described them from 1534 in the prologue of Gargantua: [My translation] Silènes* were small boxes which you used to see in apothecary shops, painted on the outside with joyous and frivolous figures, like harpies, satyrs, bridled goslings, horned hares, basted ducks, flying bucks, lemon tree antlered stags, and other such painted enjoyable counterfeits to make everyone laugh...but inside them they store fine drugs like balm, ambergris, cardamom, musk, civet, jewels and other precious things.'


Labdanum is a resin from rockroses Cistus spp, gathered in medieval times
by combing it from the hair of the goats that grazed on the shrubs.
There is no connection to unicorns so far as I know. 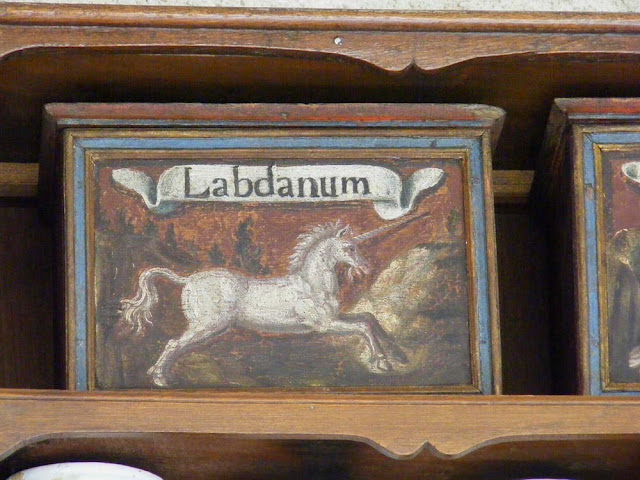 The painted representations of strange animals, associated with products from Asia or the Americas are borrowed directly from scientific works of the 16th century, such as 'Monsters and Prodigies' by Ambroise Paré, published in 1585 or the 'Universal Cosmography' by André Thevet, from 1575.


Opium has been used as a painkiller since Neolithic times. I'm interested
that the image on the box is not of bog standard single lilac coloured flowers, but of a fancy (quite common) mutation which produces flowers like a pompom. 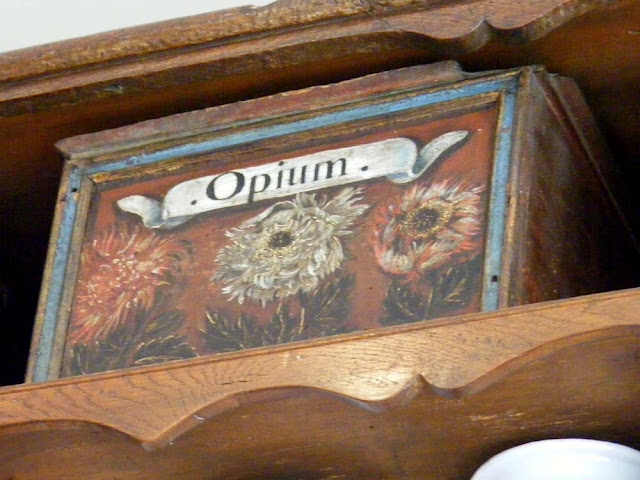 *There doesn't seem to be an English language term for these boxes.
Posted by Susan at 09:00

Email ThisBlogThis!Share to TwitterShare to FacebookShare to Pinterest
Labels: Packet of Three, Towns and Villages near Preuilly

You may have no idea...
but I've got a right "boar-cum-fish" this morning...
sums it up perfectly!!

Labdanum is a musky, woody perfume ingredient...
used a lot in mens' perfumes...
and in incense sticks...
no idea why it was considered a medicine...
I might have to hit Wiki...

I hate... almost to their destruction...
"double" flowers of simple originals....
with one exception...
these big, multi-ragged-petalled poppies.
There is something very attractive about them...
I think it is down to the ragged look...
I like the ragged-edged tulips as well.

All that seems to have made my "boar-cum-fish" worse...

Let me know when you are bored. So far I'm up to 2 January with a post every couple of days about this fabulous museum. Anyone who is bored will just have to hope that something exciting happens soon so I've got something else to blog about!

I hope your headache goes soon. The thing I like about poppies is that they are so willing to mutate into different fantastic colours.

I read that Pyrethrum is good to get rid of Japanese Beetles ( a pest if one considers how they attack the leaves of vines, corn, fruit trees and roses).

Pyrethrum, as in the natural extract from certain Chrysanthemums, is a fairly good general insecticide. These days the second generation synthetic pyrethroids are the most widely used alternatives to neonics, and what is usually the active ingredient in garden insecticides. Adult Japanese Beetles are apparently quite susceptible to pyrethrins and pyrethroids.

What I meant is this treasure-trove of a museum is a bottomless pit. The treasures, your words, this fabulous museum has to offer seem to be never-ending... As I said before, I had never been aware of its existence. I wish I had!

How on earth caananyone be bored with this seriess of posts...
I'm with chm... it seems to be a bottomless pit of wonders... please keep sharing!

I knew what you meant. I'm glad you are enjoying the series.