The polychrome limestone statue of Saint Catherine of Alexandria in the chapel of the Hospice Saint Roch in Issoudun dates from the end of the 15th century.

The construction of a new hospital in 1875 resulted in the abandonment of the former hospice. The administration in their wisdom at the time therefore set about selling several statues which formed part of the important sculptural decor of the chapel. Saint Roch himself, Saints Cosmas and Damian, Saint Peter of Verona and Saint Catherine of Alexandria were dispersed in 1906 into private American collections. Going first to the collections of the Wildenstein family and then to J. Pierpoint Morgan, Saint Catherine of Alexandria is today owned by the Metropolitain Museum of New York. The work has been on loan from the Met since 1995. 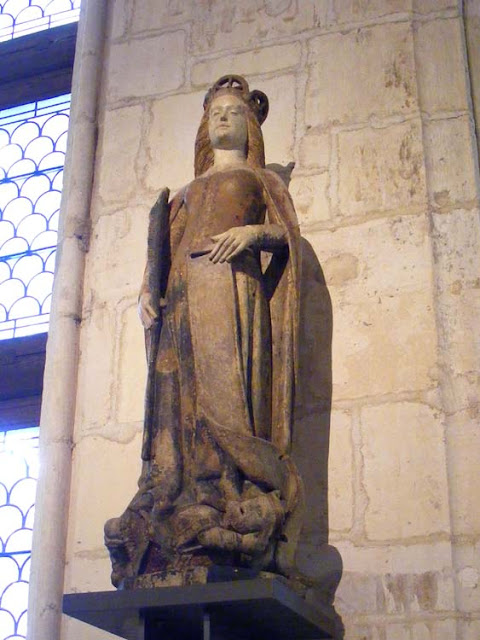 Saint Catherine, of royal descent, is richly clothed in a purple cloak. She holds a palm frond in her right hand, the symbol of her martyrdom. She unrolls from her left hand a phylactery (speech scroll) which carries the inscription 'Ora pro nobis' ('Pray for us'). The saint is wearing an unusual crown, formed from four wheel sections, which were to have been the instruments of her martyrdom, but which miraculously broke. She crushes her executioner, the Emperor Maxentius, victoriously under her feet.

Placed at the entry to the oratoire, as a pendant to the Virgin and Child, facing the open doorway to the sickroom or hospital ward, for the poor bedridden inmates she represents a hope of cure and a return to good health.

Thank you for sending wisdoms out to people in need of more wisdoms. I think I've read them all! I knew I was going to enjoy your blog when you published a photo of Susan reading, bundled up in a hooded jacket, in a tent, indoors.

I'll second that! It's good to open my laptop each morning on the Antipodes to enjoy the wisdoms of your blog. Thanks for your perseverance.

Thank you both for your kind words.

I have only just started reading your wisdoms but they are pitched perfectly for me- geographically half way between Australia and France (in Bangladesh) but getting closer as we prepare to retire to France. Susan your wisdoms already help me put my head in the right place, even if chestnut flour might never prove to be available in Dhaka. I hope you can continue.

Once you get to France chestnut flour will be easy to get. I bet there are loads of things you can get in Dhaka that you will never see in France though.

It does seem like quite a lot, although I am not convinced that the blog isn't just mostly noise. I've been amazed how easy it has turned out to be to write something every day.

I look forward to your posts when I open the laptop each day - how you find the time and the energy I don't know but I'm jolly glad that you do.

It's at the expense of housework.