This rather nice external staircase is typical on vernacular buildings in the Loire Valley, south-west France and probably many other regions in the country. The one in the photo can be easily seen from the path up to the Source Saint-Marc in Chaumussay. 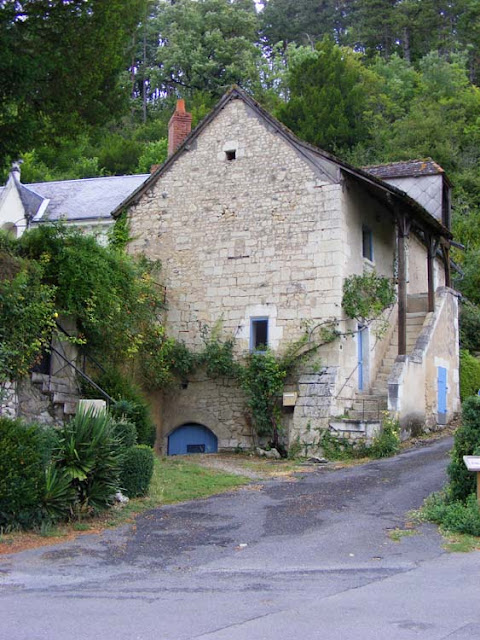 Staircases like this first appear in the 15th century, providing access to the interior of the house, which sits on two floors, plus attic, above its semi-underground cellars. Staircases themselves don't get to be integrated into the body of the house until the 16th century, and even then they were open to the elements very often. Since they acted as chimneys drawing warmth upwards they were problematic in an age when heating was difficult. If you wanted to access a different floor of the house it was normal to step outside onto the staircase, go up or down, then back in. The staircase itself was sealed off from the interior of the house to retain warmth inside and to ensure the staircase took advantage of natural light. In higher status buildings staircases were often enclosed in their own tower, attached as an annex to the main building. But even the grandest houses such as the chateau of Azay le Rideau had staircases which were originally open front and back, and it was not until the 17th century that fully enclosed internal staircases became the norm for grand houses. The open external staircase persisted for rural vernacular buildings well into the 19th century in many cases though.
Posted by Susan at 09:00

There is another wonderful rural one in the hameau of Corvaux....
off to the right as you leave GP for Barrou...
drive through and it brings you back onto the Barrou road...
the house is dead ahead as you bear right in the middle of the hamlet.
It is nice to know the reasoning behind them.
The old village of Rey in Caithness has three buildings on the roadside with these staircases as well...
but, being in the Highlands....
where the men wear skirts and the women wear the troos....
there is no roof to the stairs...
just a porch type roof before the bedroom door.

Mind you... in the real depths of winter...
September to May....
the whole family would sleep in the kitchen!!

Is Corvaux the village that has seceded?

Interesting and new knowledge for me. Very useful for my 'learn something new everyday' objective. Now all I have to do is to remember to remember it! :0)

Useful picture for comments you make Susan. Judging by the gable end on the right hand side the roof covering over the stairway is not original, nor perhaps the stairway itself. Under the stairway is perhaps storage or space for goat or dog. Incorporated dog kennel is quite common. C19/20 house design seems to have forgotten about heat loss via open stairwells. It gets complicated of course by a common desire to show off the stonework or joinery of your staircase. Terrace houses in the UK often closed up the stairwell with a door at the bottom – very sensible.

Indeed, remembering to remember is the tricky bit.

I would have guessed that the staircase and part of the house to which it is attached are the original bits and the house at right angles and behind is younger. I think the storage under the stairs is currently gardening tools, but a dog could easily have been the original occupant. Our house here had the original staircase enclosed. It was horrible aesthetically and meant you lost a lot of natural light. That was the main reason we chose not to enclose the new staircase, but we debated a long time about the heat loss problem. Closing off the back of the house by closing the spare bedroom door and good insulation in the roof have been our solution.

It had... I'm not so certain that it is still it's own entity.
Shame I didn't readthis this morning, I could have asked Callie at the Cristmas Carols at Lascelle's Gurnard!

When I was there in the spring it still had a sign saying it was independent.